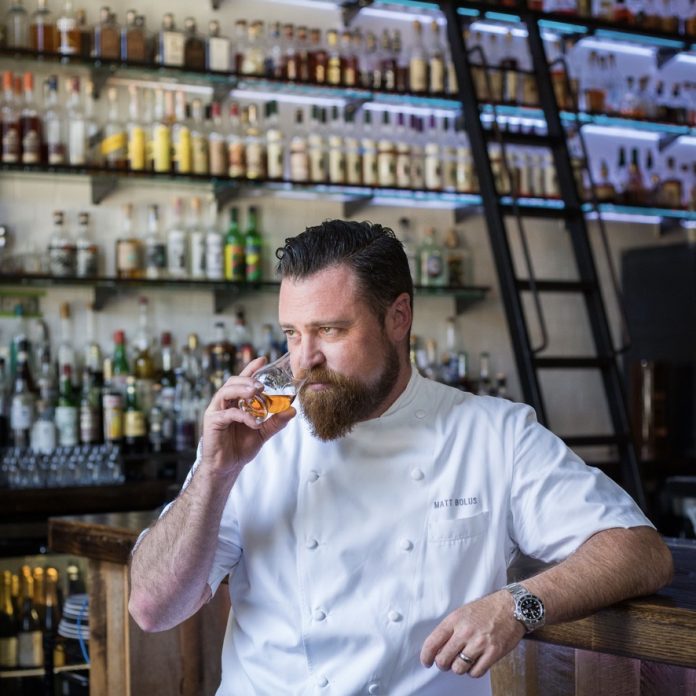 Editor’s Note: This article was originally published in Issue 92 of The Bourbon Review Magazine.

Chef Matt Bolus of The 404 Kitchen in Nashville was pretty much born with whiskey in his blood. “I was born in Louisville and raised in East Tennessee,” he explains. “Like a lot of babies in my time, my dad used to rub whiskey on my gums when I was teething to get me to stop crying. Where I’m from, it’s just born into you. Like why do little boys like to blow shit up? Because we’re boys!”

The love of whiskey ran deep in his family. “My great uncle was the chief litigator for Brown Forman, and my Southern Baptist grandfather used to hide his whiskey behind the bread because he said his Baptist neighbors wouldn’t look for it there,” he recalls with a cackling giggle. In fact, that sharp snicker is one of the first things that you notice about the chef, along with his impish grin and epic beard trimmed to a diabolical point. But anyone who spends much time at all around Bolus will quickly discover the chef’s other major defining characteristic: an abiding love of brown liquor.

At Gertie’s, his whiskey-centric bar on the ground level of The 404 Kitchen in Nashville’s burgeoning Gulch neighborhood, the walls are stacked high and wide with more than 700 different varieties of whiskey. (“We’re not a clear spirits bar,” notes Bolus drily, “Not even white dog.”) A set of private lockers dominate one side of the bar, dedicated to members of The 404’s Whiskey Club whose members are graced with special bottles from the chef’s single barrel whiskey selections.

While it’s clear that the whiskey collection at Gertie’s has grown to epic dimensions, Bolus assures that it’s all designed around his customers’ desires: “I like to say we’re in the whiskey selling business, not the whiskey collecting business, but sometimes my business partners might disagree!” It must be going well because his good friend Drew Kulsveen of Willett Distillery in Bardstown Kentucky recently told Bolus, “Damn, you sell a lot of whiskey! Every time I look at that wall, I see more white and less brown.”

It didn’t start out that way for Bolus. After years working in the kitchens of some of Charleston’s and Nashville’s best restaurants, he finally got the chance to open his own spot for the first time at the original 404 Kitchen location, across the street from where he now works. Constructed in a repurposed shipping container attached to a luxury four-room boutique hotel, the dining room and kitchen at 404—1.0 were both tiny; so small that Bolus once joked that the only way he and his kitchen staff could make it work was, “thanks to olive oil and bicycle pants.” Still, that team of talented chefs created some remarkable food in those conditions, a menu of locally-sourced meats, seafood, and vegetables prepared with innovative techniques and bold flavors.

Even with the paucity of space of a six-seat bar that was barely larger than a coat closet, Bolus knew he wanted to showcase his love and knowledge of whiskey. “I decided I wanted to have the biggest bourbon selection in the smallest bar in Nashville,” he explains. “But we had to make choices because of the limited space as we grew from 40 bottles to 100 to over 300 after we built terraced shelves hanging off to hold them all. We knew we couldn’t carry everything, so that’s when the curation began. Instead of stocking full lines of whiskeys, we would just find a Single Barrel Jack Daniels we liked or choose our favorite Elijah Craig.”

Bolus soon started seeing the positive results of his efforts from both his customers and suppliers. “We started getting the reputation as the place to go when people would say, ‘Oh, I see you have every release of Stagg, Jr.’ I was able to make sure we did by checking the proof of every delivery to see if we already had that release. It was like collecting baseball cards.”

Despite what his partners mighty occasionally think, Bolus says this maniacal focus on whiskey has been a good business decision. He explains, “Distributors realized what we were doing. Some executives from Beam Suntory came in one night, and I was proud to tell them that I was the only place in town that had Batch 1,2 and 3 of the new Knob Creek 15. They asked about Batch 4 and 5, which I didn’t even know existed. The next week they sent me those two bottles!”

Bolus appreciates the benefits he has earned, but he tries not to get greedy with his customers. “Our allocations are bigger now because we’ve built up relationships with distillers, so we can occasionally ask to see if they can find any more of a particular release for us. But when we do receive it, we share it. We recently made a big deal about selling our one bottle of OFC at cost for $100/ounce, even though bottles were going on the secondary market for three times that. We just decided ‘Let’s have fun with this!”

Where Bolus really has his fun is in the pursuit of single barrel selections, which frequently takes him out of his restaurant to distilleries across Kentucky and Tennessee. Of his current batch of barrel picks he notes, “We’ve got bottles from 38 private barrels in stock right now. It’s a business, and you’ve got to be willing to buy when you can. I love picking barrels because you get to experience the true nuances of whiskey. Single barrels can be earth-shattering!”

His friends at Willett are a frequent destination for his hunting trips. “Drew says I always look for ugly barrels, but we have so many conversations about the barrels. Where was the wood harvested, and how was it aged? Was there a leak? Was it near a window in the rickhouse? Does that window have glass in it or just mesh to keep the birds out? There’s so many variables that go into it. Great whiskey comes from a combination of mashbill, wood, and time, all of it. One of the things I love about Willett is that every bottle essentially is different. They’re all single barrels, Drew kind of revels in that. I don’t want monogamous flavor.”

Two of his favorite recent Willett selections were produced, barrelled and bottled at the exact same time. They were aged for five years, with one stacked directly above the other one on the next shelf. Bolus reveals, “They were completely different whiskeys. We called them ‘Top Bunk’ and ‘Bottom Bunk.’ I bought them both of course, and we only got 100 bottles out of one of the barrels and 50 out of the other.”