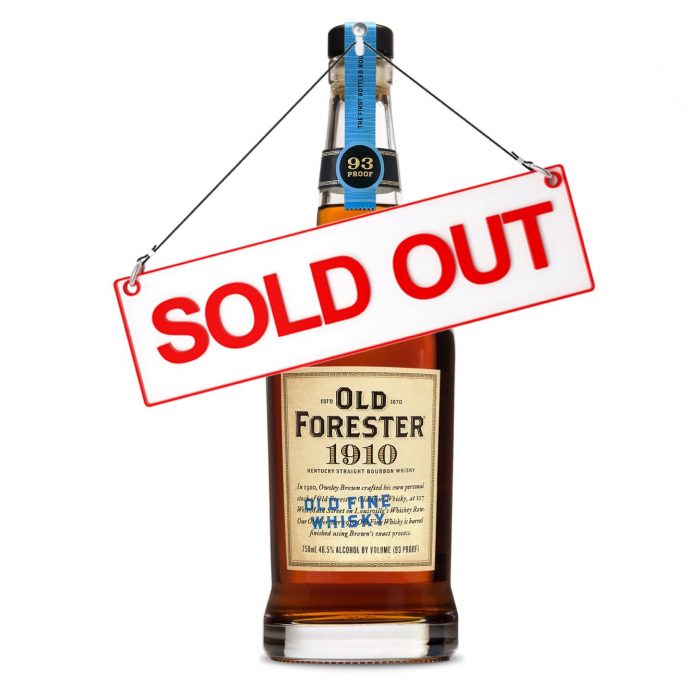 Here’s hoping you stocked up on Old Forester 1910 Old Fine Whisky, because it’s basically going to be unavailable until the second half of next year.

The Bourbon Review received a tip yesterday that Old Forester had some bad news for fans (which happened to be good news for the brand). Sales have wildly surpassed expectations, and this delicious, double barreled bourbon is pretty much out of stock.

Here’s exactly what has happened, according to Old Forester:

TBR: How could you do this to us?

Brown: We are running dangerously low on supplies at my house, too. We are all in this together my friend.

TBR: Was it something we did?

Brown: I wish I could blame you but sadly, it’s on me and and the risk of using past performance as an indicator for future demand…usually that works pretty well…

TBR: Are you surprised about the popularity?

Brown: Delighted is closer to the reaction around here and to be honest, the last three releases have exceeded expectations on a bunch of levels (1920, Statesman and 1910). We put a lot into the Whiskey Row series. We think it’s a fun way to focus in on how proof, wood, filtration, maturation impact the flavors of what is a common mash bill. 1910 has revealed so much bold chocolate and the obvious nutty/woody flavors, and it’s lovely to see [everyone] react this positively to our final Whiskey Row entrant!

TBR: So what’s the plan, here?

Brown: We are feverishly trying to restock! In the meantime, we’re working closely with our sales organization and production team at the Old Forester Distilling Co. to manage a fair allocation process. It’s not perfect and you hope to avoid these situations… and mostly we do.

TBR: What’s the estimate on the next batch?

Brown: So, it takes about a month of lead time to custom make the second barrel at the Cooperage. Depending on how the barrel ages—it could be 7 months, it could be 9 months in that second heavily charred, lightly toasted barrel. Then, add another week it takes for us to process and bottle a run at the Old Forester Distilling Co. so, we think the next round will be ready this summer.

So yes, we hope you stocked up. If not, well, there’s always Labor Day.