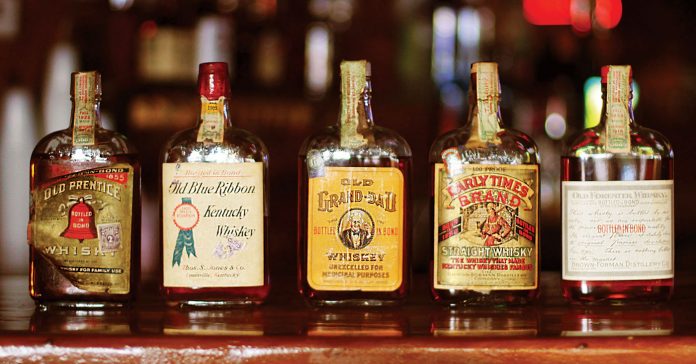 Kentucky stands at the precipice of a new ‘era’ for Bourbon Tourism – the implementation of the vintage whiskey laws set to take effect on January 1st, 2018. The vintage whiskey laws passed earlier this year have been in pre-implementation stage, where select stakeholders have worked towards a better understanding of both how the laws will be prosecuted and of what burdens of consumer protection will be absorbed by those dealing in vintage whiskey. Tomorrow marks a historic milestone, where the general public will gain a first-hand look at what the landscape for vintage whiskey in Kentucky will look like. Starting at 11 am EST (on Wednesday, Nov 15th, 2017), the ABC will host an open-comment forum in their Frankfort office, and members of the public are welcome to come and hear the current regulatory interpretation and ask general questions to get a sense of what this new ‘era’ is likely to yield.

As a proud Kentuckian, a publisher of The Bourbon Review, & a bar owner (Belle’s Cocktail House), it will be difficult to reconcile a procedurally-prohibitive landscape for vintage whiskey. Like so many other parts of our life, the interpretation of the rules and the burdens of enforcement have very real consequences, for the positive and negative. What will be considered “vintage whiskey”? How are we to prevent consumer health impacts from contaminants (unintentional, or otherwise)? How will these transactions be taxed (ostensibly, they should have been taxed upon the original production & sale, but the oversight of this new class of spirits should be revenue-neutral, at the very least)? Who will be authorized to buy, and sell, vintage whiskey? What will the licensing process look like? Will there be a limit to how many bottles one may purchase, or sell? What burden of authenticity will be required (I.E. an unbroken “tax stamp”), and/or documentation of source origin? There are numerous stakeholders, not the least of which is the ABC, who will be tasked with enforcement. Let it not go without being said, the ABC’s reputation for fairness and professionalism is well known among those in the “industry.” As journalists, we don’t often have an opportunity to laud their accomplishments, and the consumer wouldn’t have a reason to inquire absent any attempt to enter the industry or second-hand knowledge.

For consumers, we are willing to make tradeoffs as part of our social contract. We generally prefer less friction, if given the option; but we also feel safer engaging in a less shadowy marketplace, where the light of legalization can bring about a more efficient marketplace. The current Bourbon Boom can perhaps be best characterized by the demand for unique expressions; unlike previous “booms” (wit. early 1960s), where Bourbon was more of a commodity. The demand for unique & authentic Bourbon Tourism experiences is the single greatest opportunity of my lifetime – period. More than 2/3rd of the US population lives within a day’s drive of Bourbon Country; California does not enjoy this same competitive advantage.

It is vital for the Commonwealth of Kentucky to seize this moment in a meaningful way. During a recent work trip to the Spirit of Speyside Whisky Festival (Scotland), I dropped in on the JW Steakhouse in London (U.K.) to witness firsthand the legal purchase of vintage whiskey. While sitting at the bar and watching the sun set over Hyde Park, I casually observed a table of executives from the middle east sharing a bottle of 1916 Old Forester. They moved on to a bottle of 1911 Old Overholt Rye (pint sized) and concluded with a bottle of Cabin Still (Stitzel-Weller, circa 1970s). Their tab was $25,000 when it was all said and done, which included a meal in combination with the London-based pricing and relative scarcity of the pre-prohibition vintage whiskey. Now, to be clear, that is not MY way of enjoying vintage whiskey. But this market exists, and the demand is growing. Other places in the US have embraced vintage whiskey (Jack Rose, in Washington D.C.; among other places in Washington & North Carolina) and one of the best features about the vintage whiskey market is that there are cost efficient ways to sample some smaller 50/75/100mL bottles, for less than $25 or 50.

The casual reader may think ‘ok, why didn’t we do this before?’ More tax revenue, more options for the consumer… what’s not to like, right? However, some stakeholders have posed a legitimate question of whether vintage whiskey will substitute or compliment the existing whiskey business. In our opinion, the net effect will be to compliment our existing Bourbon industry. Having said this, some producers have weathered decades where Bourbon wasn’t in vogue. They have endured entire generations when the return on investment capital was meager (or non-existent), and their current business models are built on trying to deliver a product that is in short supply and for which they have listened to the consumer and expanded production. Some of the producers recall an entire decade of production expansion that coincided with shrinking margins & consumption of Bourbon (wit. the 1970s). One version of their logic reasons that by introducing the secondary market as an option for consumers to legally purchase & consume vintage whiskey, these options will reduce demand and consumption of the current supply. Said ‘current’ supply of whiskey is a function of production decisions (including demand forecasts) that were set a decade or more in the past, during which time vintage whiskey wasn’t envisioned to be a substitute. Other counter-arguments rest on consumer protection and concerns for counterfeiting vintage whiskey. I make no attempt to portray the counter-arguments in their entirety. At best, all stakeholders are introducing opinions and limited data sets that won’t fit our particular set of circumstances.

The impact to tourism in the Commonwealth of Kentucky will be significant. People already are traveling far & wide to legally purchase & consume vintage whiskey. It would be difficult to reconcile a world in which Kentucky does not fully embrace the opportunity to remain the ultimate Bourbon Tourism destination. Bourbon is a uniquely American product, and we should do what we can in Kentucky to remain the frontier of innovation. We need to embrace opportunities which hold potential to increase the value of our beloved Bourbon Country.