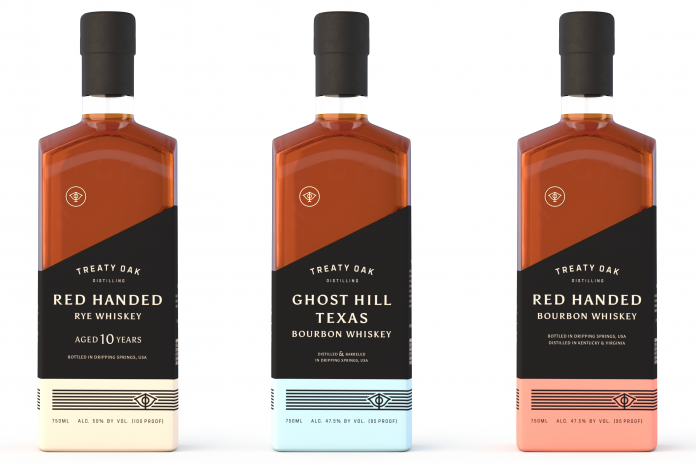 Treaty Oak Distilling has entered into a new partnership with Mahalo Spirits Group that will take it’s distribution beyond its home state of Texas to seven new markets.

The distillery, founded in 2006 by Daniel Barnes, consists of a team of distillers, sommeliers, botanists, and even architects crafting three whiskeys and three gins, now available in California, Florida, Georgia, Illinois, Michigan, Tennessee, and Virginia.

However, they’re also transparent when sourcing from outside partners.

“We find the best of the best and make it better,” says Barnes. “There’s no shame in that. The only shame would be blatantly misleading our customers.”

Their Red-Handed Bourbon and Rye feature the team’s favorite sourced whiskeys “stolen” from across the country. The Bourbon is an 80/20 blend of 2-year-old Oz Tyler Bourbon, Kentucky (70% corn, 21% rye, 9% barley) and 4-year-old Davis Valley Distillery Bourbon, Virginia (66% corn, 14% rye, 20% barley). Treaty Oak re-barreled the blend for four additional years in new American Oak barrels and bottled at 95-proof. Their Red-Handed Rye was sourced from the Schenely Distillery and aged 10 years at 100 proof, with a mashbill of 39% corn, 53% rye, 8% barley.

Click here to learn more about the distillery, including their gin offerings and tours.