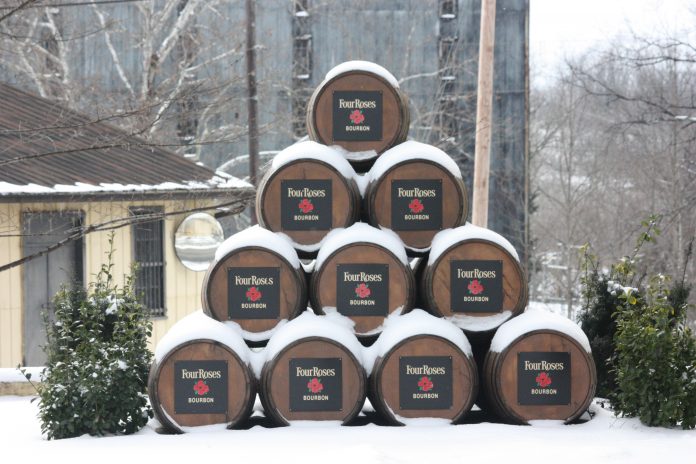 The temps are dropping in Kentucky this week, so we looked back through our archives to find out what kind of risk those poor barrels of Bourbon might be running of freezing all over the state. Originally published in the 2014 Spring Issue of The  Bourbon Review Magazine, this awesome read on the bourbon barrels, climate, and the cold weather will give you a little peace of mind while you curl up by the fire with your favorite pour.

When the ominously named Polar Vortex descended upon central Kentucky and a good portion of the rest of the country, delivering sub­zero temperatures that enveloped the region for a few frigid weeks, some Bourbon fans worried about those poor barrels silently shivering on the racks in their nippy warehouses.

Surely, they reckoned, the biting weather could have the potential to spoil, or at the very least disrupt, the aging process that renders an initially clear spirit into a mature Bourbon in a few years (or perhaps decades, with a few labels).

Not quite, says Four Roses master distiller Jim Rutledge. In the nearly 50 years that he’s worked in the Bourbon industry, he hasn’t seen any adverse weather­related effects on his barrels, and, though it might be hard to comprehend as people are still trying to shuck off the frost bite, he’s seen colder winters through the years. (Rutledge says that during this past winter, we actually experienced the 18th coldest January since weather data has been compiled.)

For one thing, he says, Bourbon is the barrel for more than one winter, so any outlying season would be compensated for over the course the spirit’s barrel life.

“For our youngest label, Four Roses Yellow Label, we average about six and half years age on that – that’s the youngest we put in the bottle. So during the aging process over that long period of time, an extreme season now and then is not going to have a negative impact,” he said.

In fact, Rutledge says extreme seasons are good for the aging spirits. When the barrels are warmed during the summer heat, the wood, American white oak, expands and absorbs a portion of the Bourbon. As the barrels cool during the cold winter months, the wood constricts and squeezes the Bourbon out, where a larger percentage of the Bourbon is in contact with the barrel’s charred insides, which generates the natural amber color.

Rutledge says Four Roses’ barrel warehouses in Lawrenceburg, Ky., aren’t airtight and they aren’t climate controlled, and that’s the way they want them.

“It’s part of the reason Bourbon does so well in Kentucky, because we have the changing seasons – we have very cold winters at times, very warm summers, and we have about as many cold days as hot days. That’s part of Mother Nature, and as far as I’m concerned, nothing works any better than Mother Nature,” he said.

The only weather­related aspect that could buckle the aging process in Kentucky, Rutledge says, would be something prolonged and permanent, like global warming, which could diminish the drastic temperature swings barrels experience while sitting in Kentucky warehouses.

“It’s not going to happen any time soon, but if we don’t have those changes and it’s always hot here, that’s one thing that could have an impact, and then we would have to adjust and go to climate­controlled warehouses,” he said.