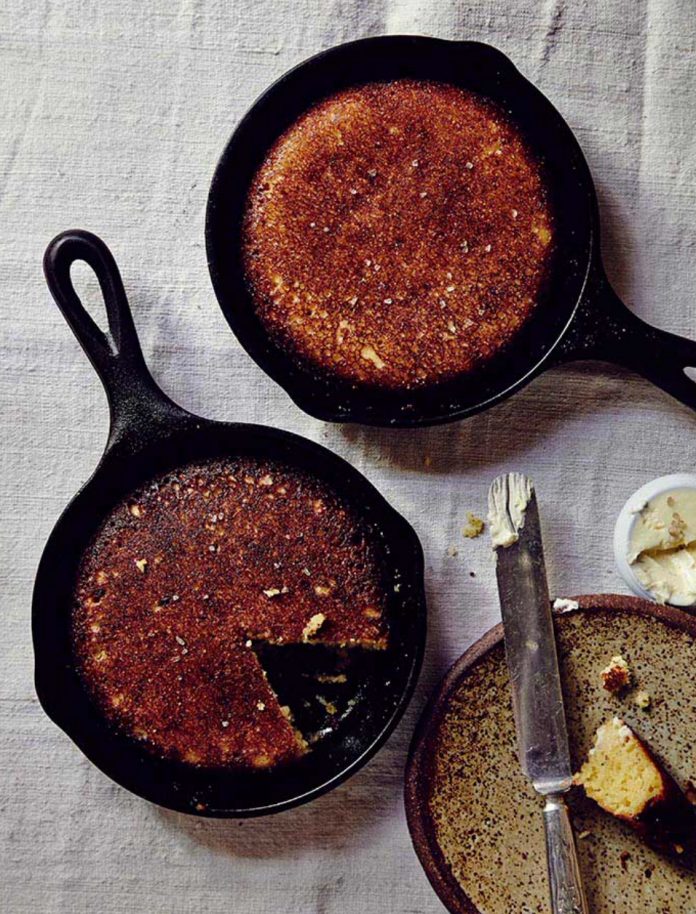 Reprinted from Heritage
By Sean Brock

My favorite ball cap, made by Billy Reid, has a patch on the front that reads “Make Cornbread, Not War.” I’m drawn to it because Cornbread is a sacred thing in the South, almost a way of life. But cornbread, like barbeque, can be the subject of great debate among Southerners. Flour or no flour? Sugar or no sugar? Is there an egg involved? All are legitimate questions.

When we opened Husk, I knew that we had to serve cornbread. I also knew that there is a lot of bad cornbread out there in the restaurant world, usually cooked before service and reheated, or held in a warming drawer. I won’t touch that stuff because, yes, I am a cornbread snob. My cornbread has no flour and no sugar. It has the tang of good buttermilk and a little smoke from Allan Benton’s smokehouse bacon. You’ve got to cook the cornbread just before you want to eat it, in a black skillet, with plenty of smoking-hot grease. That is the secret to a golden, crunchy exterior. Use very high heat, so hot that the batter screeches as it hits the pan. It’s a deceptively simple process, but practice makes perfect, which may be why many Southerners make cornbread every single day.

Makes one 9 inch Round Loaf

Put a 9-inch cast-iron skillet in the oven to preheat for at least 10 minutes.

Run the bacon through a meat grinder or very finely mince it.

Put the bacon in a skillet large enough to hold it in one layer and cook over medium-low heat, stirring frequently so that it doesn’t burn, until the fat is rendered and the bits of bacon are crispy, 4 to 5 minutes.

Remove the bits of bacon to a paper towel to drain, reserving the fat. You need 5 tablespoons bacon fat for this recipe.

Combine the cornmeal, salt, baking soda, baking powder and bits of bacon in a medium bowl.

Reserve 1 tablespoon of the bacon fat and combine the remaining 4 tablespoons fat, the buttermilk and egg in a small bowl.

Move the skillet from the oven to the stove, placing it over high heat.

Add the reserved tablespoon of bacon fat and swirl to coat the skillet.

Pour in the batter, distributing it evenly. It should sizzle.

Bake the cornbread for about 20 minutes, until a toothpick inserted in the center comes out clean. Serve warm from the skillet.