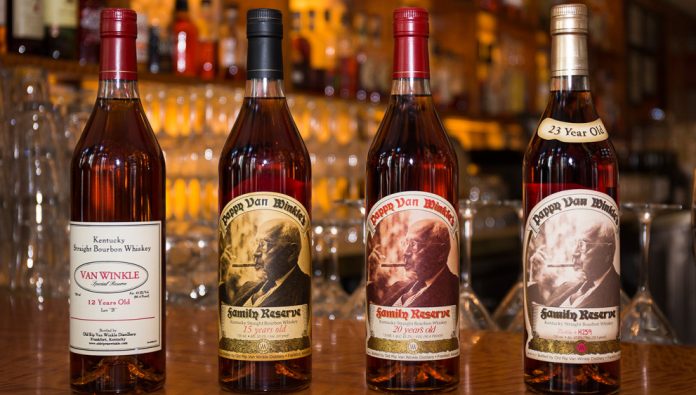 On the heels of a heist and a counterfeiting conviction, Buffalo Trace and the Van Winkle family want Bourbon drinkers to know how to make sure they’re buying genuine Pappy.

Pappy Van Winkle Bourbon is known for being hard to find – so hard, in fact, that it’s been compared to a unicorn. With most missing their chance to snag a bottle on the annual release date, crooks have taken to online secondary markets to hawk counterfeit, knock off bottles. The Van Winkles, along with partners Buffalo Trace Distillery, have recently taken action against this kind of counterfeiting, resulting in a New York man pleading guilty for his sale of counterfeit Pappy Van Winkle Bourbon. Two of these bottles sold for $1,500 last year, and the defendant will be sentenced in January 2018.

Although this case is the first successful prosecution for counterfeit Van Winkle Bourbon to date, other cases are under investigation. Buffalo Trace Distillery has spent over a half million dollars in the past year alone to curb online marketplaces selling potentially fake bottles. With the annual release of the much anticipated Van Winkle Bourbons coming up soon, Buffalo Trace is taking this opportunity to remind consumers to only buy Van Winkle Bourbons from licensed retailers.

“Avoid buying any Bourbon or whiskey, especially the highly sought after ones, from anyone in the secondary market, which includes online private sellers, or in these social media groups that claim to offer genuine products,” said Mark Brown, president and chief executive officer, Buffalo Trace Distillery. “The only legal and reputable source you should be buying from is a licensed retailer.”

Scam artists have been known to operate in a variety of ways, some of which include taking empty Van Winkle bottles and refilling them with cheaper Bourbons or mixtures of products only known to the deceiver. Con artists can also take the more technologically sophisticated route of printing counterfeit labels.

“It’s disheartening to see this happening and to see innocent consumers being swindled,” said Julian Van Winkle, president, Old Rip Van Winkle Distillery. “We cannot stress enough to be careful, and do not buy your Van Winkle products on the secondary market.  The old adage of if seems too good to be true, it probably is, definitely applies here.”

Van Winkle cautions that if you see a bottle that does not have a matching face label with a capsule on top with the proper corresponding color, that’s a sure sign of fraud. Any consumers that run across suspicious looking bottles or may have purchased a bottle from a source other than a liquor store are urged to call their local law enforcement, their state’s Attorney General, or their state Alcohol and Beverage Control Board.