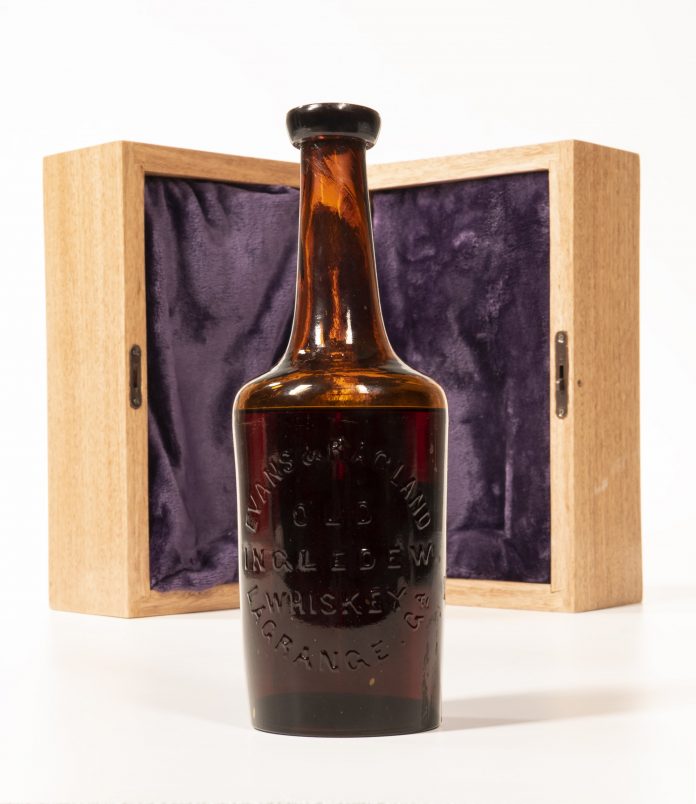 Want to own the oldest believed bottle of Bourbon (by release year, not barrel age) in the world? You’ll soon have your chance as this extremely rare piece of whiskey history will be up for grabs, June 22 – 30, via Skinner Auctioneers.

The label, Old Ingledew Whiskey, was bottled by Evans and Ragland in Lagrange, GA in the 1860’s as the Bourbon itself is believed to have been made in the late 1700’s.

It was standard practice back then to store spirits in large glass demijohns (narrow neck, large base bottle with interwoven casing) after being aged in oak barrels.

The Ingledew bottle design is consistent with glass manufacturing of the 1840 – 1870’s, per Skinner.

BACKSTORY: Who Owned it Prior?

Per Skinner fine and rare spirits expert, Joseph Hyman, the bottle is reported to have been purchased by financier John Pierpont Morgan (yeah, that J.P. Morgan) during one of his frequent visits to Georgia. It is believed his son, Jack Morgan, later gifted this bottle to James Byrnes of South Carolina and two sister bottles to Franklin D. Roosevelt (a distant cousin to Morgan) and Harry S. Truman, circa 1942-1944.

Mr. Byrnes had been US Congressman, US Senator, and Supreme Court Justice before WWII. When the USA entered the war in 1942, Byrnes resigned from the court at the behest of his good friend, President Franklin D. Roosevelt, to become Director of War Mobilization.

Upon Roosevelt’s death in 1945, he was appointed Secretary of State by his other good friend, Harry S. Truman. After leaving the Cabinet in 1947, Byrnes moved back to South Carolina and ran for governor, for which he served from 1951-55. After leaving office, Byrnes gifted the bottle to close friend and neighbor Francis Drake. Drake and his descendants, being exclusively Scotch drinkers (rubbish!), safeguarded the bottle for three generations.

Skinner is the only major auction house in New England to offer fine wines and rare spirits at auction. By hosting five auctions a year in conjunction with their retail partner, Lower Falls Wine Company, Skinner breaks new ground annually and continues to achieve highly competitive prices. With the department now in its second decade, Skinner welcomed the Rare Spirits division in 2014 adding another layer of expertise to our dynamic team. Skinner’s unique and agile approach enables them to capitalize on value for our consignors by presenting the finest cellars to the most serious collectors around the world.

Specialist Joseph Hyman brings his expertise and passion to the task of sourcing fine spirits from around the world, including a case of Pre-Prohibition Old Oscar Pepper (distilled 1911, bottled 1917) that sold for $19,680 and a bottle of 1972 Macallan in Lalique, which sold for $110,085.

Hyman came to Skinner with over 15 years of experience as a whiskey consultant, including more than two years as head of Whiskey & Rare Spirits at Bonhams New York. A leading authority in the field, he has curated a number of successful auctions featuring a variety of superior offerings, from unusual American bourbons, to notable decades-old scotches, rare Cuban rums, Cognacs dating back to the 1700s, and exotic gins. Joseph’s diverse background also includes several years as an investment analyst and portfolio manager, lending a unique perspective to his work at Skinner.