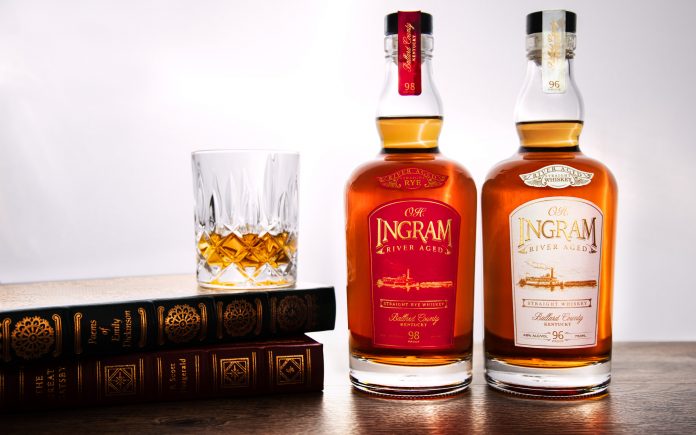 NASHVILLE based Brown Water Spirits LLC, the maker of the O.H. Ingram River Aged Whiskey Series, recently announced that its Straight Whiskey is now available to consumers in markets across Kentucky. The brand’s inaugural launch was October 2020 in the TN market.

The O.H. Ingram River Aged Series is the only whiskey aged inside a first-of-its-kind floating rickhouse moored on the riverbank in Ballard County, KY. The first expression in the Ingram River Aged Series, Ingram River Aged Straight Whiskey, formally launched in October of 2020. The reason the label doesn’t say “Bourbon” is, well, it’s not, technically. It is a combination of two whiskeys with two different mash bills. The first is a Rye whiskey 95% rye, 5% malted barley whiskey mash bill. The other whiskey is a Bourbon with 60% corn, 36% rye and 4% malted barley mash bill.

“Kentucky holds a special place in my heart. I’ve long had a deep, personal connection to the state, and the fact that we age our whiskey right here in Ballard County is a major part of that,” said founder and proprietor Hank Ingram. “We all know what Kentucky means to whiskey, and I’m proud to be able to stand next to our peers in the state now. I’m confident Kentucky whiskey drinkers will come to know and love our unique story and spirit just like their counterparts in Tennessee have.”

What makes O.H. Ingram unique is its maturation process – a first of its kind in modern times according to Ingram Whiskey. By aging the whiskey on the water, they are able to leverage the dramatic rise and fall of the Mighty Mississippi River. The constant motion of the river ensures that the whiskey never stops working. You can see the impact of the river-aging process here.

“We aren’t speeding up the aging process, our whiskey just works harder,” continued Ingram. “Ingram River Aged is the result of blending entrepreneurship and innovation with tradition. While all whiskies are products of the environment, only ours is ‘Mellowed on the Mississippi.’”

Hank is the latest in his family to take a great idea to the water. More than 150 years ago, his family began its American success story with two things — oak trees and a rushing river. Now, Hank is adding his chapter to this story by bringing together whiskey and the magic of the river to create O.H. Ingram River Aged Whiskey.

Ingram River Aged is available in retail package stores and on premise locations across Kentucky thanks to its partnership with Heidelberg Distributing, a family owned and operated company that markets and delivers beer, wine, spirits and non-alcohol beverages to retailers in Ohio and Kentucky.

“We’re excited about O.H. Ingram River Aged Whiskey and the early feedback we’ve heard from the market has been extraordinary,” said Joshua Mulberry, General Sales Manager for Heidelberg Distributing. “If there were ever a market that would appreciate the unique combination of tradition and innovation this whiskey has to offer, it’s Kentucky whiskey and bourbon connoisseurs.”

Brown Water Spirits LLC was founded in 2015 and is headquartered in Nashville, TN. With whiskey aging operations in Ballard County, Kentucky, Brown Water Spirits pioneered the first patent-pending floating rickhouse on the Mississippi River. The result is the O.H. Ingram River Aged Series.