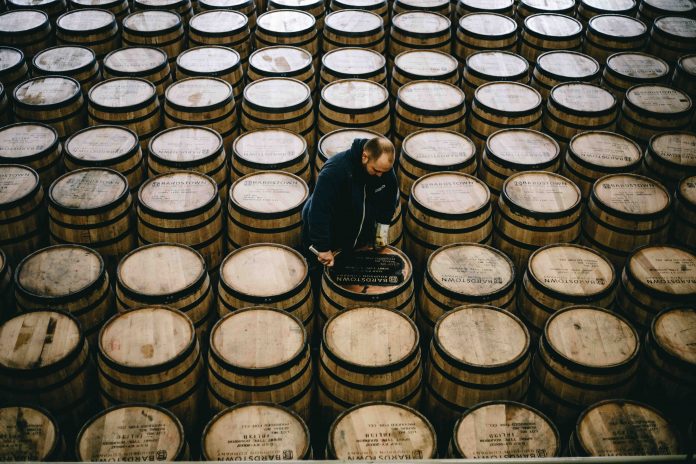 In October, the Kentucky Distillers’ Association released record numbers for whiskey barrels filled (2.1 million) and total barrels in aging (9.86 million) at the end of 2019. Cooperages raising those casks are hammering and charring round the clock, massive rickhouses needed to hold them all are rising rapidly, and distilleries are running 24-7.

Not really, if you ask distillery owners. The liquid in at least half those barrels won’t mature to sale-readiness for years, and of the roughly 15 percent that could be dumped tomorrow, the resulting bottles filled would do little to quench the world’s thirst for American whiskey.

Distillery owners describe progress toward meeting product demand as comparable to driving up an icy hill with the accelerator floored. No matter how frantically they convert grain into alcohol, its transformation into delicious brown liquor takes years that can’t be hastened.

Yet despite that reality, some American whiskey fans cast a wary eye on the image of so many resting barrels. Skeptics point to U.S. whiskey busts of the 1950s and 1970s with concern that so much liquid on hand could create a glut if …

These tender hearts—whose opinions are common to social media—want no harm to come to the makers of their beloved brands.

Others also fond of social media musing have different hopes, such as a whiskey glut that would create fire sale prices for coveted brands. They fantasize idle inventory triggering price deflation that makes American whiskey more affordable. Not only would legal whiskey buying get cheaper, they dream of sky-high secondary market values crumbling beneath such price pressures.

Industry analysts and distillers say the former groups’ concerns are as misplaced as the latter group’s aspirations. The complicated market forces that caused two bourbon busts in the 20th Century simply don’t exist in the 21st. American whiskey is on a rocket ride with fuel tanks so full that throttling back isn’t discussed. “How do we make more?” isn’t just the question of the day, it’s the question of every hour of every day as whiskey plants strive to maximize yield and squeeze the last drop of product from every distillation run.

“If anything, we’re concerned about a lack of supply,” said Susan Wahl, vice president of American Whiskey at Heaven Hill, whose Bernheim distillery churns out 1,300 barrels daily. “We’re very bullish overall … and we don’t anticipate a slowdown as of yet. We’re certainly not seeing a slowdown in consumers’ love of American whiskey in general.”

“I haven’t seen any evidence of an impending glut,” said Cowdery, a freelance writer and author of “Bourbon Straight.” “In fact, if I see anything, it’s shortages in key brands and key segments. There’s certainly no glut of well-aged bourbon out there.”

Fear of a glut “absolutely is nonsense,” said Swartz, editor at Beverage Dynamics. “We’re in the middle of another golden era for whiskey sales, and we’re still in the early innings.

“Retailers and consumers alike wish there were a much great supply of whiskey available for purchase, so any glut is really just the market catching up to demand.”

“While there is always some concern about forecasting demand a decade or more into the future, the level of premiumization and/or trading up occurring now in U.S. whiskey, compared to the 1970s-1990s, is significantly higher,” Rogers wrote in an email. “Because of this consumer-driven approach to bourbon, rye, U.S. single-malts and other blended whiskies, the overall category is diversifying at an historical rate. The plethora of options entering the market will keep consumers engaged well into the future with little worry of another supply glut.”

Two glut-driven American whiskey busts occurred in the 20th Century: during the 1950s, and again from the early 1970s through the late 1990s.

The first bust was caused by the onset of the Korean War, which ran from 1950 to 1953. In WWI and WWII, the federal government ordered beverage alcohol distillers to convert production to industrial alcohol useful to the war effort. As war in Korea seemed imminent and distillers anticipated the switch to industrial alcohol, Schenley Industries, then the nation’s largest distilling company, ramped up beverage alcohol production to record levels to ensure plenty of aging whiskey would be available.

“But when the war was less cataclysmic than predicted, they left with huge surpluses of whiskey,” said Reid Mitenbuler, author of, “Bourbon Empire.”

Despite American whiskey’s popularity during the period, supply still dwarfed demand. Worse, taxes were coming due on all that aging product. Eyeing the looming financial disaster, Schenley owner Lewis Rosenstiel formed The Bourbon Institute to lobby legislators to change the taxation period on all spirits from eight years to 20. The Forand Act, as it was called, passed in 1958 and provided distillers much needed wiggle room.

“But while that extension helped, distillers, and especially Schenley, had a lot of whiskey to sell,” Mitenbuler said. Awash in maturate, Schenley flooded the market with low-priced whiskey and drove down profits industry-wide. “Rosenstiel worked hard to sell that excess supply internationally, but the world was full of Scotch drinkers then.”

The cause of whiskey bust No. 2 was shifting consumer interests toward gin, vodka, tequila and wine in the late 1960s.

“The floor fell out of bourbon when young people didn’t think it was a cool drink anymore,” Mitenbuler said. “And again, there was a lot of supply.”

Demand crashed and some of the country’s greatest distilleries disappeared. Their brands were parceled out or abandoned altogether, and their facilities were razed or purchased by bargain hunting competitors.

The good news is that none of those market fundamentals are at play in 2020, though there are other challenges. Tariffs on U.S. spirits sold to the European Union have cost distilleries near $400 million since 2018, and the COVID-19 pandemic has slowed growth in international markets.

“The tariffs are a concern, but we continue to remain hopeful that this will be worked out,” said KDA’s Gregory. “Possibly the new (Presidential) administration may have different views on trade and help end this.”

The Beast of The Boom Years

While America’s whiskey doldrums lasted nearly three decades, the long-aged stocks that no one wanted eventually helped spur the current whiskey boom. As Cowdery said, “You could buy them for practically nothing compared to now,” and that attracted enthusiasts searching for new tipples. That their eagerness to share information and tastes of their new finds happened in step with the dot.com boom was unexpected and serendipitous for American whiskey.

“Let’s face it, this is bourbon’s time,” said Gregory. “The industry has done a really good job over the past 20 years of expanding and creating a bourbon culture that we didn’t have before. That’s a huge part of it. Now there’s bourbon in cooking, bourbon tourism and bourbon magazines.”

The industry also has improved its production forecasting. Heaven Hill’s Wahl credited the company’s better grasp of data science with forecasting improvements. Yet while such tools could help all distilleries avoid the gluts of the past, she said predicting demand is always a little nerve wracking.

“Say you have a large brand like Evan Williams, and we predict 10 percent growth that becomes 11 percent,” Wahl began. “Just a 1 percent shift is dramatic when you look how it impacts the inventory you have for use in other brands.”

Cowdery said that with American spirits sales surging, brands sourcing their whiskeys from others will struggle to find distillers willing to sell excess product.

“Why do you think Michter’s built a distillery?” he said, referring to the plant opened by the brand in 2015. “Luxco was in the same situation: they couldn’t buy anything beyond what they’d contracted for. … Now you see big distilleries getting out of the bulk business because they want the capacity for their own brands.”

Old Wm. Tarr Distillery, a brand launched in Feb. 2020, buys bulk whiskey for its two-brand line, and its president, Barry Brinegar, said there are more bulk buying opportunities than some might think. He said smart brokers know where the good barrels lie and which distilleries still offer production.

“There are a lot of barrels still available, but much of what’s in them is closer to 8 years than 12,” Brinegar said, referring to 12-year-old whiskey used in its Old. Wm. Tarr Inheritance release. “There’s very little left of those twelves left.”

Cowdery predicted supplies will only get tighter if tariffs normalize, the pandemic abates in 2021 and international opportunities reopen. Meeting demand in the U.S. is nothing, he said, compared to the sales potential for U.S. whiskeys overseas.

“I can tell you this, if China and India develop as they’ve been forecast to do for two decades, no one will have made enough,” he said.