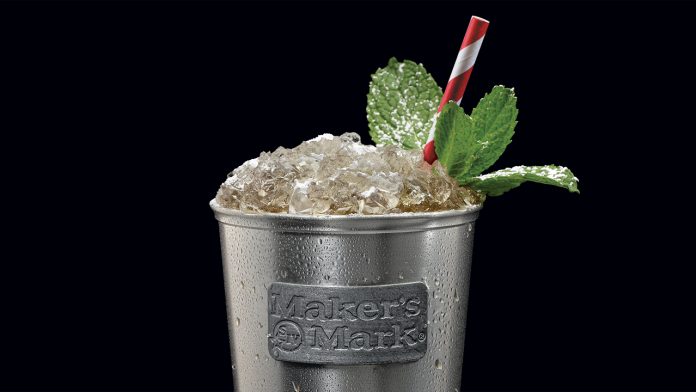 Garden & Gun, in partnership with Maker’s Mark and Bourbon Country, announces Mint Julep Month (April 5 to May 5) — a national campaign that celebrates the mint julep beyond one day of horse racing and encourages participants to ditch plastic straws in support of water sustainability efforts. Mint Julep Month was started in 2013 by the Louisville Convention and Visitors Bureau to encourage excitement throughout the city and along the Urban Bourbon Trail leading up to Derby season.

This year’s campaign festivities kick off on Sunday, April 8, with an invitation-only Julep Brunch at the Gramercy Park Hotel in New York City featuring original twists on the mint julep cocktail created by four celebrated bartenders and continues throughout the month with hundreds of participating bars, restaurants, and other establishments across the country. Go to mintjulepmonth.com for participants.

“Kentucky’s love of the famous bourbon cocktail began in the late 1700s as a refreshing morning drink or medical remedy,” said Stacey Yates, vice president of marketing communications, Louisville Convention & Visitors Bureau. “Today, the mint julep is synonymous with Louisville and the entire horseracing season, and we are excited to celebrate the Bourbon Country legacy with a national audience thanks to our partnership with Garden & Gun and Maker’s Mark.”

The mint julep has become one of America’s most iconic cocktails. The straw, invented specifically for use in sipping the mint julep, is every bit as iconic. Unfortunately, the paper straws of the 1800s have evolved into the modern plastic straws that contribute heavily to environmental pollution.

“You can’t make great bourbon without clean water, which is why we have always been so passionate about water conservation and sustainability at Maker’s Mark,” says 8th Generation Whisky Maker and Maker’s Mark COO, Rob Samuels. “In addition to preserving our natural spring-fed lake and creating a natural water sanctuary at our distillery, we’re excited to do our part in keeping water clean beyond our own grounds during Mint Julep Month. You can’t beat a great cocktail in support of a great cause.”

On Sunday, April 8, accomplished Southern-based bartenders will kick off Mint Julep Month with a Julep Brunch, on the rooftop terrace of the Gramercy Park Hotel in New York City. Featured bartenders have crafted original cocktail recipes inspired by the traditional julep to be served alongside a Southern-inspired brunch menu during the party.

Mint Julep Month will cap off on Saturday, May 5, with the ultimate Kentucky Derby viewing party on the rooftop of The Dewberry hotel, in Charleston, South Carolina.

Mint Julep Month takes place from April 5 to May 5, visit mintjulepmonth.com to find out how to take part. the site allows you to register your business as a partner and search for participating bars and restaurants in your city. It also offers a list of julep recipes to make at home and share on social media and provides information about the paper straw movement.