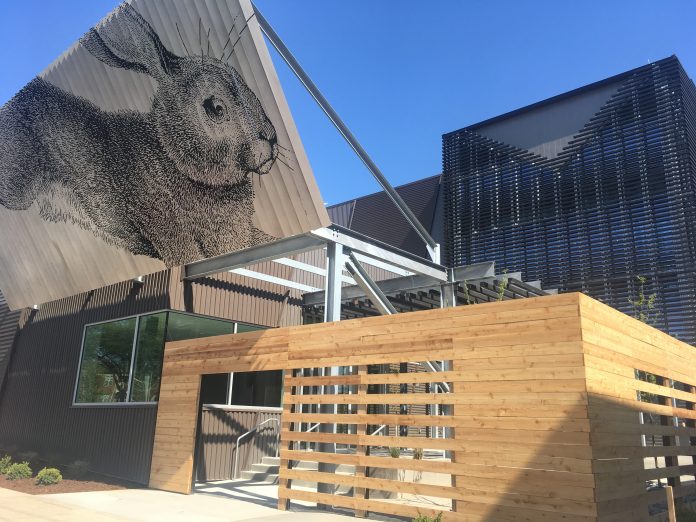 Story and Photos by Sara Havens

When you have the world’s attention, why not make the most of it? That was the thinking behind Rabbit Hole Distilling‘s decision to finish up its $15 million, 55,000-square-foot distillery and open its doors in time for this year’s Kentucky Derby.

On Tuesday, May 1, Rabbit Hole founder Kaveh Zamanian and his team held an official ribbon-cutting ceremony with city officials, media and industry cohorts, giving attendees the first tour of the modern distillery. And on Saturday, May 5, Rabbit Hole will host its first Derby Party, complete with celebrities, hats, horsemen, and Bourbon – all sponsored by Porsche.

For Zamanian, who first announced the project three years ago, it’s been a long time coming. Since then, he’s built up his staff and hired architect Doug V. Pierson for the project — all the while releasing three whiskeys Rabbit Hole master distiller Cameron Talley created at a northern Kentucky distillery.

“Rabbit Hole Distillery is one-of-kind,” Zamanian told The Bourbon Review. “It is an architectural and engineering marvel, there is nothing like it — not only in Kentucky, but in the U.S. We are different in every way, but most notably, it is our immersive experience where the manufacturing and hospitality comes together in one place, exciting the senses, elevating the experience and entertaining our visitors.”

The distillery’s open floor plan lets visitors experience an operating facility from all angles. Transparency was important to Zamanian, and the building was designed with that in mind. Windows and glass walls let guests see every aspect of the distillery — from grain to glass.

The tour also is hands-on and lets visitors get up close and personal with mash tanks, the still (if it’s not in use), barrel filling, grain storage, and much more. A wide staircase ushers visitors up the many levels, eventually reaching The Overlook, one of Zamanian’s favorite features.

“The Overlook, our tasting and hospitality space, perched above the manufacturing atrium, with views the entire city, is most spectacular,” he said. 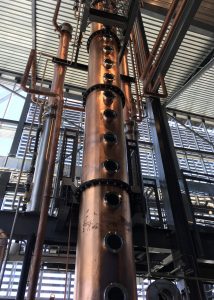 The Vendome-made still stands at 48 feet high and 24 inches wide, and distilling will begin very soon. In fact, after Saturday’s Derby Party, Rabbit Hole will shut things down for a few weeks to tie up some loose ends, but will reopen in June.

Zamanian said there will be many new products coming from the distillery in the future, including a limited-edition Cask Strength Kentucky Straight Bourbon, which will be released later this year.