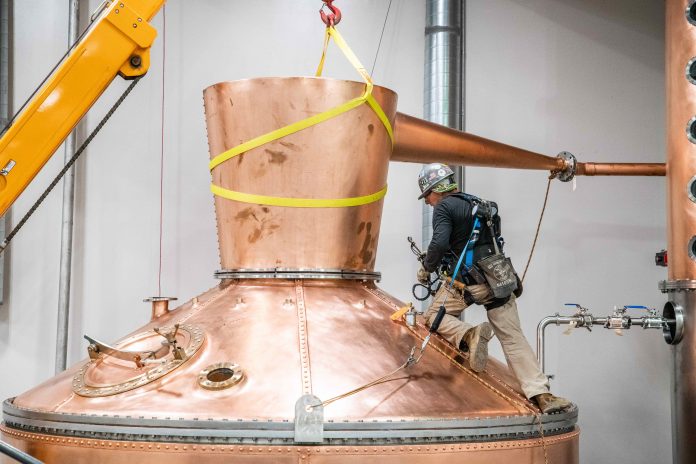 The Great Pyramids. The Great Wall. The Grand Canyon. They all have one thing in common – They’re HUGE. We humans, we’re enthralled by that which is supersized…Steaks to burritos to buildings to bridges to barrel strength whiskey – I could go on and on. We seek out the BIGGEST in any particular category, man made or mother nature. It gets you on the map. Put it this way, would Leo have been “king of the world” if Titanic was just slightly larger than an average size sea going vessel?

Now, what you came here for ladies and gentlemen – there is a new pot still king in America as this prestigious title belongs to Sugarlands Distillery Company. Founded in 2014 in Gatlinburg, TN, SDC jumped into the booze game making flavored moonshine for the masses, and I mean masses folks. Say what you will about making shine, but SDC reports receiving over 1,000,000 distillery visits a year. To put that in perspective, any KY based distillery would sleep well getting 100,000+ visitors yearly. And take out the waiting game of Bourbon aging and also rickhouse and barrel baggage costs – if you can sell the product, it’s a pretty darn good model comparatively.

In 2016, SDC did their first release of Roaming Man Tennessee Straight Rye Whiskey. A limited run and aged 2 years, it sold out within hours. Since the initial launch, it is released twice a year . Their brand new colossus 4,500 gallon pot still, made by the iconic Louisville based Vendome Copper and Brass Co, is located at their upcoming distillery in Kodak, TN, roughly 45 minutes from Gatlinburg.

The new distillery in Kodak will host a 32,364 sq foot distillery and a 26,500 sq foot aging facility. The new digs will help SDC keep up with increased whiskey demand for the present and future.

For scale and reference, one of the more publicly recognized pot stills in America resides at Woodford Reserve in Woodford County, KY, as their low wine pot still sits at 2,500 gallon capacity.

The largest pot still globally in known history (because you never what lurks in the hollers of the south) is not in use but resides at the Old Midleton Distillery in Ireland. Built in 1825, it’s capacity, a whopping 31,618 gallons. The largest pot still in operation resides not shockingly at the New Midleton Distillery (built adjacent to OMD), with a 16,000 gallon capacity and home to the Irish swill Jameson among other Irish hooligan whiskies;)