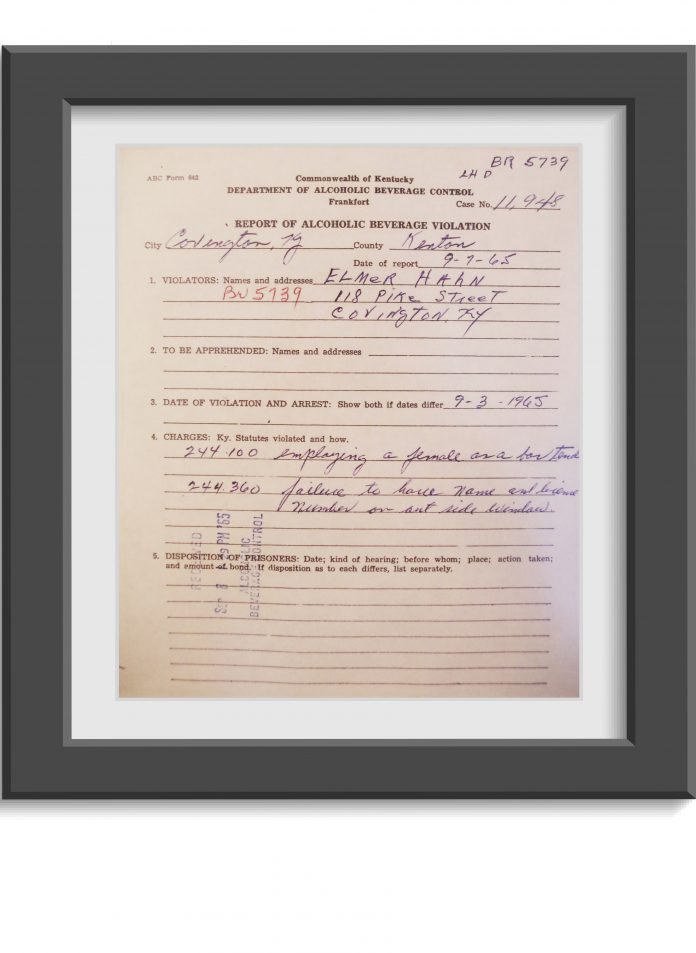 In a nondescript office building off I-64 in Frankfort, Eva Christine Trout sits at a table in her office taking notes. Trout is the first woman since the inception of the Kentucky Alcoholic Beverage Control in 1944 to hold the position of Commissioner. Trout is also joined by Distilled Spirits Administrator, Trina Summers, and the Malt Beverage Administrator, Carol Beth Martin, who are women as well, making this the first ever all-female board in the state’s history.

As a reminder of how far women in the work-force have come, Trout has hung a Kentucky ABC citation that was issued in 1965 on her office wall. One of the charges listed on the citation was to charge a liquor-serving establishment because of their decision of, “employing a female bartender.”

The citation goes on to give a detailed encounter about the lawbreakers with, “On 9-3-1965 about 6:50 PM agents Williams, Lawrence, and [illegible] visited the premises of Elmer Hahn located at 118 Pike Street, Covington Kentucky. Williams ordered two draft beers from a woman bartender and paid her the sum of 30 cents for them.”

The law was not repealed until May 12, 1972, when Dixie Burke found herself in a similar situation and decided to fight back. Burke owned a bar and had her package and drinks licenses revoked for five days for both employing a female bartender and also for allowing a woman to sit at the bar to order a drink.

According to the final ruling, Kentucky’s Civil Rights Act failed to specify sex as a protected category, but it was a moot point because women were already protected from discrimination under the Equal Rights Clause. It was, therefore, irrational to apply laws about employment and imbibing based on sex. Just like that the arcane laws were repealed.

It took decades for women to start to fill the roles previously denied to them, but today you can find female bartenders almost anywhere.

As for Trout, she started off her tenure by clearing a years-old backlog of cases together with her team, working through about two years’ worth in the first two months on the job. Her team received Governor Matt Bevin’s first ever “Red Tape Reduction Award” intended to aid Kentucky businesses in doing business by reducing 39% of the outdated regulations on the books, including laws that referred to horse-drawn carts as an acceptable method for picking up your liquor order from the train depot. Over the last year, the time it takes to get license approval from the ABC board has fallen from just under one year to an average of 17 days.

Kentucky Distillers’ Association President Eric Gregory has even praised the work of Trout’s cabinet, stating in a recent letter that, “Today’s regulatory environment is a breath of fresh air.”

From the get-go, Trout’s mission has been threefold: reach out to business owners, local government officials and anyone else who may need guidance, be transparent about the process by making everything as public as possible and be available to anyone who needs help or guidance. This has included town hall meetings on what Trout refers to as a “road show.”

Trout’s administration is also working to increase both minority and female presence in the ranks of the enforcement officers she oversees, noting that diversity would better serve the licensees, who are themselves a diverse group of people.

Everything Trout and her team are doing is designed to make guidelines more apparent and easier to follow for businesses. “We want compliant folks so the alcohol is moving and it’s moving in a safe way. There’s no question that we are pro-business. We are giving you [businesses who sell alcohol] the guard rails as the road is getting wider.”

Forty-five years after laws prohibiting women from serving as bartenders or even getting a drink at the bar, Kentucky’s first all-female ABC Board seems to be taking care of business.

And in case you were wondering, Knob Creek is Trout’s favorite Bourbon, though she admits she enjoys them all.