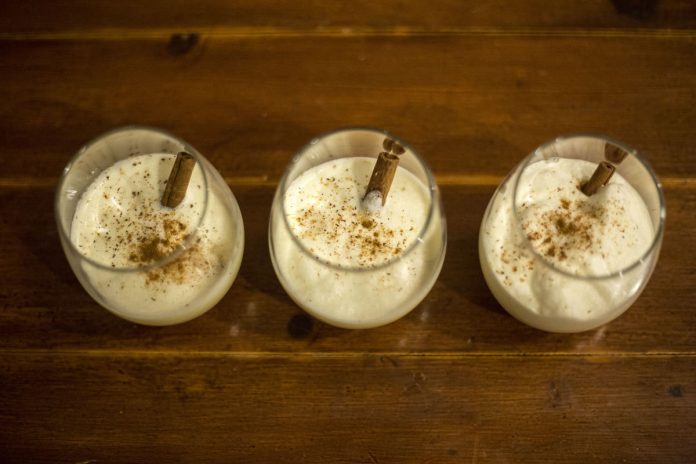 At the forefront of almost every liquor store display this time of year are bottles of packaged eggnog — ‘tis the season.

The creamy egg and milk mixture with your liquor of choice, be it bourbon, brandy or rum, is a staple at Christmas time.

What you might not know is how easy it is to make your own. All you really need is eggs, cream, milk and alcohol. Throw in some nutmeg and cinnamon for garnish and you’ve got yourself a drink. It also helps to own an electronic mixer.

You must, however, get over your fear of raw eggs, because after all it is eggnog, and those eggs aren’t getting cooked.

The recipe included is meant for a group, to be served in a punch bowl-like setting. But you could half it for a weekly personal stash.

There are also some rules with storage. If you decide to make a non-alcoholic version then you’ll need to drink up the whole batch that day. If you add the suggested amount of one and a half cups of liquor you can save it a week. The alcohol stabilizes the eggs and makes it keep longer.

2. In the bowl with the egg yolks, add sugar and beat until smooth and pale yellow. Mix in cream, milk and bourbon. Cover and refrigerate.

3. Whip the egg whites until they form stiff peaks. Fold egg whites into the yolk and dairy mixture.

4. To serve, garnish with freshly grated nutmeg and cinnamon.

5. Will last for one week refrigerated.