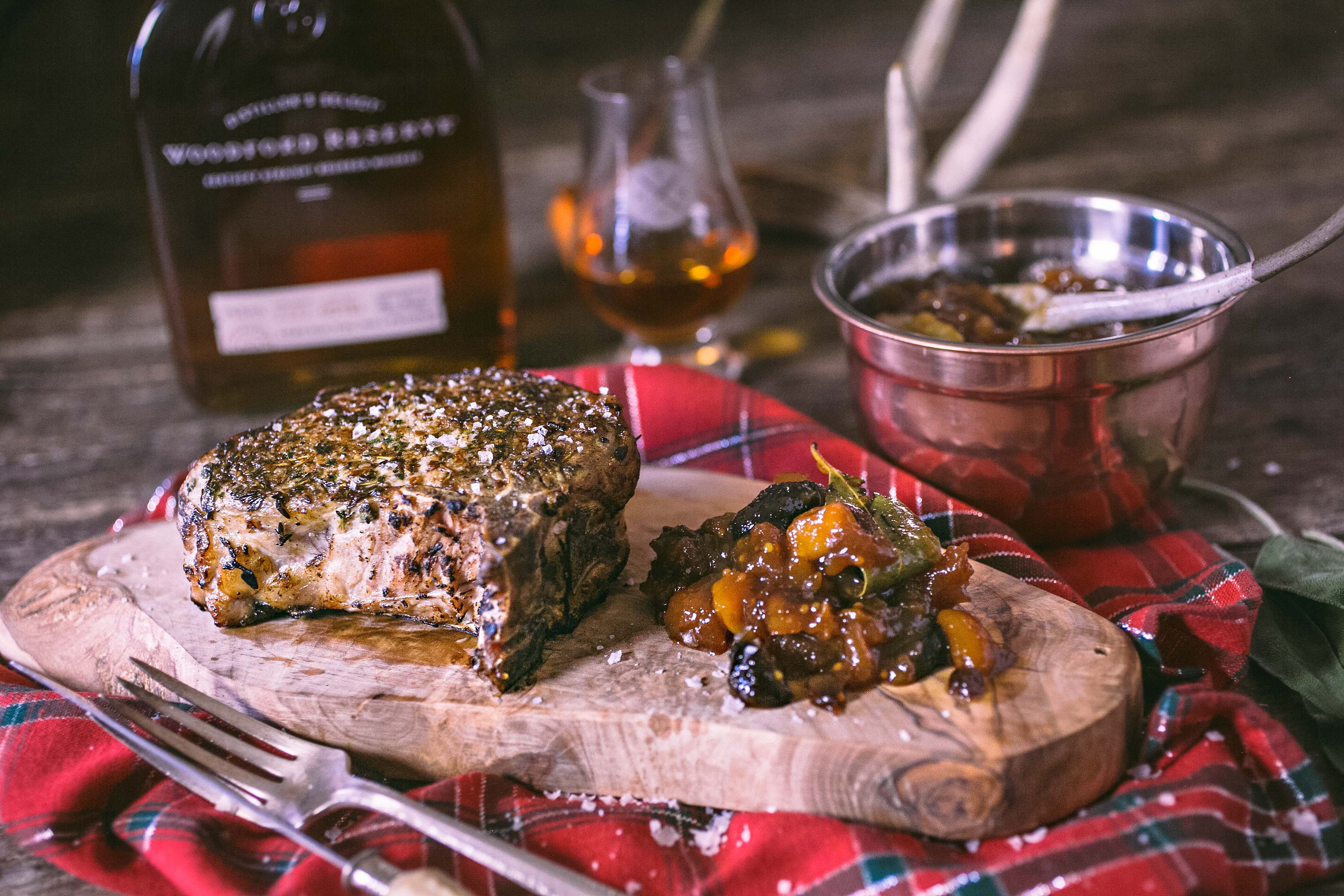 The holidays can be a hassle, so why don’t you let The Bourbon Review and Woodford Reserve help you entertain your guests with the best gift of all – Bourbon.

Bourbon is not only great in a glass by itself or as a cocktail, but is a fantastic ingredient for countless classic food recipes.  Woodford Reserve has been studying for decades how to incorporate Bourbon into food with help from award winning chefs like Ouita Michel, and have actually pinpointed 212 different flavors that your palette can pick up on.  They have even developed a flavor tasting exercise specifically designed to help your palate identify certain flavors.

The many flavors that can be extracted from Woodford Reserve’s line of whiskies are sure to compliment almost anything on the table this holiday season.  Here are a few recipe suggestions from lifestyle expert Victor Sizemore and Chef Ouita Michael to kickoff the holidays.

Duck legs (at least one per person) 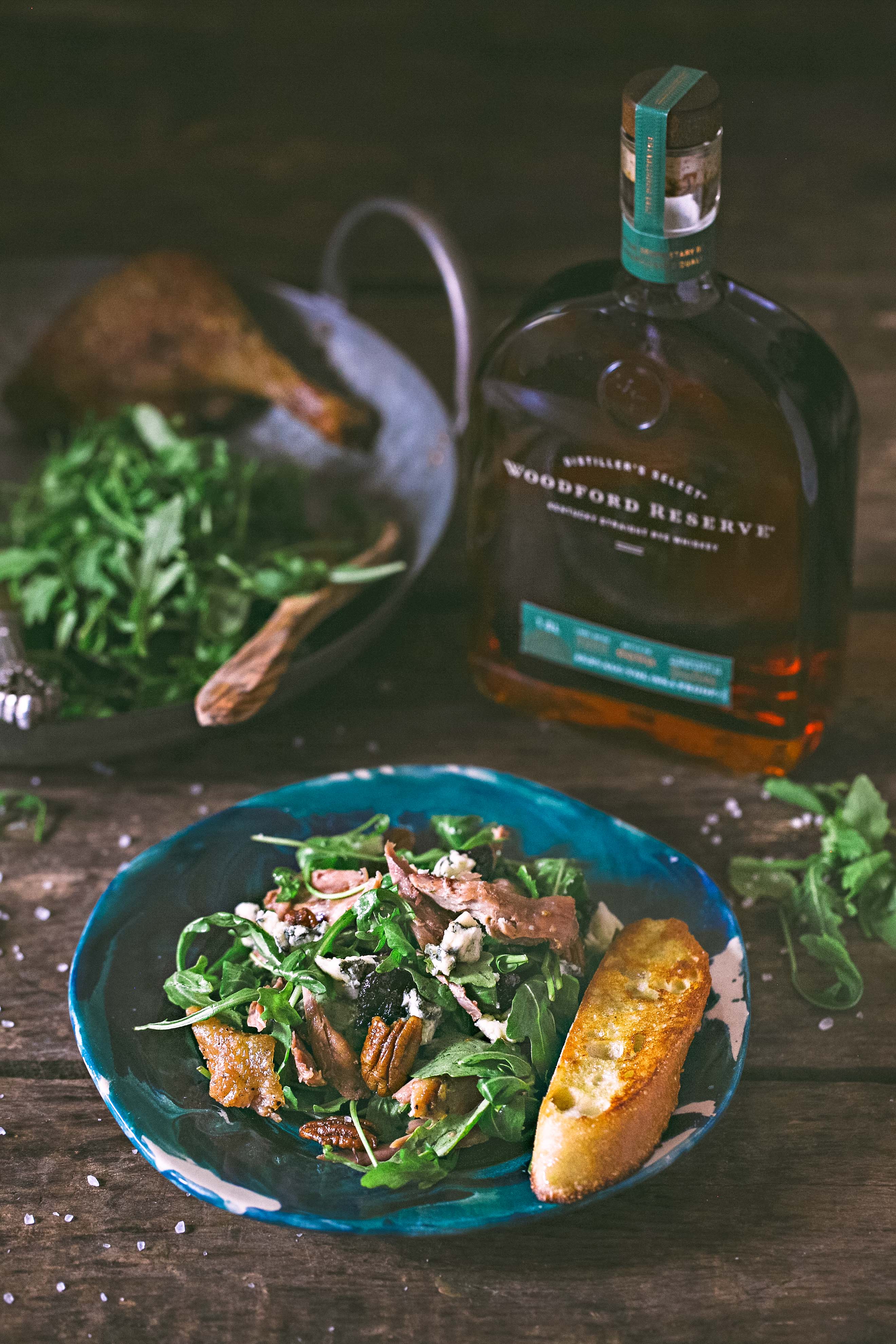 Pat the duck legs dry with paper towels. Find a needle or a very pointy knife and prick the skin of the duck all over. Focus on the skin that covers fat. Do your best to avoid piercing the meat itself by pricking the skin at an angle over the drumstick and the center of the thigh. You are doing this to give the fat that lies under the skin a place to seep out – if you don’t do this, it will be far more difficult to get crispy skin.

Salt your duck legs well, more than you think you ought to, actually. Let them rest at room temperature for at least 20 minutes and up to an hour. Don’t worry, they’ll be fine.

Put the duck legs in a small casserole, skin side up. How small? You want it just big enough to hold the legs. Put a thin sheen of oil or melted duck fat on the bottom of the casserole, then place the duck legs in close together but not overlapping.

Put the casserole in the oven and heat it to 300°F; if you have a digital oven, you could even go down to 285°F. Do not preheat the oven. You want to cook the duck as gently as possible.

Walk away and watch football, go shopping, read a book or something. How long? Every duck has a different level of fat, so I can’t tell you exactly. But it will be at least 90 minutes, and two hours is better. After 90 minutes, check the duck: It should be partly submerged in melted fat and the skin should be getting crispy.

When the skin is starting to look crispy, turn up the heat to 375°F. Check after 15 minutes. You’re looking for a light golden brown. If you missed some spots with the needle and there are places where the skin won’t crisp that’s OK—better that than burnt skin elsewhere.

Remove from the oven and let cool for 10-15 minutes before eating. Save the accumulated fat for cooking vegetables, other meats or for keeping your skin shiny. I strain the fat through cheesecloth, but you really only need to do this if you are saving the fat for several weeks or months; strained, it will keep for 6 months tightly covered in the fridge. Well wrapped, the duck meat itself will last up to 2 weeks in the fridge.

Combine the bourbon and the dried cherries in a small bowl and set aside to soak for 30 minutes. In another small bowl, combine the brown sugar, salt, black pepper, and cayenne pepper and stir until well-combined. Set aside.

Place the pecans in a large non-stick skillet over medium heat. Cook, stirring frequently, until they just start to brown and smell toasted, 3 to 4 minutes. Add the butter to the pan and stir until the butter is completely melted and the pecans are coated.

Add the sugar and spice mixture to the pan and stir to combine. Turn off the heat and immediately pour in the cherries and bourbon. Stir for 1-2 minutes more, off heat, until everything is well incorporated.

Return the pan to medium heat and continue to stir everything in the pan until the liquid thickens and a glaze forms on the pecans, 1 to 2 minutes longer. Transfer the pecans to a parchment-lined rimmed baking sheet.

Pre-heat oven to 350F. Combine all ingredients and rub both sides of the pork chops. Heat a cast-iron skillet on high heat with 1-2 tablespoons of oil. Then sear pork chops on each side until golden brown. Then transfer pan to oven for 15-20 minutes until internal temperature reaches 150F – 160F. Then let rest before serving.

Bring all ingredients and 3 cups water to a boil in a 4-qt. saucepan over medium-high heat; cook, stirring occasionally, until apricots and cherries are plumped, apples are tender, and liquid is reduced, about 40 minutes. Let cool. 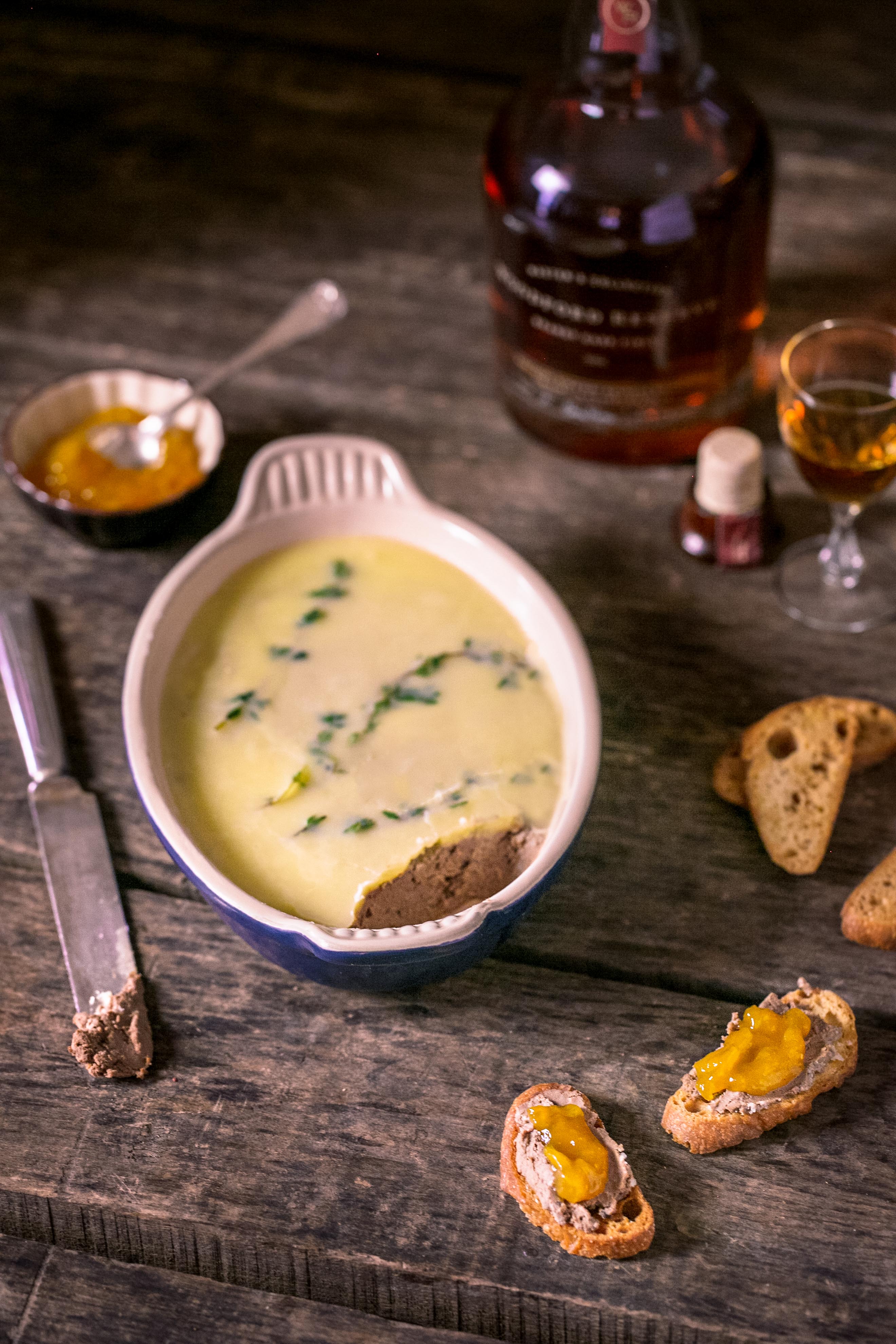 About 1/4 cup extra virgin olive oil, plus more for drizzling

Maldon or another flaky sea salt

4 thick slices crusty bread, or 2 large slices, cut in half

Pour 2 tablespoons of the olive oil into a large sauté pan and set it over high heat. When it’s hot, turn the heat down to medium and add the shallots and garlic. Cook until they’re golden brown, about a minute. Remove from heat and add the Woodford Reserve Master’s Collection Brandy Cask Finish to the pan and give it a good shake, then scrape the mixture into a small bowl and set aside.

Rinse the pan and wipe it out well with a paper towel, then set it over high heat and add 1 tablespoon of the olive oil. When the oil just begins to smoke, pat the livers dry and add them to the pan. Cook until the undersides are golden brown, 1-1/2 minutes or so. Carefully turn them over and sprinkle on about 1 teaspoon salt, then give the pan a little shake. Cook the livers just until they feel bouncy, like little balloons, about 30 seconds more. You want them slightly pink inside, not rare.

Turn off the heat and add the shallot mixture, liquid and all, to the pan.

Shake the pan, stirring and scraping it with a spoon to loosen the crispy brown bits on the bottom, then scrape the contents of the pan into a bowl. Let it all cool for a few minutes.

Drizzle about 1 tablespoon olive oil over the liver mixture and sprinkle in about a teaspoon of salt and a couple twists of black pepper. Puree with food processor or hand blender. Let it cool to room temperature.

Toast or grill the bread until crispy but still a bit soft in the middle. Drizzle the toasts with a little olive oil, spread on a generous amount of the liver mixture, top with Mango or Peach preserves. 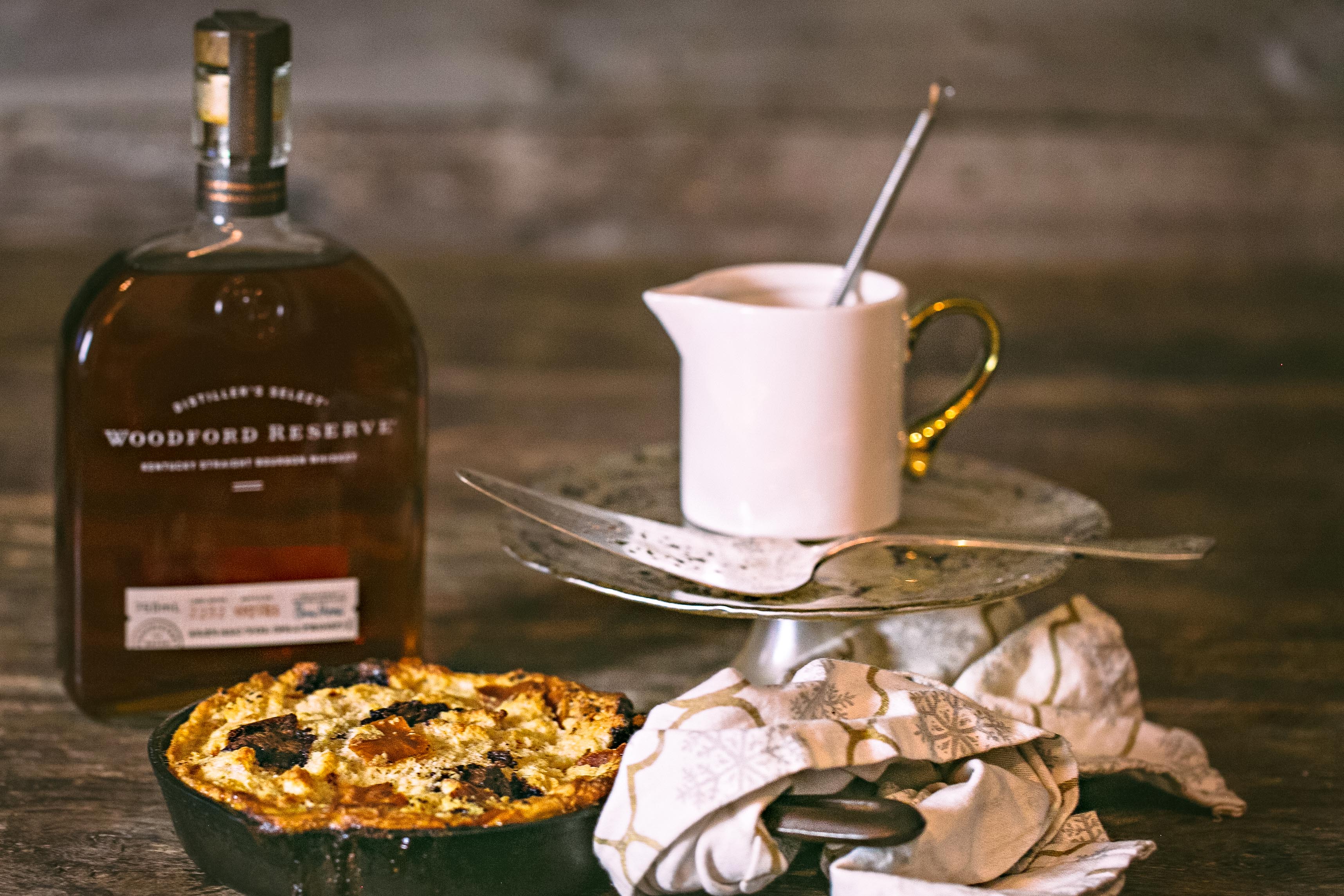 Place bread cubes in large bowl and toss with milk until bread is moistened. Soak bread in milk for at least one hour.

Preheat oven to 350 degrees. Whisk together the eggs, sugar, vanilla and cinnamon and pour over bread/milk mixture. Fold together until well mixed.

Fold in the chocolate chunks and mix until evenly distributed.

Pour into a greased deep 13×9-inch pan. Drizzle the melted butter over the pudding then cover with foil.

Bake at 350 degrees for 30 minutes covered, and 10-15 minutes uncovered until pudding is set and firm in the middle and golden brown on top. Serve warm with Bourbon Butter Sauce (see below.)

Melt butter in heavy bottomed saucepan over medium heat. Whisk in the sugar and bourbon and bring to a simmer.

Pour all liquid back into the pan and return it to medium heat. Bring to a light simmer and cook for several minutes, until thickened. Keep warm and serve over bread pudding. 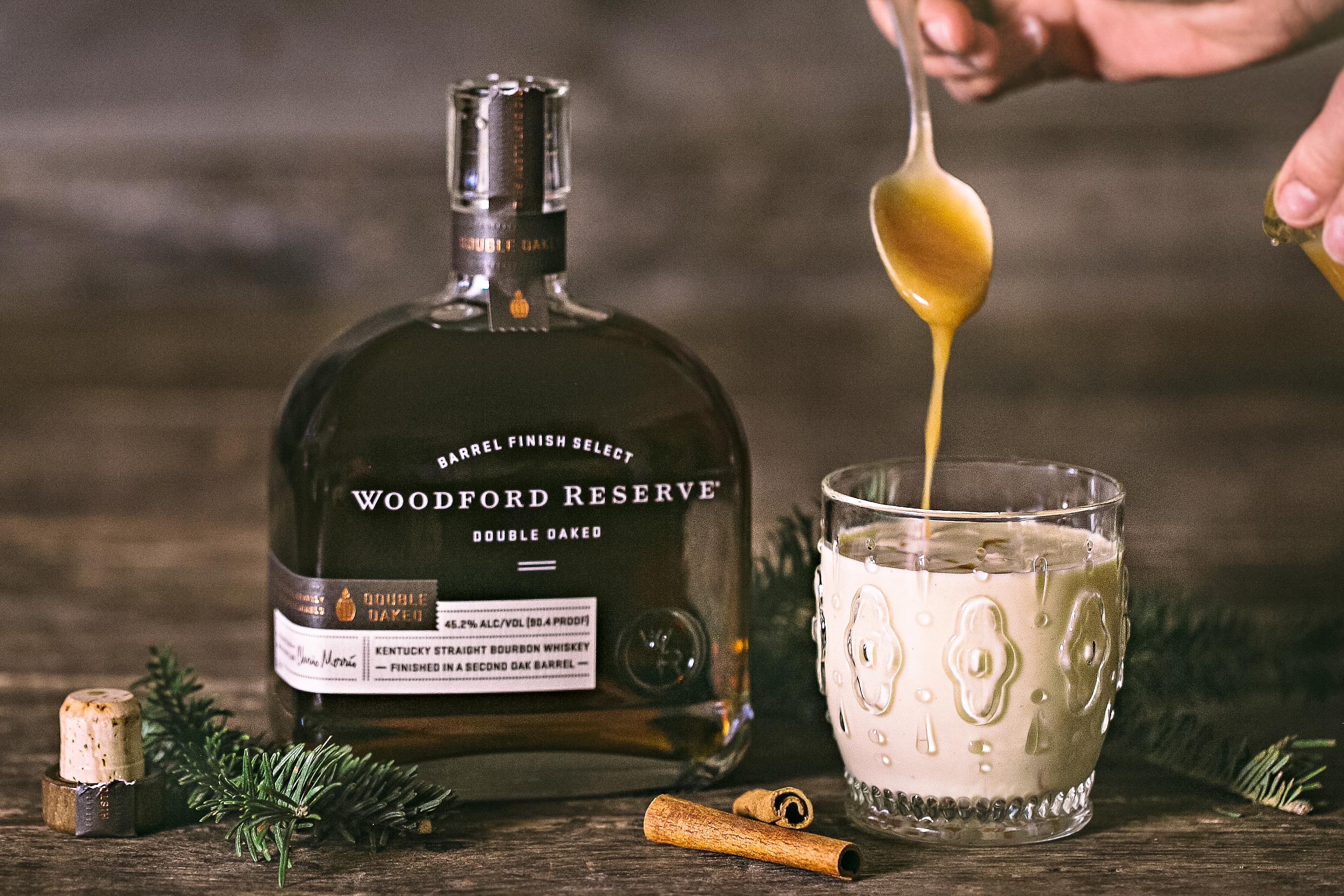 In the bowl of a stand mixer, beat the egg yolks until they lighten in color. Gradually add the 1/3 cup sugar and continue to beat until it is completely dissolved. Add the milk, cream, bourbon and nutmeg and stir to combine.

Place the egg whites in the bowl of a stand mixer and beat to soft peaks. With the mixer still running gradually add the 1 tablespoon of sugar and beat until stiff peaks form.

Whisk the egg whites into the mixture. Chill and serve.

In the bowl of a stand mixer, beat the egg yolks until they lighten in color. Gradually add the 1/3 cup sugar and continue to beat until it is completely dissolved. Set aside.

In a medium saucepan, over high heat, combine the milk, heavy cream and nutmeg and bring just to a boil, stirring occasionally. Remove from the heat and gradually temper the hot mixture into the egg and sugar mixture. Then return everything to the pot and cook until the mixture reaches 160 degrees F. Remove from the heat, stir in the bourbon, pour into a medium mixing bowl, and set in the refrigerator to chill.

In a medium mixing bowl, beat the egg whites to soft peaks. With the mixer running gradually add the 1 tablespoon of sugar and beat until stiff peaks form. Whisk the egg whites into the chilled mixture.

In a medium saucepan set over medium-high heat, combine the sugar with 1/4 cup cold water and stir to combine. Cook, without stirring, until the sugar has turned a deep amber hue, approximately 10 to 12 minutes.

Meanwhile, warm the cream in a small saucepan. When the caramel is ready, slowly whisk in the warm cream and continue simmering the mixture until it is smooth, another 2 to 3 minutes. Remove from heat, then whisk in the butter, and then the salt, to taste. Lastly, whisk 2 tablespoons of Woodford Reserve Double Oaked Bourbon.