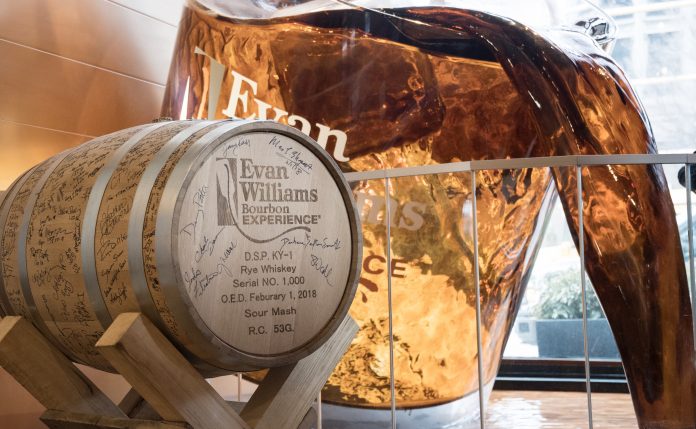 The Evan Williams Bourbon Experience, a cornerstone of Whiskey Row’s renaissance in Downtown Louisville, filled their 1,000th barrel today, February 1, 2018. The distillery reaches this milestone after producing one barrel per day since production began in September 2013, compared to the 1,300 barrels produced per day at Heaven Hill Distillery’s Bernheim Facility. The distillery, tour, and retail location celebrate the legacy of Evan Williams, Kentucky’s first distiller, and is the first official stop on the Kentucky Bourbon Trail.

Bourbon tourism continues to grow rapidly, with more than 1.4 million visitors enjoying tourism experiences across Kentucky in 2017. As the first distillery to re-open on Whiskey Row, the Evan Williams Bourbon Experience celebrates the heritage and craft of American Whiskey distilling in Louisville.

“When the Evan Williams Bourbon Experience opened in 2013, a unique, innovative experience was created where Bourbon fans, historians, and visitors alike could enjoy our nation’s spirit,” said Heaven Hill President Max L. Shapira. “We are proud to celebrate filling 1,000 barrels at our artisanal distillery with the City of Louisville and look forward to sharing product from the first barrels when they mature.” 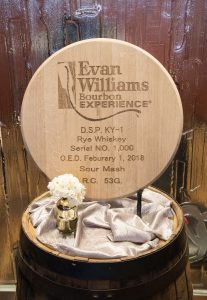 Evan Williams was not only a pioneer in Bourbon, but also a Trustee of the City of Louisville, wharfmaster, and builder of the first county clerk’s office and city jail. In honor of Williams’ heritage in Louisville and the milestone achieved by the Evan Williams Bourbon Experience, the 1,000th barrel was dedicated to the City of Louisville. The unfilled barrel was displayed in the lobbies of seven downtown partners for one day each before being transported from Mayor Greg Fischer’s office to the Evan Williams Bourbon Experience to be filled. All visitors were invited to sign the barrel on the day of the filling.

“Bourbon is a unique part of both our rich history and our bright future,” said Louisville Mayor Greg Fischer. “Distillery experiences like Evan Williams are part of what we call Bourbonism, creating a great opportunity for our city to become an even more popular tourist destination in the years ahead. And that’s more great news for our economy.”

Marked by a five-story Evan Williams Bourbon bottle on the building façade at 528 West Main Street, the facility celebrates the Louisville ‘Bourbonism’ movement. Artisanal Distiller Jodie Filiatreau operates a fully functioning, copper pot still distillery producing one barrel per day, just as Evan Williams would have in his distillery on the Ohio River more than 200 years ago.

As Heaven Hill Distillery’s flagship Bourbon brand and the second largest selling Kentucky Bourbon in the world, the legacy of Evan Williams is brought to life through the tour and experience. Guests are transported through the distillation process and history of Whiskey Row when Williams himself first built his distillery. Premium tastings of Heaven Hill Distillery’s award-winning whiskeys are also included on a variety of tours offered.

Visitors can learn more about tours and tastings here.