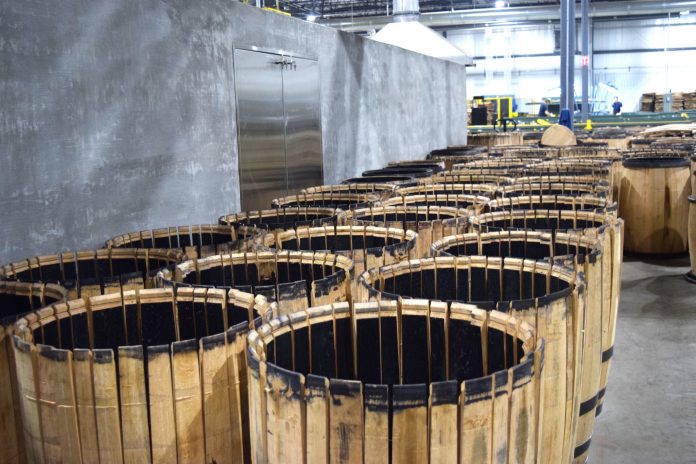 When East Bernstadt Cooperage in Laurel County began crafting Appalachian white oak barrels a quarter century ago, owner C.B. Robinson lived in a small, wood-framed house across the street from the shop.

From his living room window, Robinson could keep an eye on the cooperage and the neighboring Robinson Stave Mill, which the family also owned and had been operating for decades. Robinson walked to work seven days a week, recalls Terry Nantz, the owner’s son-in-law. On weekends, Robinson could almost always be found playing bluegrass music for his home and work families.

It was 1993, which some might’ve considered an unlucky year to open a cooperage.

Bourbon sales had dropped off significantly in recent years. It had a reputation for being “your father’s drink,” and clear spirits like vodka and gin dominated the market. Still, workers at East Bernstadt Cooperage spent years working four days a week, making roughly 250 barrels a day.

But all that changed around 2010, said Nantz, who has been managing the cooperage since 1995.

Distillers upped production of premium, small-batch bourbons. With the success of the TV show “Mad Men,” classic cocktails and impressive Bourbon selections became standard in bars across America, a phenomenon that has continued with shows like “Billions.” Bourbon sales skyrocketed – and so did the demand for new charred oak barrels, which are required by law for the production of America’s only native spirit.

One day, Nantz got a phone call asking him and his workers to double production overnight. He hired more craftsmen and increased production to five days a week, including nights.

“I got everybody in the groove,” he said. “We got everything moving and got more barrels made, put on a truck and sold them.”

It’s been non-stop ever since.

Keeping up with demand

Until recently, East Bernstadt Cooperage had one shop on the premises, the original cooperage located on the east side of Kentucky 3434. Workers there produced barrels using staves – the thin strips of oak wood that form the barrel – from the family’s mill. Though the process was partly aided by machinery, it was labor-intensive. Barrels had to be rotated by hand, and men with sledgehammers did the job now performed by the roll-out machine, which pushes the staves outward to give each barrel its round shape.

In 2016, as distillers and market forecasters became increasingly confident that the demand for Bourbon would continue to grow, East Bernstadt Cooperage decided to build an additional facility on the west side of Kentucky 3434. The new shop would allow the company to increase barrel output fourfold and further automate the barrel-making process.

So, the cooperage partnered with the London-Laurel County Industrial Development Authority, which enlisted the help of the Department for Local Government to find funding for the expansion. DLG, an arm of the Office of the Governor dedicated to supporting local officials and communities, secured $1 million in federal Community Development Block Grant funds to purchase equipment for the new shop.
The new facility opened in November and began operating at its current capacity in January. The expansion has since created more than 50 jobs.

“East Bernstadt Cooperage has a history of giving back to the community,” Department for Local Government Commissioner Sandra K. Dunahoo said. “I’m so pleased that DLG could be involved in the expansion of this family-owned business. While this expansion wouldn’t have happened without the Robinson family’s entrepreneurial spirit, we were excited to lend a hand to support job growth in Laurel and surrounding counties.”

When it comes to making Bourbon, the barrel isn’t just a vessel into which unaged whiskey – called white dog – enters and ages. As Kentucky Distillers’ Association President Eric Gregory puts it: “The barrel is where the magic happens.”

That’s a large part of the reason that East Bernstadt’s char levels are a closely guarded secret – and why distillers so closely scrutinize the barrels they use.

“They’ll actually from time to time break one completely down when it gets to the distillery to measure it all to make sure that it’s still meeting the specifications,” Lovegrove said.
And if you’ve enjoyed Bourbon at some point in the past 25 years, it’s likely you’ve consumed Bourbon aged in an East Bernstadt Cooperage barrel. The company has produced barrels for Buffalo Trace, Heaven Hill, Barton Distillers and more.

No end in sight

Of course, East Bernstadt Cooperage and Robinson Stave Mill aren’t the only companies benefitting from what has been called a “Bourbon renaissance.”

Today, Bourbon is an $8.5 billion signature industry in Kentucky, and last year, distilleries across the Commonwealth filled nearly 1.9 million barrels of Bourbon – more than any year since 1967, according to statistics from the Kentucky Distillers’ Association.

“If you’re involved with any part of the Bourbon-making process, chances are you’re expanding,” Gregory said. “And you’re probably not only expanding – you’re probably on your second or third expansion.”

But the growth of Bourbon has had an even farther-reaching effect in Kentucky.

Vendome Copper and Brass Works in Louisville, which makes the vast majority of bourbon stills across the country, is experiencing a 6- to 8-month waiting list because the demand for their product is so high. Buzick Construction in Bardstown, which builds most of the state’s Bourbon aging warehouses, has more than quadrupled its workforce in the past decade. And that’s not even to mention the entrepreneurship that has grown out of a love for America’s only native spirit.

“We have Bourbon cooking classes. We have Bourbon magazines. We have Whiskey Row revitalizing in downtown Louisville,” Gregory said. “Bourbon tourism is just through the roof. It is really helping to drive a lot of Kentucky’s economy.”
He also added: “People ask us, ‘When’s the bubble gonna burst?’ We don’t see that happening.”

Even though East Bernstadt Cooperage is prepared to continue growing, Nantz said that there are some things that won’t change with the cooperage and stave mill – even though Robinson passed away about a year before the new facility opened.

Robinson was known for providing for his employees, Nantz said. If an employee was in a tight spot financially, Robinson would give him money for lunch or medical expenses without expecting repayment. He just wanted his workers to be taken care of.

Today, the company is committed to paying employees a competitive wage and offering benefits.

No matter how big the company gets, Nantz said, “that’s part of it that won’t change.”