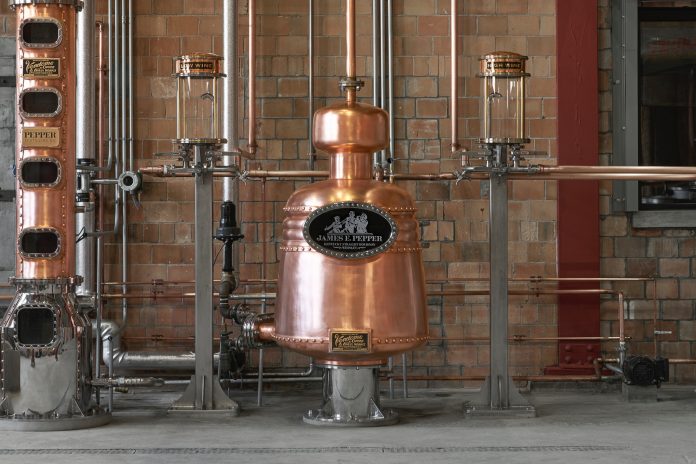 The James Pepper Distilling Co. is pleased to announce that it has fermented, distilled and barreled its first batch of bourbon whiskey at the historic James E. Pepper Distillery in Lexington, Kentucky—the first production at the distillery since it was closed in 1958.

The James Pepper Distilling Co., producer of the James E. Pepper “1776” whiskey brand, is pleased to announce that it has fermented, distilled and barreled its first batch of bourbon whiskey at the historic James E. Pepper Distillery in Lexington, Kentucky. This is the first production at the distillery since it was closed in 1958, then abandoned for over 50 years.

The project to renovate and rebuild the historic ‘Distillery No. 5’ (DSP-KY-5—the fifth distillery license ever issued in the state of Kentucky) was announced in May of 2016. The distillery utilizes the historic limestone well 200 feet below ground, and locally grown corn and rye have been harvested for production.

“This is truly an historic occasion and the culmination of a ten year effort to restore both this iconic brand and the distillery to their proper places in the annals of Kentucky whiskey,” commented Amir Peay, owner of the James Pepper Distilling Co. “The best part is that we are just getting started and are excited to distill unique, high quality whiskies and to share them with the world when the time is right. We are also very fortunate to be located in the city of Lexington, in the vibrant Distillery District, and look forward to welcoming visitors to our distillery for tours in the Spring of 2018.”

A small event was held at the distillery with Mayor Jim Gray and others from the community to commemorate the filling of the first barrel. The recipe for the first batch of whiskey distilled was the exact same recipe as last produced at the Pepper Distillery in 1958. 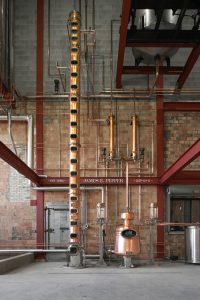 The distillery features a unique copper still system from Vendome Copper in Louisville, and its design was inspired by the archive of historic mechanical drawings from the old distillery. Vendome also made the still for the same distillery in 1934—the year Prohibition was repealed in Kentucky. Upon completion in Spring 2018, the distillery will feature a museum showcasing the life of the original founder, Colonel James E. Pepper, and a collection of historic materials assembled over a decade of research.

The Pepper family brand of whiskey was founded during the American Revolution and distilled over three family generations in Kentucky. Originally built in 1869, the Pepper Distillery in Lexington was in operation until 1958, and then was abandoned for over 50 years. Over the last several years the blighted property and surrounding area have undergone a revitalization as part of a community redevelopment and collaboration among independent local entrepreneurs. The now thriving “Distillery District” is a 25-acre entertainment district in downtown Lexington, KY, on the grounds of the historic James E. Pepper Distillery, and listed on the National Register of Historic Places. A vibrant and thriving destination, visitors can enjoy working distilleries, a brewery, restaurants, bars, gourmet ice cream, coffee, and more.