Home Food and Drinks These Chipotle BBQ and Bourbon Chicken Tacos are the Tuesday Treat You... 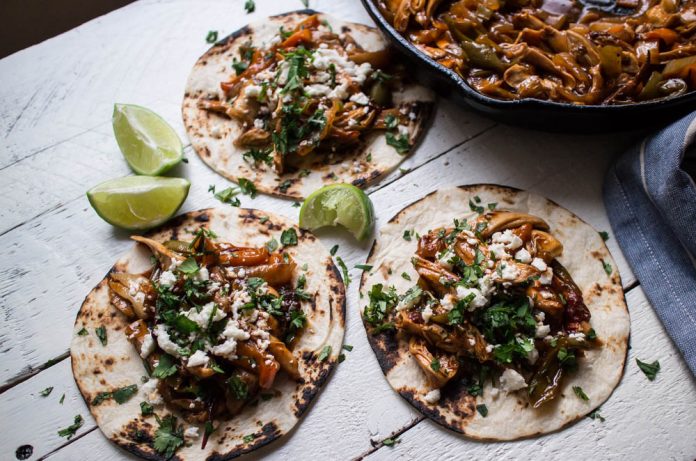 Photos and Recipe by Christine Carlson

Warmer weather is on its way! Embrace the heat with these smoky and spicy Bourbon BBQ chicken tacos. We suggest these with a juicy Bourbon cocktail – and lots of chips and queso. Click here to see the recipe in its entirety at whatdoyoucrave.com! 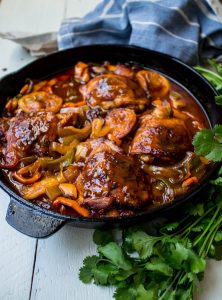 Instructions
1. Preheat oven to 350°F.
2. Cut any excess fat off the chicken thighs and pat dry with paper towels.
3. Heat oil in a cast iron or ovenproof skillet on medium high heat.
4. Season chicken with salt and pepper, paprika, and cumin.
5. Place chicken skin-side down in skillet, cooking until skin is golden, about 5 minutes.
6. Flip chicken with tongs and cook a few minutes more. Remove chicken and set aside.
7. Deglaze the pan with whiskey, scraping up any bits at the bottom of the pan with a wooden spoon.
8. Turn off the heat and add in the BBQ sauce, chipotle peppers and sauce, water, peppers, garlic, lemon slices, and onion.
9. Mix well so everything is coated before adding the chicken back to the pan.
10. Bake at 350°F for about 45 minutes, uncovered, basting with sauce occasionally.
11. Then reduce the temperature to 275°F and bake, covered, for another 45 minutes. The chicken is done when it is tender and easily falls off the bone.
12. Remove chicken, peppers, and onion from the skillet with a slotted spoon. Discard the lemon slices. Remove the bones and skin from the chicken thighs and shred with fingers or forks.
13. On the stovetop over medium heat, reduce the liquid in the skillet by half before adding the chicken and veggies back in. Stir to coat with sauce.
14. Serve with warm flour tortillas (I like to char mine on the stovetop), cilantro, queso fresco, and lime.