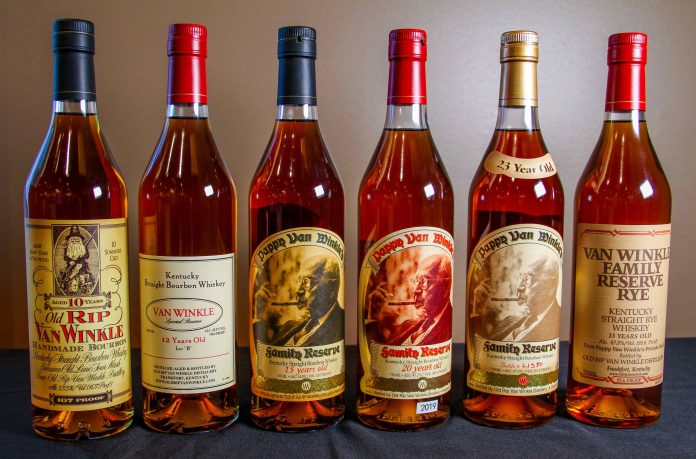 The three prized Bourbon collections are valued at over $58,000, with the grand prize consisting of an impressive six-bottle lineup of Pappy Van Winkle Bourbon.

At the heart of the raffle is three-year-old Wyatt Perdue, who is living with cystic fibrosis, a genetic disease that causes persistent lung infections and limits the ability to breathe. In 2021, his father, Nathan Perdue, approached the Kentucky Derby Museum with the idea of raffling off his prized Pappy collection, in hopes that teaming up would
bring more awareness and funding to find a cure.

By combining forces, Perdue and the Kentucky Derby Museum raised $400,000 in 2021, with the vast majority of that money going to lifesaving research.

Tickets are on sale for $100 each, with full contest details at derbymuseum.org/raffle. Only 6,000 tickets will be sold, and there is no limit on the number of tickets that may be purchased by an individual. Raffle participants must be at least 21 years old and must live in the Continental U.S. to purchase tickets.

What is Julian’s Favorite Pick of The Pappy Litter?

When Julian Van Winkle III heard about the raffle, he agreed to sign the bottles. “I like to joke that me signing them makes them less valuable, but I can understand if it’s me or my son signing the bottles that it makes them a little more special, I’m glad to do it,” he said.

“While we didn’t start out with charity in mind,” said Van Winkle, “I feel really blessed
that organizations all over the country can auction these whiskey bottles off and can
raise a tremendous amount of money, it makes it all just great.”

As far as his favorite bottle in the Kentucky Derby Museum lineup, Van Winkle says it’s
the 15-year.

“It’s got more intensity, a lot more flavor than the younger ones, and it’s not as oaky and maybe as much of the woodiness as the older ones have, which are more sippin’ whiskeys, which this one you can drink with some ice with a twist of lemon, or in a cocktail – yes – in a cocktail! Don’t be shy to put good whiskey in a cocktail.” – Julian VW III