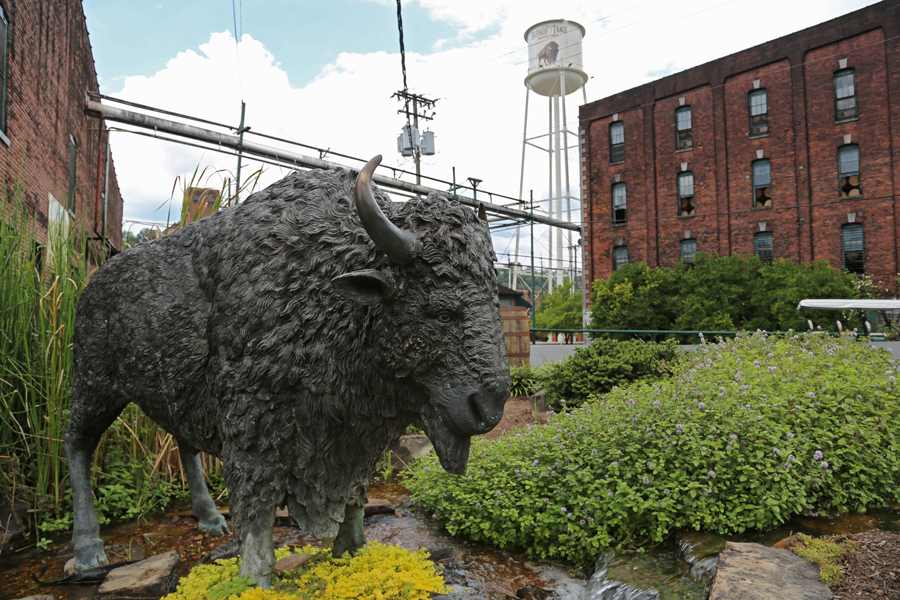 All Photos Courtesy of Buffalo Trace

FRANKFORT, FRANKLIN COUNTY, KY (July 11, 2017) Buffalo Trace Distillery is barreling ahead with expansion plans announced last year, all in response to the continued rise in the popularity of Bourbon whiskey. More than $200 million is being spent at the National Historic Landmark Distillery, as new barrel warehouses are built and the bottling operation is relocated to make room for distillery expansion with new cookers and fermenters.

Already, Buffalo Trace is finishing up the conversion of two former office buildings back into barrel warehouses, with warehouses “R” and “S” being filled with barrels to age now, and warehouses “T” and “U” completed last year. The two buildings hold a combined 200,000 barrels of aging whiskey, but this is still not enough to meet the growing demand for Buffalo Trace.

In addition to repurposing warehouses, Buffalo Trace is also building new barrel warehouses on the additional 200 acres of farmland it purchased a few years ago. These are the first new barrel warehouses with significant capacity that Buffalo Trace Distillery has built since 1951.  Ground has already been broken on the first warehouse, which will hold more than 55,000 barrels, and completion is expected by the end of this year, with the first barrels planned to be rolled in early 2018. After that, a new warehouse will be built every four months for the next several years. These new warehouses will each cost about $7 million to build and another $21 million to fill with barrels, making this expansion a significant investment.

All that Bourbon needs someplace to be bottled, which is why Buffalo Trace is moving its existing bottling operation into its old Distribution Center, located near the visitor parking lot. The new bottling hall will be more efficient, flexible, and improve overall quality. The move is expected to be complete by the end of 2018.

Once the bottling hall moves, the Distillery will install larger cookers and additional fermenters for more Bourbon production.  Already this summer, Bourbon production is scheduled to run 24 hours a day, 7 days a week, for the first time in known history.  “This year we plan to match the all-time high of barrel production here at Buffalo Trace, set in 1973,” said Harlen Wheatley, master distiller. “Next year we’ll exceed that and set new production records.”

While Buffalo Trace is preparing for the future, current Bourbon inventory remains tight on its flagship Bourbon. This shortage will continue for the next few years as demand continues to increase. Brands such as Eagle Rare, W.L. Weller and Blanton’s Single Barrel will see moderate growth. “While we have steadily increased Bourbon production over the years, demand for our brands continues to outpace supply,” said Kris Comstock, senior marketing director. “Growth will be modest over the next few years, dictated by the number of barrels filled years ago. Most will be sold in the United States where demand continues to rise.”

Buffalo Trace will continue Bourbon allocations monthly across the U.S. to ensure each state receives some every month, as they have the past few years. “We will not comprise taste nor quality, so rather than empty barrels prematurely, we’ll continue to wait for barrels to mature and allocate Bourbon when it’s ready, while increasing production for the future,” added Comstock.

The Distillery would like to stress that while the Bourbon shortages are prevalent on all of its brands, they speak only for themselves, not for the entire Bourbon industry.  The overall whiskey category globally is up 4%, and in the U.S. whiskey growth is up 6.5%, according to International Wine and Spirits Research (IWSR).  However, nearly all the Bourbon brands made at Buffalo Trace Distillery are experiencing double digit growth despite allocations.

Although Buffalo Trace is moving forward aggressively with expansion plans, allocations will continue, with no foreseeable end in sight.  Buffalo Trace Distillery would like to thank its customers for their continued support as they endeavor to make more Bourbon, but good whiskey takes time and Mother Nature cannot be rushed!