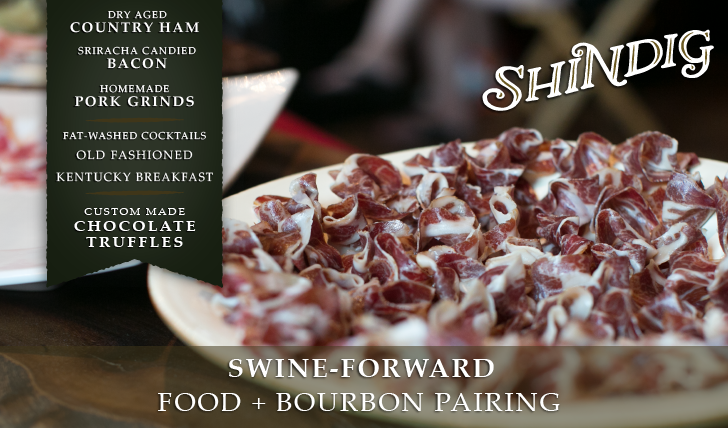 Fat Washed Cocktails – Coming Soon to a Shindig Near You

Story and Photos by Caroline Paulus
Recipes by Jason Curtsinger

This year’s Bourbon Shindig will have a culinary pairing kickoff that can’t be beat – Michter’s Bourbon, country ham, and chocolate. The Bourbon Review has partnered up with Kentucky’s foremost country ham expert Steve Coomes (no, really – he wrote the book on the subject), mixologists Jason Curtsinger and Kyle Ostrander from Belle’s Cocktail House in Lexington, KY, and Arteatables in Louisville to provide a tasting that mixes Bourbon and bacon fat for unexpectedly perfect cocktails.

These Kentucky staples go back to the days of the pioneers. Early farmers and settlers in the bluegrass, lacking grocery stores and refrigerators, needed methods to preserve their harvested corn and freshly slaughtered pork. Corn was distilled into whiskey using the fresh, limestone-filtered water for which the region is known, and pork hindquarters were cured to bacon or country ham.

“Not only are whiskey and country ham part of Kentucky’s multi-century heritage, they make an incredibly nuanced culinary pairing. Their shared flavors of smoke from an initial link, followed by their flavor contrasts: the sweetness of Bourbon with the saltiness of cured pork; the ham’s fatty texture cleansed from the palate with bracing whiskey. And of course, the aromas of each are practically intoxicating,” says Coomes of the match.

When planning for our cocktail recipes first began, fat washing (the process of infusing Bourbon with bacon fat) seemed a little daunting. However, fans planning to try these cocktails or sip on the bacon-infused Bourbon neat will be happy to know it’s far less complicated than it seems. “Fat washing was actually easier than I thought it would be,” said Curtsinger. “I just took an ounce and half of bacon grease, warmed it up, let the Michter’s sit with it for four hours, then put it in the freezer overnight.” The fat freezes to the sides of the container, making straining recommended but a bit superfluous.

An ounce and a half of bacon fat to a full bottle of Bourbon may not seem like much, but it imparts more than enough smoky flavor. We created two cocktails to complement our bacon booze, one a classic Old Fashioned and one we call the Kentucky Breakfast.

The tasting will finish with Bourbon chocolates provided by Arteatables, Louisville’s premier Bourbon chocolatier, known for finding the nuanced notes in a spirit and pairing them with complementary chocolate and sweet flavors.

The full tasting Friday, August 25th at Belles will include cocktails, Michters, country ham, and artisanal chocolates for weekend guests of our Bourbon Shindig. Packages are available through August 8th – Click here to purchase!