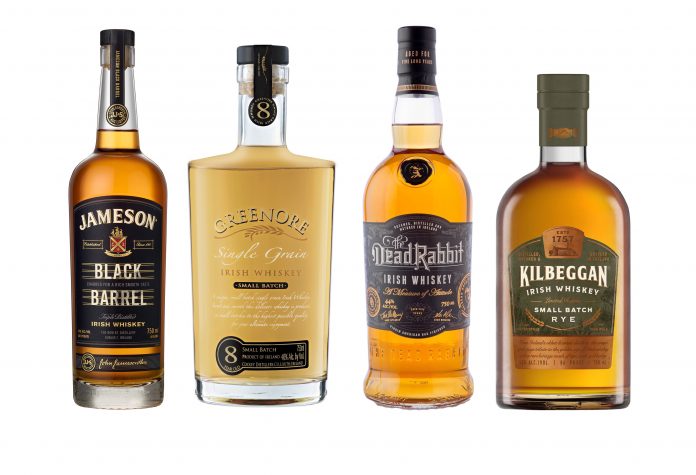 For the American whiskey devotee, Irish whiskey offers a lot of welcoming options: in fact many Irish whiskeys can share quite a few common traits with the likes of bourbon and rye.

We’ve assembled a few great options to help you drink outside your comfort zone, so whether you’re a rye guy or a bourbon lover, there’s an Irish whiskey you’ll appreciate on this list.

Jameson Black Barrel is so named for the fact that the barrels this whiskey ages in are twice charred, first before they’re used as bourbon barrels, and a second time before they’re filled with young Jameson whiskey. The whiskey that results is darker, nuttier, and holds more vanilla and toasted oak notes. It’s a bourbon drinker’s Irish whiskey if ever there was one.

Dead Rabbit is an Irish whiskey through and through, but its creators are the famous owners of the Dead Rabbit Irish pub in New York. The whiskey they sourced for this is a delicious, flavorful blend with a lot of citrus and honey sweetness, and holds up remarkably well in cocktails. Basically, it’s a Manhattan cocktail wiz’s take on what Irish whiskey should be.

You read that correctly: Irish Rye whiskey. Irish rye has been a long-dormant style, but the folks at Kilbeggan have brought it back with 30 percent rye in the mashbill and 70 percent barley. That mashbill, combined with ex-bourbon barrels for aging, makes this one an awfully close cousin to what’s being bottled in Kentucky. The rye is a subtle grain at first, slowly building, before taking over on the finish. For people who like but don’t love American rye, this might be your new go-to bottle when you’re looking for something different.

Single grain Irish whiskey is a bit of deceptive name: the whiskey can be made with several grains, but “single” means that the whiskey can only come from one distillery, like single malts. Greenore is just that: an 8-year-old blend of grains (over 90 percent corn) and a little malted barley. The whiskey is, as you might expect, particularly velvety, sweet, and smooth, with subtle vanilla and caramel flavors.