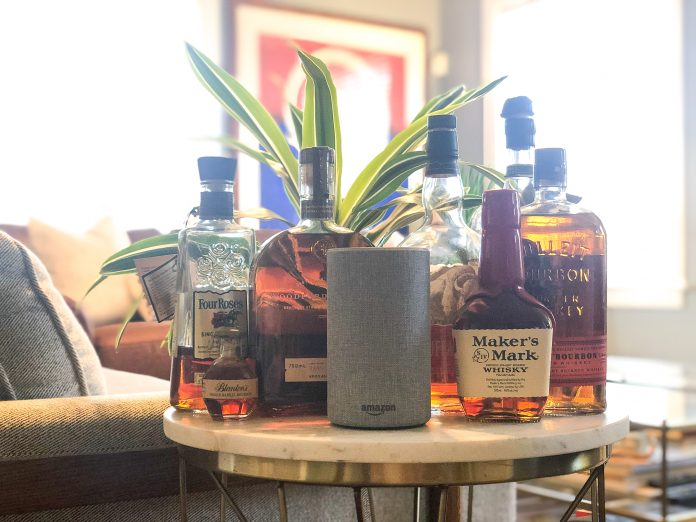 Alexa has her own opinions — including plenty about bourbon! Alexa is the voice assistant built into Amazon devices like the Echo Smart Speakers and Fire TV. If asked, Alexa will tell you the news, weather forecast, or random facts — but she will also tell you what she likes to drink.

When we asked, “Alexa, what is your favorite bourbon?” she decisively responds, “Good question. Definitely Bulleit.”

Alexa isn’t alone on her bourbon preferences. Bulleit is a top-selling bourbon brand and is owned by Diageo, one of the largest producers of spirits and beers. It’s a favorite behind bars, with both their rye and bourbon being featured on cocktail menus across the country.

Alexa also had some thoughts when asked several times to, “tell me a fact about bourbon.”

“Here’s a fact about Bourbon Whiskeys. Bourbon whiskey is best stored at room temperature, where it usually can last indefinitely.”

She’s mostly right here – as long as your bourbon is stored out of sunlight and at around room temperature, you can expect a sealed bottle to last decades.

“Here’s a fact about Bourbon Whiskeys,” she (it?) continued. “Distilling was most likely brought to present-day Kentucky in the late 18th century by Scots, Scots-Irish, and other settlers who began to farm the area in earnest. The origin of bourbon as a distinct form of whiskey is not well documented. There are many conflicting legends and claims, some more credible than others.”

One of the most popular legends is that of Elijah Craig, who is said by some to be the first to char oak barrels for aging whiskey back in the late 1700s. His name can still be found today on popular bottles from Heaven Hill.

When quizzed on the difference between bourbon and whiskey—Alexa was spot on.

We have to add that bourbon must be made in the USA – after all, its our only native spirit.

Will Alexa expand her palate? Only time will tell – but in the mean time, we’ll pour ourselves another Bulleit.