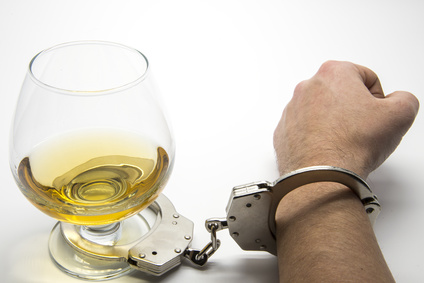 Kentucky’s liquor laws have certainly run the gamut over the last century. During Prohibition, some distilleries, notably the one today named Buffalo Trace, remained open to produce Bourbon for “medicinal purposes,” while others shuttered their doors forever. To this day the state has a scattering of dry, moist, and wet counties, but most of us take for granted our ability to get our favorite booze year round.

But what about other liquor laws across the country? Here are 14 weird laws separating Americans from their hard fought right to party.

1. In Massachusetts, they take their drinking seriously. So seriously, in fact, that drinking games are banned in bars and restaurants, and happy hours are prohibited.

2. In Louisiana, you can take a booze run through the drive through daiquiri stand… as long as the lid stays on and the straw stays out.

3. In Nevada, Las Vegas law has been written to explicitly classify public drunkenness as a health problem rather than a crime, presumably so that the officers of the law have time to do literally anything else.

4. In Utah, a solo diner can order a bottle of wine to go with their meal… but not a pitcher of beer.

5. In Iowa, bar guests are not permitted to run a tab, which really just makes us feel sorry for bartenders who have to pause every time they pour a beer.

6. In Oklahoma and Indiana, stores must sell alcoholic beverages at room temperature.

7. In Alabama, labels for wine and beer bottles must not include any “immodest or sensuous imagery.” Ooh la la.

8. In Alaska, its illegal to offer beer to a moose.

9. In Colorado, its illegal to drink while on horseback, as the horse counts as a vehicle in that case.

10. In Wisconsin, all liquor stores close at 9 pm, thanks to heavy lobbying from the Tavern League.

11. In Utah, restaurants can’t pour or mix your cocktail in front of you, leading to the utilization of something jokingly called “the Zion Curtain.”

12. In Texas, a 16 year old can order a beer at the bar… provided they are with their parents.

14. In Illinois, you may legally drink before your 21st birthday, if you’re enrolled in a culinary program.