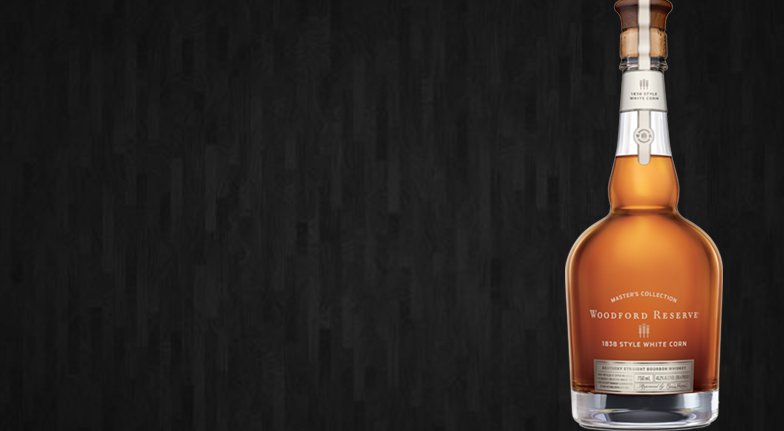 Woodford Reserve just announced the release of its latest product, the Woodford Reserve Master’s Collection 1838 Style White Corn, which will be available for purchase in limited quantities in November. This new Bourbon release, representing a convergence of the brand’s commitment to innovation, and historic roots, pays tribute to the craftsmanship and vision of past distillery industry leaders Oscar Pepper and James Crow and their original use of white corn in their whiskey production process from the late-1830s to the 1850s.

The Woodford Reserve Master’s Collection 1838 Style White Corn was conceptualized and created by Woodford Reserve Master Distiller Chris Morris. Drawing from original production records, Morris was able to develop and bring to life a recipe Pepper and Crow might have used. The 1838 Style White Corn release is both inspired by, and pays tribute to, the techniques developed by Pepper and Crow which today have become some of the most well-known and commonly used throughout the industry.

“This Master’s Collection release has, in a way, allowed us to go back in time and create a new Bourbon by drawing upon materials from our distillery’s historic past,” says Morris. “Focusing on white corn and honoring the landmark work of Pepper and Crow, we worked to produce an expression that we hope they would approve of.”

In the mid-1800s, Oscar Pepper and James Crow engaged in early distilling at the present day site of the Woodford Reserve Distillery.  While at this site, they engaged in innovation, experimentation, and discoveries that ultimately advance the Bourbon and whiskey industries. The key Bourbon production methods created and refined by Pepper and Crow have since been recognized by historians as advancing the modern Bourbon industry and are celebrated through each Master’s Collection release. Their work also helped earn the Woodford Reserve Distillery its National Historic Landmark status in 2000.

This year’s Master’s Collection release especially showcases both the distillery site’s heritage, as well as the brand’s continued focus on innovation. With each Master’s Collection, Master Distiller Chris Morris focuses on one of the five sources of flavor that create Woodford Reserve’s balanced and beautifully complex profile. Released as the latest offering under the brand’s umbrella of ten total Master’s Collection expressions, the 1838 Style White Corn was created by adjusting the whiskey’s first source of flavor—grain. The use of white corn instead of the traditional yellow corn complements additional grains within the liquid.

By using white corn with the same barrels and yeast used to create Woodford Reserve Bourbon, the result is a spirit that is lighter in body with a softer, sweeter, fruit-forward profile. The 1838 Style White Corn will be available for purchase in select markets within the United States and in limited international markets beginning in November with a suggested retail price of $99.99 for 750ml.