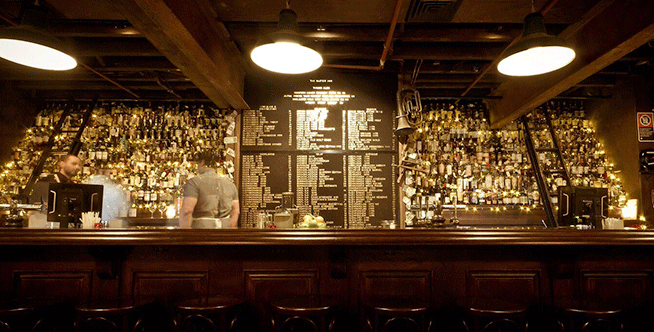 The Bourbon Golden Age has gone global with folks from all over the world not only visiting Bourbon Country to see where the majority of Bourbon is distilled, but also demanding it in the bars and pubs from where they traveled from. Here are some bars abroad that are making a reputation for themselves at being thorough Bourbon ambassadors.

This Danish bar knows how to treat its whiskey, buy giving it its own floor. On the third floor at Lidkoeb you’ll see how they turned their former attic into a whiskey man cave, equipped with favorites such as Four Roses Limited Small Batch Bourbons from 2013 and 2014.

One of the best Bourbon bars outside the States hands down. With well over a 100 Bourbons to choose from this is a must stop if you find yourself visiting the UK.

Giving The Lexington a run for its money, the JW Bourbon Bar’s collection of Bourbon is well over a 100 which included some that date pre-Prohibition.

Waldorf Astoria: Sanghai, China: Sit back and enjoy a cigar while you sip on Blanton’s Original or their Special Reserve.

D-Heartman: Tokyo, Japan: Located in the Ginza 1954 building, the Heartman is a famous whiskey spot amongst locals in Tokyo.

The Bourbon Room on the National on 10th: Calgary, Canada: Live music is paired with Bourbon flights that start at $10.

Emmet Ray: Toronto, Canada: Baxter Inn: Sydney, Australia If you like whiskey then you’re in luck because this Sydney hotspot stocks over 700 varieties of brown water, with over 80 Bourbons.