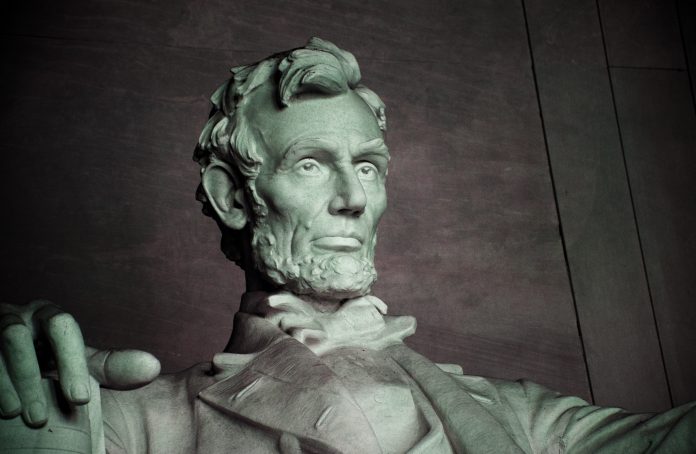 “Tell me what brand of whiskey that Grant drinks. I would like to send a barrel of it to my other generals.”

Backdrop: Criticizers of Grant’s “alleged” excessive drinking approached Lincoln.  Legend has it, that was #16’s witty smart-ass retort.  Shame this Prez didn’t have Twitter. Would be an epic battle Lincoln vs Wendy’s.

Bonus: Most of you know Honest Abe was born on Bourbon State soil. What you may not know, Jim Beam created the now household name brand Knob Creek in 1992 after the stream that ran through Lincoln’s boyhood farm of which he referred to as “the Knob Creek place”.

“I have never in my life seen a Kentuckian who didn’t have a gun, a pack of cards, and a jug of whiskey.”

Backdrop:  In 1815, 2,300 Kentucky militiamen were sent to aid Jackson in the Battle of New Orleans.

“Hugo, I don’t much care for your law, but, by golly, this bourbon is good.”

Backdrop: Spoken to a Supreme Court Justice member as the Prez did not see eye to eye on a ruling.

Bonus: Every morning Truman would have the original breakfast of champions consisting  of an egg, a slice of toast, a slice of bacon, a glass of skim milk, and a shot of Old Grand-Dad.

“You have got to give a man a good reason to vote with you. Don’t try to force him. A man can take a little Bourbon without getting drunk, but if you hold his mouth open and pour in a quart, he’s going to get sick on it.”

“I would enjoy having some Kentucky bourbon with Mitch McConnell.”

Backdrop: Spoken by #44 in 2014 after the GOP had a big night of election victories.

The original G-Dub had mad hella street cred for his whiskey entrepreneurship at his Mt. Vernon farm homestead.  Commercially so as a matter of fact, dating to 1797.  GW’s farm manager, James Anderson had experience in grain distilling from his native Scotland days and it was he who convinced the Prez to begin distilling given the farm’s grain supply, large gristmill, and abundant water supply.

By the time of Washington’s death in 1799, the distillery had blossomed into 5 operating stills making it one of the largest and most profitable distilleries in the country.   To this day, you can visit George Washington’s Distillery at Mt. Vernon as they make whiskey in seasonal offerings using the “old ways” to do it.

Whiskey Rebellion of 1791 – Not Again Damnit!

What caused the Revolutionary War in the first place? Taxes.  What did GW have to implement in order to pay for the country’s debt caused by the war? Taxes.  Whiskey Taxes.  Of which you can imagine didn’t particularly delight the newly settled frontiersmen, many of which were small time distillers using liquid as trade currency and as a way to make good from perishable farm grains as whiskey had longer shelf life.

One such unlucky tax collector agent, Robert Johnson, was tarred and feathered by a group of disgruntled rebellious farmers.  In closure, GW  sent an armed 13,000 troop militia to talk some sense into the new frisky whiskey citizens.  It worked, peace was made.  The end.

TJ wasn’t renown for his fondness of drinking whiskey, that would be for French Wine.  However, he did repeal the Whiskey Tax put in place by Washington as Jefferson believed in less government power, more power to the common people.

In 1997, the 3rd Prez got himself a namesake bourbon from  father and son duo, Chet and Trey Zoeller of Louisville, KY.  The label is going strong as ever in the present day.

During the Mexican War, a political aide reportedly visited to inform Taylor that the Whig party wished to nominate him for president. Taylor allegedly replied: “Stop your nonsense and drink your whiskey!”

ZT’s great nephew went on to be a freagin’ American Whiskey Distilling rock star. That would be E.H. “Colonel” Taylor. The label has been admirably resurrected by Buffalo Trace as the original distilling grounds of The Colonel have been brought back to glory and is now called Castle & Key Distillery. We highly recommended trying the whiskey (tougher to find these days) and certainly taking a trip to see Castle & Key.

Don’t know much about McKinley, other than the poor bastard was shot and assassinated in 1901. However, we did learn he had an American Whiskey cocktail namesake, “The McKinley Delight” which sounded just too darn good not to share.