Tom’s Town, located in Kansas City, Missouri, takes its name from Prohibition-era bootlegger Tom Pendergast. In 1911, after a stint as a saloon keeper for his brother’s business, he founded T.J. Pendergast Wholesale liquor company. When alcohol was outlawed under the Volstead Act in 1920, Pendergast turned to the black market to keep his customers happy. “The people are thirsty,” he said.

And under his rule, they knew their cups would never run dry. Prohibition was good for business, as controlling access to liquor gave Pendergast a great deal of political influence. He had the mayor’s office and most of the police force in his pocket, keeping his not-so-undercover empire safe from legal consequences. A young clothing salesman named Harry S. Truman (later known as the 33rd president of the United States) even won his first political post under Pendergast’s wing. This far-reaching authority led Kansas City to be known as ‘Tom’s Town,’ and taking the lead from their fearless leader, the city mostly pretended that Prohibition wasn’t happening.

As the roaring twenties drew to a close and liquor was legalized again in 1933, Kansas City (or “the Paris of the Plains,” as some called it) had quite the head start on reigniting a night life. “There are more nightclubs in Kansas City per capita than in any other city. Three hundred or more clubs, saloons, hotels, joints and dives – a numerically impressive collection – gives Kansas City it’s reputation as a “hot, wide open town,” wrote the Kansas City Future newsweekly in 1935. 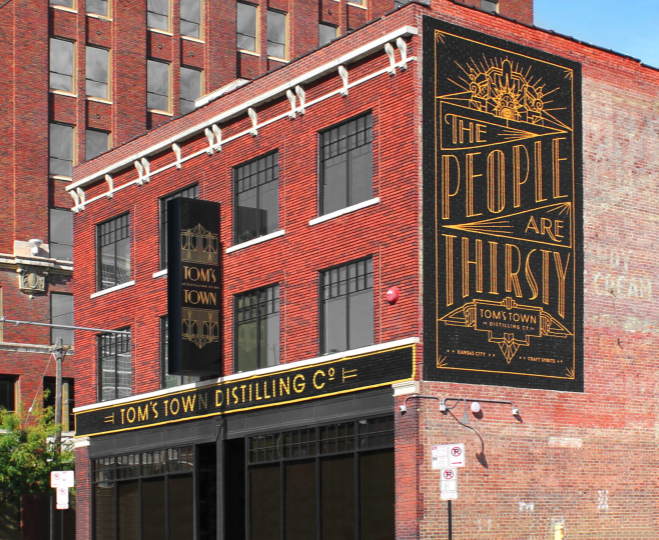 Today, Tom’s Town Distilling Co. still lives by Pendergast’s motto – “The people are thirsty.” The brand was founded in 2015 by Steve Revare and David Epstein. Ironically, Revare is the grand nephew of the attorney who eventually sent Pendergast to prison, while Epstein is the grandson of a rival bootlegger.

The two have released a Double Grain Vodka, a Barreled Gin, and a Botanical Gin under the Tom’s Town name. They’ve also released Pendergast’s Royal Gold Bourbon, a sourced bourbon finished in 14-year-old ruby port casks. And just this month, they’ve announced the release of Tom’s Town Double Oaked Bourbon as a permanent member of their line.

Their Double Oaked Bourbon is distilled with a mash bill of 36% rye, 62% corn, 2% barley, and aged first in a charred white oak barrel. It’s then finished with both French and American oak staves inserted into the barrel before being bottled at 90 proof.

The distillery tells us to expect “notes of maple, butterscotch, and honey, this bourbon provides a soft mouthfeel and a pleasant warm spice in the middle,” and a finish that is “smooth and velvety, with baked cinnamon and toasted nuts.”

“David and I have always been passionate about creative, pioneering spirits,” said Co-Founder Steve Revare. “The finishing process of our Double Oaked Bourbon creates a smooth, distinctive flavor and an exceptional spirit. This is further proof that our distillers’ demanding attention to detail creates a one-of-a-kind product.”

The distillery is also in the process of aging bourbon, malt whiskey, and rye whiskey, but it will be several years before they’re spotted on shelves.

Tom’s Town announced in the fall of last year that their distribution would be branching out from the Kansas City area into twelve states, including California, Colorado, Florida, Illinois, Kansas, Missouri, Nevada, New Jersey, New York, Oklahoma, Tennessee, and Virginia. You can find Tom’s Town Double Oaked on shelves now for around $40.