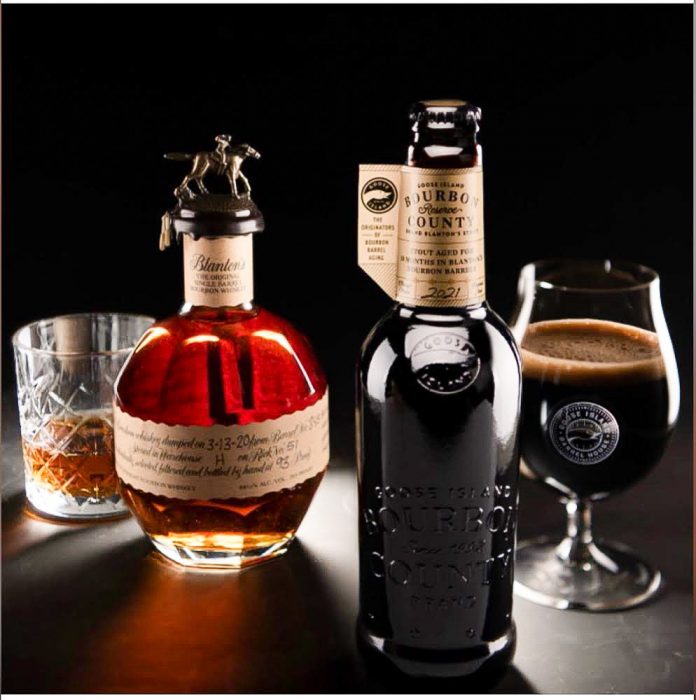 Highlights include a Blanton’s finished 18 months, an Old Forester 150 Anniversary barrel finish, a dessert inspired strawberry ice cream stout, a classic cola inspired stout (with all kinds of flavor goodies to go along with it), and a number of other bourbon barrel finish stouts from Elijah Craig, Buffalo Trace, and Wild Turkey.

The genesis of Bourbon County Stout goes back more than 20 years ago when Goose Island brewmaster Greg Hall was looking for something special for the brewpub’s 1000th batch. As good fortune would have it, he found the inspiration he was seeking after connecting with Bourbon’s legendary Booker Noe and doing something completely unheard of – aging the beer in Bourbon barrels.

Without further adieu, feast your eyes on this year’s 2021 lineup with public debut set for Nov 26th.

Our goal each and every year is to uphold the integrity of Greg Hall’s recipe and make the best Bourbon County Stout possible—and this year is no exception. Our rich Imperial Stout is blended from a mix of bourbon barrels from distilleries such as Heaven Hill, Wild Turkey and Buffalo Trace, each aged in freshly emptied bourbon barrels for 8-14 months. Expect flavors of
chocolate and vanilla, oak, whiskey, and molasses, followed by caramel, berry fruit, and
almond.

At the heart of each Bourbon County are the wood characteristics we thoughtfully amplify. This year, we took wood complexities to another level by doing something we’ve never done before: we took fully-matured Bourbon County Stout and finished it with toasted fruitwood—specifically, honeycomb-shaped cherry wood chips. The versatility of the cherry wood and
honeycomb shape allowed for maximum flavor extraction, revealing complex characteristics like red fruit, ripe cherry, and light toffee, which are not found in the original oak barrel itself. The result is an amazing elevation and a notable difference from our Original Bourbon County Stout.

Our Double Barrel Toasted Barrel Stout was aged for one year in Elijah Craig’s Small Batch Bourbon Barrels, then another year in Elijah Craig Toasted Bourbon Barrels. These toasted
barrels are built to the same specifications as normal bourbon barrels, but are more heavily toasted and very lightly charred. Not only does this stout embody distinctive elements from Elijah Craig’s award-winning Small Batch Bourbon Barrels—like warm spice & vanilla—it also deepened in intensity during its second year of aging. The result? A Bourbon County Stout unlike any before. In addition to the familiar chocolate, caramel, and vanilla comes flavors of toasted marshmallow and a very pronounced fruit and oak finish. Bourbon County Double Barrel Toasted Barrel Stout has a rich complexity and flavor only attainable through true craftsmanship, partnership, expert blending and, of course, patience. This is only the second time we have packaged a “Double Barrel” Bourbon County Stout —and trust us, you’ll want to get your hands on this special limited-edition gem.

We partnered with our friends at Blanton’s and aged our Imperial Stout for 18 months in barrels from one of the world’s most sought-after bourbons—Blanton’s Original Single Barrel Bourbon. Taken from the center-cut or middle sections of the famous Warehouse H, Blanton’s Original Single Barrel was once only available for ambassadors, dignitaries, and friends of the
Blanton family, but now is available for everyone to enjoy. Just as we set the standard for barrel-aged stouts, Blanton’s set the standard for single barrel bourbons. Through our partnership we created a truly unique reserve filled with rich dark chocolate and oak notes, finished with warm aromatics of baking spices such as clove, nutmeg, and cinnamon.

Pushing the boundaries of barrel-aged stouts is in our DNA, and with that we brought to life our first-ever cola-inspired variant. Brewers Paul Cade and Jason Krasowski bonded over their love for a classic cola while creating the Classic Cola Stout. Combining the refreshing nature of classic cola and picking up the flavor profile from a whisky cola, we added lime and orange juice and zest, plus coriander, cassia bark, nutmeg, brown sugar, and vanilla to bring out the complex characters of the classic drink. This is the ultimate twist on a whiskey cola and a must-try for Bourbon County Stout, cola or whiskey/cola lovers.

For the first time ever, we’re digging into the Proprietor’s (Chicago-only release) vault and bringing back a fan favorite with Bourbon County Fourteen Stout. But this time, it’s with a twist. We’re paying homage to the popular Proprietor’s 2014 recipe, but upping the rye ante by adding rye to the mash bill. Layering cassia bark, cocoa nibs, panela sugar, and coconut water, this stout has an intricate, sweet and spicy flavor profile that will have
fans going back sip after sip.

For the second year in a row, Proprietor’s Bourbon County Stout is inspired by a classic frozen treat and brewed again by the mastermind, Emily Kosmal. A flavor house specialist, Emily has the knowledge and skill to bring her dessert treats to life. Proprietor’s Bourbon County Stout is aged in bourbon barrels and blended with luscious strawberries, vanilla and coconut, reminiscent of a classic strawberry ice cream bar. These elements come together to create the indelible flavors of decadent shortcake, layered with vanilla and topped off with the slight fruitiness of strawberries, similar to the ice cream bar’s strawberry core. Emily—who also created the concept for 2016 Proprietor’s and 2020 Proprietor’s—is our first brewer to have three Proprietor’s concepts picked for release.

● “From starting in a crawl space under our original Clybourn Brewpub, to constructing a world-class barrel warehouse in Chicago, to partnering with the world’s most sought-after distilleries – Bourbon County Stout is at the heart of Goose Island’s DNA. For more than two decades we have been integral to the evolution of the barrel-aged beer category, helping to develop it to what it is today. It’s all made possible by the passionate family of innovators at Goose Island – and this year’s Bourbon County Stout lineup reflects just that, creativity and true craftsmanship. I hope you enjoy the complexities and unique flavor profiles of this year’s lineup as much as we do. Cheers!”
– Todd Ahsmann, President, Goose Island Beer Co.

● “I’m truly honored to get to work on Bourbon County Stout every year and work alongside the talented team of brewers and employees who continue to push the envelope year after year. I’m proud to say innovation is evident in this year’s incredible
lineup and I can’t wait for you all to taste it.” – Keith Gabbett, Senior Innovation Manager, Goose Island Beer Co.

● “This year, Bourbon County Stout fans are sure to be excited by some of the more unique flavor profiles we created with innovative techniques, like Bourbon County Cherry Wood Stout. We had a flavor profile in mind when we began creating this beer, and
overtime researched and tested until we figured out the best way to develop it. We used honeycomb shaped wood chips, which allowed for greater surface area and extraction compared to traditional wood chips, helping us achieve more enhanced wood
characteristics to the already impeccable beer. I have to say this beer is one of my favorite variants I’ve ever had, and not only because it is delicious, but because of all the creativity that went into its development.” – Keith Gabbett, Senior Innovation Manager, Goose Island Beer Co.

● “Goose Island has formed deep-rooted relationships with some of the most sought-after whiskey makers in the industry and we’re grateful for the partnership and trust they instill in us to age beer in top notch barrels, like those from Old Forester, Elijah Craig and
Blanton’s. Each year these partnerships allow our Imperial Stout to extract new and exciting oak and whiskey characteristics and complexities to elevate the quality and taste of Bourbon County Stout. While I may be biased as a lover of Bourbon County Stout and good whiskies, I will say that this year’s lineup really isn’t one to miss out on.” – Mike Siegel, Barrels and Beyond Beer Innovations Manager, Goose Island Beer Co.

● “We challenged ourselves to use whole ingredients as much as possible, whole coriander, whole nutmeg, cassia bark, and real citrus zest. It’s definitely not how cola is made these days, but we thought it was a cool nod to the history of this classic flavor
and the best way to honor how special BCS is to us as a company,” said Cade. “Cola is such a familiar flavor. Our biggest challenge was getting all of the ingredients to taste like cola, not nine individual things,” said Krasowski. In the end, this BCS variant has all
the depth and complexity that you might expect from blending nine ingredients into our beautiful BCS base, while, surprisingly, being as refreshing as your favorite cola brand! We hope you enjoy drinking it as much as we enjoyed making it.” – Paul Cade & Jason Krasowski, Brewers, Goose Island Beer Co.

● “With Blanton’s Bourbon being the original single barrel bourbon and Goose Island Beer Company being the original Bourbon County Stout, we knew this collaboration would be special. And after 18 long months in wet Blanton’s barrels our patience has been
rewarded with something truly exceptional. Experts in their craft, the Goose Island Beer Company has mastered the art of barrel-aged beer in this expression. We are excited for
our loyal fans to enjoy this special collaboration.” – Aaron Lawrence, Global Brand Ambassador, Blanton’s Bourbon

● “The 150th Anniversary blend celebrated more than just a momentous time for the Old Forester brand, it also marked the first project in my career over which I had sole
blending authority. Each of the three batches for this highly sought-after release represented a sort of deconstructed peek at the intricacies of this amazing bourbon. Recombining the special flavors each barrel has to give through the process of finishing
Goose Island beer is sure to showcase the incomparable dimension and quality brought to the bottle by both partners.” – Jacquelyn M Zykan, Master Taster, Old Forester Brand