Since 2014, Pinhook Straight Bourbon Whiskey has built a reputation on small batch bottlings with three unique features: rarity (2,000-plus bottles released every six months); high appeal ($65 retail prices fetch at least double that number in secondary channels); and a direct tie to Kentucky horse racing. Each of the brand’s releases is named after a racing thoroughbred owned by Bourbon Lane Stable, one of four partners in Pinhook. You can even follow those horses’ track records on pinhook.com.

This October, the Versailles, Ky.-based whiskey brand will release its first rye, a 93.5 proof called Bourbon N Rye, which is the same name given to another BLS thoroughbred.

When Pinhook’s partners sourced their first barrels several years ago, none had any experience in the whiskey business. That venture started as many do: over the course of a long, wine-soaked dinner. Via family connections and visits to Kentucky, all had fallen in love with the state, its whiskey and its equine heritage. 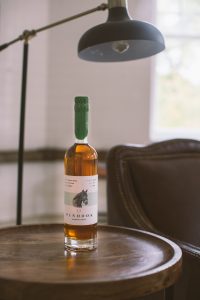 “We were at dinner, the mood was good, and you know how those things go … us saying we really should buy our own barrels,” said Sean Josephs, owner of the restaurant Maysville in New York City and Kenton’s in New Orleans, and whose friends Jamie Hill, Charles Fulford and Mike McMahon are also partners on Pinhook. “The craziest part of the whole story is that we actually followed through.”

They chose the name Pinhook for its origination in the horse trade and its link back to their whiskey picks. Pinhooking is the art of picking a young horse based on its looks, build and bloodline—before it’s ever raced. Pinhookers buy experience and well-grounded hunches, which is still a gamble in the equine game. Those “pinhooked” horses are then purchased for racing stable owners or breeders.

Similarly, Pinhook’s owners view themselves as whiskey pinhookers: choosing barrels from 2008 stock distilled at MGP’s Lawrenceburg, Ind., plant, bottling it under its brand, and hoping that each release is as good or better than the prior one. Born of the same mashbill, each new Pinhook Bourbon release happens six months after the next, meaning its first bottling was six years old, and the most seventh and most recent release will be around nine years old. Just as each release is paired with a different horse, the flavor of that release is destined to be unique.

“By being its own release, it gives us the freedom to choose its final flavor without having to hit the same flavor profile as before,” Josephs said. “We only have to hit the best flavor profile for that release. It becomes a unique bottling for that horse via its own age and proof. That really gives you something different.”

According to Fulford, Pinhook’s choice to name a release after a particular horse is as much a gamble as betting that horse will win. 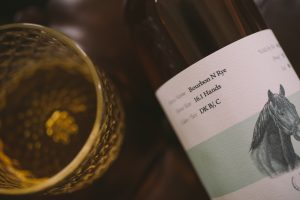 “When we assign a young horse’s name to our next release, we have no idea how it’s going to perform,” said Fulford, who manages marketing for the brand. “Bourbon Courage was the first horse we picked, and it ended up going to the Breeder’s Cup. But we had others that had career changes, such as going in to dressage.”

Not surprisingly, releases whose partner horses do well are in higher demand for collectors and secondary market buyers. The brand’s limited market reach (New York, Connecticut, Delaware, Washington, D.C., Virginia, Kentucky, Louisiana, Colorado, Texas and Illinois) is likely driving up those prices as well, but the brand has no plans to increase its sale price in step.

Since it’s younger, Bourbon N Rye will cost about half as much ($38) when it hits the market this fall. The MGP whiskey is just over 2 years-old (owners specifically wanted the Straight designation) and, according to Josephs,its sweet and spicy with a hint of licorice.

When Josephs visited Kentucky this spring to assess rye samples for this fall’s release, his group tasted samples proofed between 80 and 115. They were drawn to two at 93 and 94 proof, and decided to split the difference. “At 93.5 it hit a particular note that was the most in balance,” he said.

It didn’t hurt that their guide in the proofing session was Marianne Barnes, Master Distiller at Castle & Key in Millville, Ky., and the former Master Taster at Brown-Forman Brands. Still, Josephs, a certified Sommelier, wanted one more test to be sure the rye was perfect. 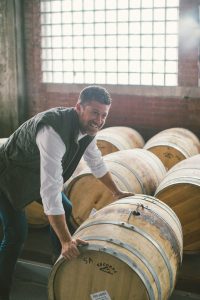 “When we were proofing the rye in the lab, it was all very clinical and removed from the way you enjoy bourbon because you’re judging it,” he said. “So, I asked Marianne, ‘Do you have the ingredients for an old fashioned?’ And she did, and the drink was delicious.”

In 2017, Castle & Key began distilling Bourbon and rye whiskey exclusively for Pinhook, further adding to its Kentucky lineage. Still, given the time required to age its new releases, Pinhook whiskeys bottled will be MGP whiskeys for a bit longer. But that doesn’t dim their excitement in creating a unique mashbill with Barnes for their future releases.

“We love the idea that no one else will have that same mashbill on their products, that Pinhook will be its own thing,” Fulford said. “Plus, we have the luxury of having Marianne’s experience and her ability to work on the blending and proofing for us.”

In reality, Barnes, a newly christened master distiller, is a symbolic pinhook pony—albeit one with a great whiskey bloodline. A degreed chemical engineer, Barnes landed a prized internship at Brown-Forman while in college. That led to her Master Taster’s post and several years of tutelage under legendary Master Distiller Chris Morris.

So, while technically it’s true to call her whiskey unproven—none of what she has distilled at Castle & Key is older than 10 months or ready for release—it’s safe to say she knows what she’s doing. At the very least, Pinhook’s partners believe they’ve placed a safe bet, which only adds to Barnes’ excitement about their brand.

“To do everything from scratch with them has been a lot of fun,” said Barnes, who is distilling on contract for multiple brands including ones that will be released by Castle & Key. “I think it’s going to be great being involved with those guys going forward.”