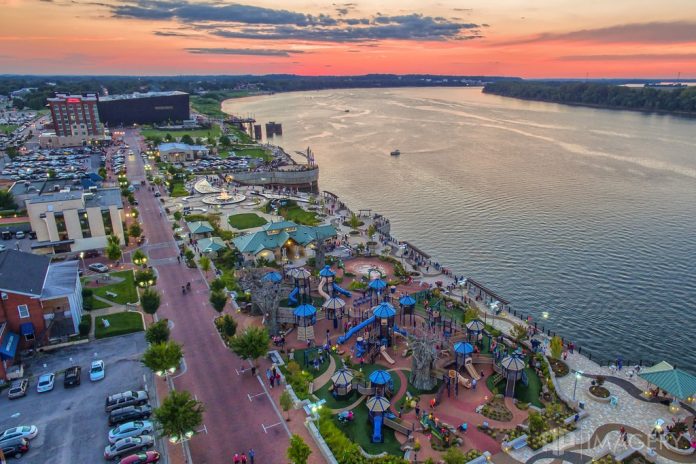 Kentucky’s fourth largest city ranks even higher on charm, adventure, and we’re sure it’s the best bourbon-inclusive getaway destination you can plan to visit right now.

Owensboro, Kentucky is, from the moment you enter the city limits, one unexpected turn after another. Riding in past industrial sites, the expectation is set modestly, and then suddenly, the streets open up into a charming downtown, thriving main street, and diverse wonder of spaces to explore (and a distillery picking up momentum with each new barrel filled).

Nothing is what it seems here. Behind every door and down every hallway is an unpredictable treat. Some of this is creativity in repurposing of spaces, like the sprawling multi-vendor market spread among the former classrooms of an old school building, Preservation Station. Other spaces, like the waterfront Smothers Park, are visionary designs and uses of community spaces, with picturesque views.

Owensboro is, in many ways, two cities intertwined. The first city was laid down in the 1800s, when it was first spelled ‘Owensborough.’ This first city brought the wool trade, and with it the early start of Owensboro’s unique contribution to the world of southern barbecue: barbecued mutton.

The second city, with its thoughtful planning and modern dimensions, comes from clever city planning that began with a revitalization initiative in 2008. There are activity spaces, public art initiatives, and plenty of mixed use buildings sporting condos and apartments over storefronts and offices.

That initiative has done well to add to the city’s charms without losing the predecessors; it’s become a city with just about everything. And we’re not exaggerating that claim; in Owensboro you can see a museum exhibit on 19th century stained glass in the morning, and axe throwing in the afternoon.

Though Owensboro is fertile land for several of the arts, the most unexpected and impressive display is the city’s Museum of fine art: a stitched together trio of buildings that together are home to a maze of fascinating works of art from varied schools, media, and periods. Its collections represent art across the world, from the local community, and across a wide swatch of history. It’s truly breathtaking—and trying to see everything in less than an hour would be truly overwhelming.

And that’s just the visual arts—we haven’t even gotten to the Bluegrass Music Hall of Fame and Museum. A sprawling space, made up of performance hall and museum together, it’s a place where you’re just as likely to see an impromptu live performance as a permanent exhibit on the history of one of the country’s most influential musical genres.

For something weird, head to Escape Today Owensboro: a conglomerated mass of adult arcade and activity rooms. At the moment, they’re featuring escape rooms, classic arcade games, axe throwing, and a rage room. It’s a small business founded by two local guys who like building fun stuff. If nothing else, it’s worth a quick trip by to take a look, and waste an hour away with a familiar arcade game like Pac-Man or Star Wars.

As for the bourbon scene, well, there’s a lot to be seen. J’s Liquor is a better-than-most bottle shop, with a better-than-most bar in the back. It’s setup for minimal drinks, but the straight and rocks pours are what you’re there for, with Van Winkle and other rarities priced affordably for a taste.

And then there’s Green River Distilling Co. Green River is currently helmed by third generation Kentucky whiskey maker Jacob Call. Call took us on an extended tour of the distillery on a particularly sunny afternoon, winding back and forth among the buildings of a massive distillery campus. He pointed out images of the buildings how they acquired them: in a state of disrepair, needing love and care.

Call has since brought production up to near-full capacity, and has slowly but surely begun to fill the warehouses.

He’s not heat cycling, nor is he rotating at the moment. You quickly get the sense that the road map for this distillery’s success is a straight shot down the “traditional” route, and from what we saw, the right decisions are being made.

They’re inching towards a four year aged bourbon release which is scripted for 2021 debut.  Should they ever see fit to release a cask strength, single barrel, or bottled-in-bond rye, we’ll see you in line. Their traditionally aged whiskeys are on track to be as good as anything else coming out of Kentucky today.

There’s so much more packed into the limits of Owensboro that we know you can’t pack it all into one weekend. So rather than try to figure out how that could work, we’ve put together a list of 10 musts for your first visit of many to come.

This list will help you maximize your experience, with some comforts along the way.

It’s hard to define exactly how long the Bluegrass Hall of Fame and Museum will take you. Sure, you could breeze through the exhibit in 15-20 minutes if you were in a rush, but you’d miss out on more than just exhibit details. The multi-use space plays host to concerts, recordings, and historical preservation, but its most attractive feature is a free-play pickin’ room complete with every instrument you’ll need for a jam session, whether you’ve never plucked a string or you’re one of the Hall of Fame’s hallowed members.

Tip: Even if you’re not one for attention, take a look in the pickin’ room—you never know what bluegrass celebrity might be killing time or giving a spontaneous show.

Rainy day or not, the Owensboro Museum of Fine Art should be near the top of your activity list. We were blown away by the diversity of collections and exhibits on display in this marvelous maze of an art showcase. An hour will get you a quick survey of everything going on, which will include interactive and local exhibitions as well as a variety of rotating exhibits. The permanent collection includes, “American, European and Asian fine and decorative arts dating from the 15th century to the present; a collection of contemporary studio art glass; a major collection of American Folk Art; and a collection of works by artists and craftsmen with Kentucky connections from the early 1800′s to the present.” Expect the unexpected.

Smothers Park spends half the year as the gorgeous, scenic waterfront view for Downtown Owensboro, and the summer as the staging ground for Friday After 5: a concert and activity festival that takes place every Friday throughout the summer. But regardless of what time of year you go, keep your eyes on the details: a variety of public artworks and architectural beauties make this one of the prettiest walks in all of Kentucky.

Tip: Bring the kids. Smothers Park is home to the award-winning Lazy Dayz Playground, a whimsical, state of the art playground that made us adults pretty jealous.

Unofficially known as the nicest Hampton Inn in the country, this towering waterfront property has gorgeous views on both sides of the building (though the water is clearly superior). The rooms are sizable, and the hotel is walkable to most of downtown’s most attractive sites, During the summer, you’re just a few steps from the festival fun of Friday After 5, but the rest of the year the peaceful river views and city lights are just as lovely.

Tip: make time to have old fashioned at the hotel’s restaurant Lure—the best we had in town during our stay.

No charming small-ish town would be complete without a whimsical, bohemian coffee house, and Owensboro’s Crème Coffee House is it. The coffee is solid, with tons of comfy seating available in case you need to squeeze in some emails, or just recover gradually from the night before.

Tip: No seats? Grab your drink and head down a block to the waterfront, and take some views in with your caffeine.

Old Hickory is a charming mom-and-pop style barbecue diner; it’s also one of the award-winning homes of Western Kentucky’s unique barbecue concoction: barbecued mutton. At Old Hickory, the mutton is fall-off-the-bone tender and intensely flavorful. Feeling something a little lighter? A cup of the local Burgoo (a hearty, big-batch stew). You’ll find a wide range of sauce options. We recommend the chopped mutton sandwich, drenched thoroughly.

Tip: Save room for banana pudding.

A popular burger and dog fast food stop during the lunch hour and the summers. The must-try item is the pig in a blanket: a cheese-stuffed hotdog wrapped in bacon, served in the standard hotdog roll. Must be ordered with “gems” (tater tots, for the rest of us), for your own happiness.

Tip: Not up for the calorie bomb? Limit yourself to a milkshake for a refreshing treat between activities.

SPIRITS LOUNGE AT THE MILLER HOUSE

The Miller House’s turn of the century Sears Roebuck bones provide a classy yet versatile backdrop for Owensboro’s number one must-visit restaurant. Fresh seasonal fare, with an eye to what’s available locally, is the name of the game in this American cuisine space, but not at the expense of comfort food, southern style. The ample, 600+ bourbon list is not designed for the sake of numbers, either, but shows a well-curated diversity of old, new, rare, and popular bottles. {And yes, they made The Bourbon Review’s “Best Bourbon Bourbon Bars in America” 2019 list.}

Tip: Allow an extra hour for a flight, especially if you’re looking to check rarer pours off a bucket list.

Arguably the friendliest after-work barspace in town is the sample bar in the back of J’s Liquor. The shop plays home to the local Bourbon Society, which selects a handful of fantastic single barrels a year, some of which can be tasted at the bar at generous, welcoming costs per pour. The shop itself has a great selection of bottles if you’re filling empty spots in your own collection. This is a 100 percent must-visit.

Tip: Check the price list and the back wall both; you’re more likely to find some gems.