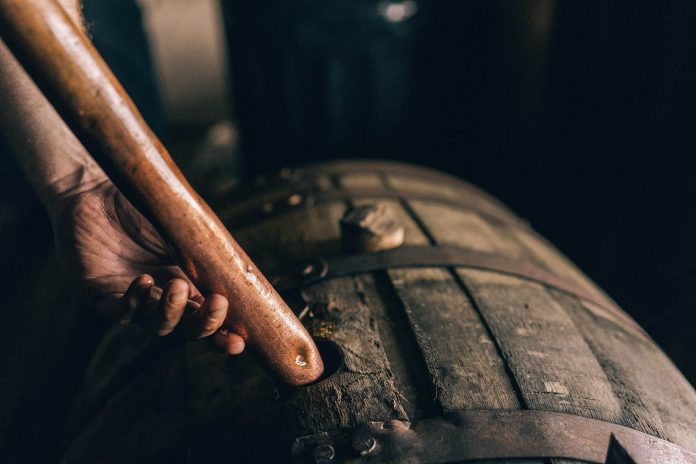 As a journalist, it’s always embarrassing to go back and read your old articles. Especially when reporting on an industry like bourbon, whose trends go from under-the-radar to mainstream to having completely jumped the shark, sometimes within a single calendar year. Such is the case for an article I penned for The Daily Beast in June of 2015:  Yes, You Can Buy Your Own Bourbon Barrel. In it, I sound like a wide-eyed college kid as I detail the (shocking!) process of (can you believe it?!) being allowed to purchase an entire (AN.  ENTIRE!) barrel of bourbon.

“Countless bourbon enthusiasts are now traveling down to Kentucky to explore the opportunity, often buying a barrel on the spot, just like they might pick out a new car,” I wrote back then, back when private barrel selections were still a bit of a secret mostly only known by the cognoscenti. Six years later, I now receive several notifications a week from liquor stores, restaurants, bars, and, often worst of all, whiskey clubs touting their latest barrel “pick.”

“Without a doubt the most incredible barrel we’ve ever picked,” the sales email will say.

“We are so lucky to have landed this barrel,” an Instagram will claim.

“This is a true unicorn barrel!!!” a Facebook post will tout, with a direct link to purchase one of the mere 178 bottles currently available at $99 (going fast!).

There just isn’t as much great whiskey out there as all these single barrel pickers would have you believe.

Back in 2015, when I wrote that Daily Beast article, it was a completely different world. It was a time when, if you had, oh, around 8,000 bucks lying around, you could fairly easily secure real honey barrels of stuff like Russell’s Reserve or Knob Creek or Old Weller Antique or perhaps even something from Willett.

No matter your line of business, everyone likes to sell their products in bulk if possible, so for most of American whiskey history, if you were a big enough baller to want an entire barrel of booze, well, pretty much all distilleries would sell it to you. For the buyers, this purchase wasn’t just something to flex about—it was more a way of assuring your restaurant would always have its own “private stock,” your liquor store would have its own house brand on offer, or that you’d always have some personal bottles you could gift friends when you felt like it.

When the popularity of bourbon again began to rise in the late-1990s and early-aughts, single barrel “programs” (as they became known) began to get more formalized, specifically pushing these barrels toward top customers. One of the first modern private barrel programs was launched by the recently-refurbished Four Roses around 2004. The distillery, which had just again started selling bourbon in America after years of peddling blended swill, wanted to garner some industry buzz. So, they targeted top retailers, allowing them to pick their own barrel and even create their own custom label for the side of the bottle.

“It ensured us more floor space in these outlets—thus, obviously, more exposure in an account,”  Patty Holland, Four Roses national sales director, once explained to me.

Today, of course, every major liquor store (especially the big box) needs to have barrel picks from countless distilleries, and if you taste many of them, you start to wonder if any scrutiny was actually put into the “picks” or if the retailer was simply told by his distributor: “Here are your picks for the year!” Don’t get me wrong, if it comes from a major Kentucky distillery, it will almost always be solid, but it seems it will rarely be mind-blowing any more.

Every half-way decent whiskey bar or restaurant has their own picks these days too, all the better to highlight on their menus and perhaps charge a few extra bucks for. And, of course, if you have your own whiskey club, even if that “club” is just ten guys sitting around a garage once a month, you also need your own picks. (“Proudly selected by the Southeastern Yakima Bourbon Club.”)

But incredible single barrels don’t just come off an assembly line. If they did, they would probably just be what distilleries released directly to the market. And, that’s why so many single barrel picks these days hardly seem special. All the big boy Kentucky distilleries now offer hundreds per year, there’s a waiting list for most, and even if you are lucky enough to get to pick one, it’s not like you’ll have carte blanche to wander the rickhouses until you find the absolute best barrel in there.

With dozens if not hundreds of newly-sprouted whiskey clubs needing to affirm their existence with their own single barrels, many have been forced to go pick them from craft distilleries that have hardly distinguished themselves. Others have moved onto non-distiller bottlers like Smoke Wagon, Blue Note, and NuLu that literally didn’t exist until just recently. It doesn’t matter, as often the “juice” is the same MGP or Dickel that everyone else has and rarely is it all that mature. But, if you can bottle it as a 5-year-old single barrel pick from the Tulsa Bourbon Boyz or the Cheboygan Whiskey Hounds, you can probably still sell it for $110 to eager buyers.

(Private barrel picks now even have their own secondary market group on Facebook called The Pick House, where some of these picks go for upwards of $1,000.)

This shark-jumping is furthered by all the IP-infringing stickers and colored wax and other crap being added, post-purchase to the bottles to try and make them actually seem special (and worthy of posting on Instagram and Facebook). At first I found these stickers funny, cute, a way to add a little pizzazz and personalization to private picks on top of the quotidian hang-tags or small decals the distilleries add. In fact, I believe I’m the first journalist to have seriously written about the rise of, what I, in 2018, called, “private labels.”

Today, however, many now derisively label these as “tater stickers,” evoking the epithet for neophyte collectors driven by hype and bad decisions. (There’s even a Krogman’s [who?!] single barrel pick that lampoons this called, fittingly, “Tater Bait.”)

In a way, all of these additions are just a smokescreen to cover up the fact that the liquid portion of today’s barrel picks are rarely special any more. If, in the aughts and early 2010s, it seemed teenage Willett barrels were just hanging around waiting to be picked, today’s whiskey clubs are often grabbing nothing more than the same youthful dregs everyone else is.

“Look at all the crap that gets private-picked in the bourbon world,” I saw someone complain in a private Facebook group recently. “In 75% of the cases, off-the-shelf [bottles] are better.”

Which makes you start to wonder if that latest “pick” you’re being offered was something that somebody truly wanted to pick, or if the picker really had no choice.

Aaron Goldfarb lives in Brooklyn and is the author of Hacking Whiskey.