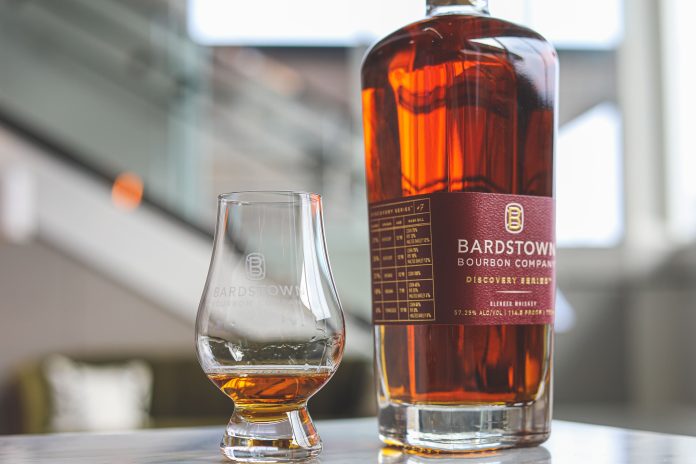 The Field of Dreams whiskey maker Bardstown Bourbon Company has just released two new bottlings from their sought-after Fusion and Discovery expressions. Fusion Series #7 and Discovery Series #7 are now available at the distillery, and distributed in 20 markets across the country. Both expressions highlight complex mashbills and explore the art of modern bourbon blending.

The Discovery Series was designed to showcase the art of blending with an emphasis on old and rare whiskies sourced from a variety of origins. Discovery Series #7 is no exception, which for the first time incorporates not only aged bourbons and rye, but also features aged Canadian Whiskey sourced from Ontario. This is the first time the series reaches into international territory, pushing the boundaries of contemporary bourbon blending practices.

Discovery #7 includes three aged straight bourbon whiskies blended with rye and Canadian whiskey to create a smooth and complex expression. As noted by the brand, baked cherry with a touch of mint rests on a rich raspberry genoise. A creamy, round mouthfeel highlighted by baked apple and brown sugar leads to a luxurious, lasting finish. Discovery Series #7 is presented at 114.5 proof and offered at an SRP of $139.99.

The Fusion Series bridges the past and the future through blending older sourced whiskies with more recently distilled stock produced by the company at its Bardstown, Kentucky distillery. The journey of the unique series has been to see the changing product as the Bardstown Bourbon Co. bourbon ages, becoming more prominent in the blends over time. Fusion series releases show a range of mash bills across the selected aged products and includes corn, rye, wheat and malted barley.

Fusion #7 is 70 percent three-year-aged bourbon produced by Bardstown Bourbon Co. and 30 percent twelve-year-aged sourced whiskey. It includes five distinct mashbills – three from three-year-old Bardstown Bourbon Co. distilled whiskey and two from 12-year-old sourced stock. As noted by the brand, exquisite contrast of vibrant nectarine with toasted almond and honey leads to cedar and rich toffee with light tannin on the palate. An elegant finish showcases the delightful balance between youthful and aged Kentucky Bourbon. Fusion #7 is presented at 98.1 proof and is offered at a suggested retail price of $64.99.

Three aged straight bourbon whiskies, blended with an Indiana rye and Canadian whiskey to create a smooth and unique expression.

Founded in 2014 by Peter Loftin in the heart of Bourbon Country on 100 acres of active farmland, Bardstown Bourbon Company, 1500 Parkway Drive, Bardstown, Ky., is one of the country’s most modern and technically advanced whiskey distilleries. Celebrating the art of making high-quality, authentic bourbons, the innovative distillery produces custom rye, whiskey and bourbon for prominent brands including High West, Belle Meade, Hirsch and many others through its one-of-a-kind collaborative distilling program. Bardstown Bourbon Company honors tradition and drives innovation with their exceptional destination experience for visitors, offering the only full-service restaurant located within a distillery on the Kentucky Bourbon Trail, The Kitchen and Bar at Bardstown Bourbon Company.