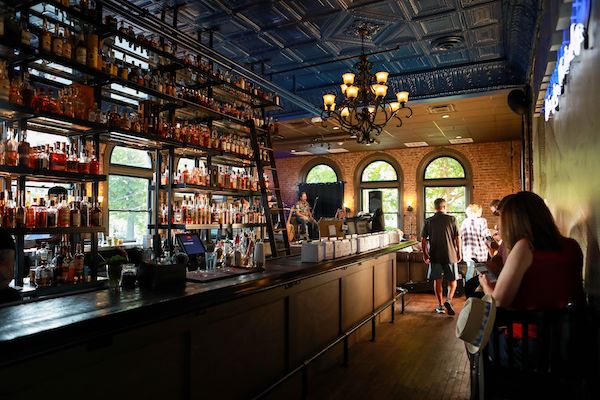 Think of it as the northern gateway to all things Bourbon Country with a constellation of bars, restaurants, and distilleries all deeply immersed in America’s Native Spirit. There are now a total of 5 Kentucky Bourbon Craft Trail Distilleries, 8 bars, and 6 bourbon centric-restaurants on the B-Line experience. Plan your own self-guided tour of pleasures and get 2 stamps or check-ins from each of the 3 destination categories.

Northern Kentucky’s meetNKY President and CEO, Julie Kirkpatrick notes ” “Beyond the five senses, history is a huge part of the Kentucky bourbon experience. And the history that surrounds these new B-Line stops is incredible. From historic buildings and urban sports stars to paranormal spirits, these venues have stories of revitalization and resurgence to tell.”

Here’s a breakdown of the four new stops:

Located in the historic Citizens Telephone Building in Covington, Smoke Justis is an urban sports bar named after urban legend, Walter “Smoke” Justis, who was the opening day pitcher for the Covington Blue Sox on May 9, 1913.

The bar at Smoke Justis in Covington (Photo from NKCVB)

“We are thrilled to join The B-Line and work toward expanding Northern Kentucky as a bourbon place,” said Richard Dickmann, owner of Smoke Justis. “Roebling Point is a prime location at the foot of the Roebling Bridge and the front door of the South and Covington. We look forward to welcoming a lot of new visitors to Bourbon Country.”

“The Wainscott family has a longstanding history in the restaurant business, and that experience shows in the passion they pour into Libby’s,” Kirkpatrick said. “It’s another B-Line venue for folks to experience delicious southern cooking washed down with a pick from their impressive bourbon selection.”

In Bellevue is located in a historic 1880s brick three-story home and features outdoor seating & games in a dog-friendly yard with picnic tables and green space. Owned by Bellevue native Charlie Zimmerman and his wife, Leslie Blair, Three Spirits is also a veteran-owned stop on The B-Line

“It is very exciting for us and Bellevue to be joining The B-Line,” said Zimmerman. “Only a mile from downtown Cincinnati and a few blocks away from New Riff Distilling, Three Spirits Tavern is an excellent place to relax and unwind after a day of exploring all of the bourbon culture in Northern Kentucky.”

Featuring more than 100 bourbons & ryes, Three Spirits prides themselves in their house cocktail creations, including the “Funken Old Fashioned” with a coal black king cube, named after Nicholas Funken, a local coal broker, who tends to make his presence known in “spirit” around the bar from time to time.

Also added to The B-Line is The Beehive Augusta Tavern in Augusta, Ky., which offers farm-to-table dining live entertainment, and a large bourbon selection overlooking the Ohio River and Augusta Ferry.

“Some people are put off that Augusta seems far away from The B-Line’s urban core of bourbon experiences, but I’ve never heard anyone say they regret the scenic drive down Route 8 to Old Pogue in Maysville with a stop in Augusta,” Kirkpatrick said. “You might even luck out and see the Clooneys while in this charming riverfront town!”

The building housing the Beehive was constructed in 1796 on land granted to a veteran of the Revolutionary War. During the Battle of Augusta in 1862, the building was set on fire, then fell further into disrepair after the Great Flood of 1937. In the 1970s, the row houses were saved from demolition and added to the National Registry of Historic Sites before becoming the first incarnation of The Beehive in 1985. In 2017, the building underwent a major renovation that brought a new life to the restaurant and has earned the approval of visitors and locals alike.