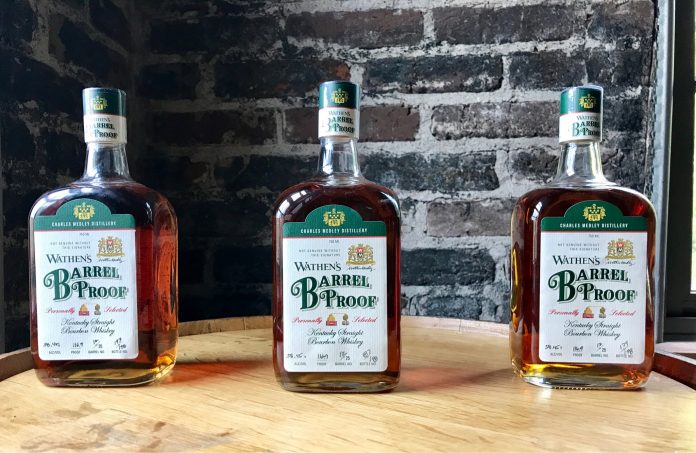 Charles Medley Distillery is releasing another special-release, Wathen’s Barrel Proof. Only 25 barrels of this singel-barrel Bourbon will be released, with proofs ranging from 109.6 to 118.6.

While this will be the first release of Wathen’s Barrel Proof, the Wathen’s brand has been available at 94 proof in Kentucky for 20 years. “All our brands honor brands my family has owned in previous generations,” says Sam Medley, an 8th generation distiller and co-owner of Charles Medley Distillery. Bourbon is in Medley’s blood – the name Wathen’s comes from his great grandmother’s maiden name. The young Ms. Wathen (herself the daughter of 4th generation distiller) married Medley’s great grandfather (a fifth generation distiller) and named their son Wathen Medley. He and his brothers developed the flagship bottle Medley Brothers in the 1940’s.

According to Medley, Wathen was known to keep a special stash of Bourbon on hand for guests at all times. Long before the advent of the term “single barrel” with the release of Blanton’s in 1984, he would choose a favorite barrel to bottle and offer as his private stock, calling it “Wathen’s Kentucky Bourbon.” The new Wathen’s Barrel Proof release is a nod to this family custom.

Medley shared that the mash bill for these bottles uses a lower than industry standard of rye while the corn and malted barley used to round out the rest of the ingredients is a higher percentage.

“My great grandfather developed our mash bill after Prohibition. We’re very proud of it – he said people drink Bourbon because its sweet, so if corn is what makes Bourbon sweet, the more corn the better,” says Medley. He has his reasons for the high malted barley content as well, stating it smooths and sweetens the finish for a higher proof juice, as well as improves the viscosity.

CMD released their 10-Year Private Stock in 2015. They followed up in 2016 with Medley Family Private Selection, consisting of 11 single barrels chosen by members of the family in honor of Medley’s father’s 75th birthday, Charles.

Four barrels so far are coming to Kentucky – one each at the Liquor Barns in Louisville and Lexington, one to be shared between Belles Cocktail House and the Bluegrass Tavern in Lexington, and one at White Lightning Liquor Store in Owensboro.

Wathen’s Barrel Proof will be available for purchase starting in November in markets across the country at a suggested retail value of $85.