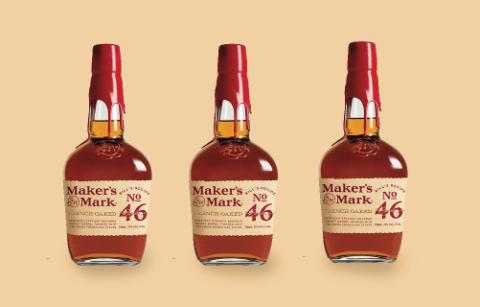 The following materials were provided verbatim in a Press Release by Maker’s Mark.

The Maker’s Mark Distillery is proud to unveil a new Maker’s Mark 46® bottle and design that highlights the brand’s handmade values and helps better tell the story of the beloved and distinguished liquid fans have come to know and love. The new design puts the uniqueness of the liquid on full display, differentiating itself in the proprietary French oaked process that gives Maker’s Mark 46 its characteristic layers of faceted flavor. While the bourbon inside the bottle remains the same, the new bottle design reinforces consistency of the brand’s visual identity and more tangibly brings to life its premium legacy.

French oaked for layers of flavor, Maker’s Mark 46 is the taste vision of Bill Samuels, Jr., that helped him make his mark on the family legacy. After over a decade in its original packaging, the new bottle better aligns with the visual identity comprising the full Maker’s Mark suite and better clarifies what makes the Maker’s 46 liquid special – French oak – while making clear to consumers that the liquid they love has not changed by so much as a drop. By more boldly leading with descriptions of “French oaked,” bourbon drinkers new and old can understand what flavor profiles they can expect to find behind the label.

Originally released in 2010 under the taste vision of Bill Samuels, Jr., son of the Maker’s Mark® founders, Maker’s Mark 46 was the first new major expression to be created at the Distillery since its original bourbon went into production in 1953, and the first offering from the brand’s wood-finishing series. The innovative wood-stave-finishing process starts with fully matured Maker’s Mark at cask strength. Ten seared virgin French oak staves are then inserted into the barrel and left to mature for an additional nine weeks in the Maker’s Mark limestone cellar. The result is Maker’s Mark 46 with amplified layers of caramel, vanilla and baking spice, with a longer finish. Tireless experimentation, expertise, passion and persistence paid off in the creation of the Maker’s Mark 46, with a complex taste that amplifies all of Bill Jr.’s favorite flavors while staying true to the original. With this exterior makeover, Maker’s Mark 46 looks almost as good as it tastes.