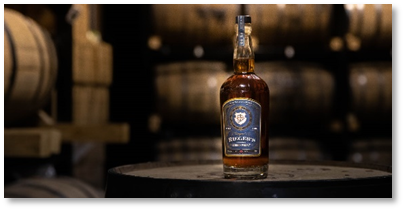 [KANSAS CITY, MO] After six years of aging in 53-gallon white American Oak barrels, J. Rieger & Co., the historic Kansas City based distillery, announced this week the release of its 1st Edition ‘Rieger’s Bottled in Bond Straight Bourbon Whiskey’. The limited release is the brand’s first Bourbon offering since pre-Prohibition, which originally closed the distillery in 1919.

Ryan Maybee and Andy Rieger, Jacob Rieger’s great-great-great grandson, resurrected the distillery in 2014 and are thrilled that Bourbon will be available at the J. Rieger & Co. distillery and in select retail stores throughout Missouri and Kansas beginning June 2nd.

This bottling, which began in the early days of the distillery back in 2015, marks the beginning of J. Rieger & Co.’s Bourbon program. This batch of Bourbon is bottled at 100 proof and meets the additional qualifiers to be designated as Bottled in Bond.

“As the quintessential American spirit, distilling our own Bourbon was a goal of ours before we ever officially reopened the distillery,” said Ryan Maybee, co-founder at J. Rieger & Co. “This is the first Bourbon that we have produced since before Prohibition, and we knew it needed to be something special, something that would honor tradition and live up to being, ‘O! So Good’. We allowed this Bourbon to age in our Kansas City rickhouse for a full six years before bottling, and it’s finally ready.”

As a young distiller in 2015, J. Rieger & Co. began putting away just a few barrels of Bourbon a month. As the years went on, the distillery was able to start distilling more and more Whiskey every year. Today, J. Rieger & Co. is now putting away a hundred barrels a month and is looking forward to bringing more Rieger’s Bourbon for generations to come.

The 100-proof spirit is made of a mash bill of 56% corn, 30% rye and 14% malted barley, creating a classic Bourbon. Each batch was distilled in a 750-gallon copper pot still before being transferred to the white American Oak barrels within the distillery in the historic Electric Park neighborhood of Kansas City.

TASTING NOTES (Provided by the brand)

Tasting notes feature aromas of tart fruits upfront, lemon oil, apple pie, clove, and hints of maple. On the pallet, flavors are led by sweet fruits, including dark cherry and plum. The Bourbon features a rich, elegant and buttery texture, with flavors of cigar smoke, cornbread, and cotton candy. The finish has more complex flavors of honey-cinnamon, dark-roast coffee, vanilla, caramel, and sea salt, with a lingering effect reminiscent of a stout beer with a rich, malty flavor profile.

In order for a product to be labeled Bottled in Bond, the alcohol must be a product of one distillation season, by one distiller, at one distillery. It must be aged for at least four years and bottled at 100 proof. Only spirits produced in the United States may be designated as bottled in bond.

J. Rieger & Co. was originally founded in 1887 in Kansas City’s West Bottoms neighborhood. The distillery was the largest mail-order whiskey house in the United States prior to the onset of federal prohibition in 1920.

In 2014, the brand was relaunched by business partners Ryan Maybee and Andy Rieger, the great-great-great-grandson of Jacob Rieger, with the release of Rieger’s Kansas City Whiskey. The current distillery is located in the historic Electric Park neighborhood within Kansas City and is open seven days a week offering tours, food and cocktails in the Monogram Lounge, the Tasting Room, The Hey! Hey! Club and the recently opened Electric Park Garden Bar.

Today, J. Rieger & Co. is distilling more than 1,200 barrels of Rye and Bourbon Whiskey annually. On August 16, 2020, J. Rieger & Co. released Rieger’s Bottled in Bond Straight Rye Whiskey. This was the first whiskey distilled in Kansas City since Prohibition and marked the beginning of a new chapter in the J. Rieger & Co. story.