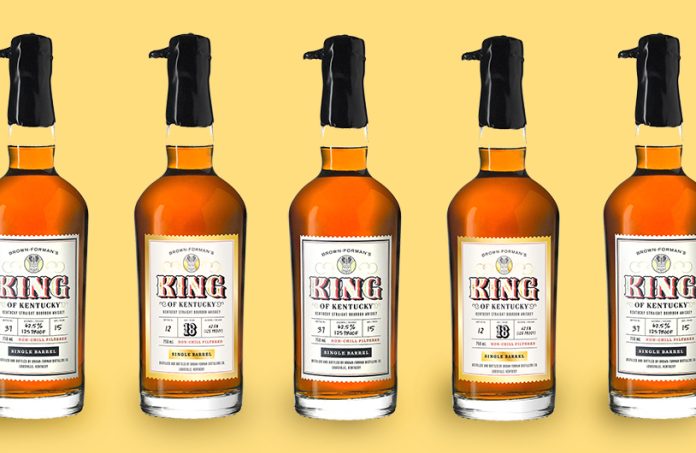 Brown-Forman’s upcoming “King of Kentucky” super-premium limited edition annual release is swinging its royal saber with the utmost authority. There will not be one, but TWO limited offerings for the 2022 release, a 15 year and 18 year bourbon, each at barrel strength 130 proof. The 15 year will be available be mostly in KY with small offerings in OH and IL while the 18 year will be sold ONLY in KY.

Per Master Distiller Chris Morris, the expressions are from two production days, two years apart. This is pretty cool and exciting, demonstrating the impact a few years can make on flavor differentiation.

Below is the press release directly from Brown-Forman with more details.

LOUISVILLE, KY, August 15, 2022 – King of Kentucky, a super-premium straight bourbon, is returning this year with the release of its fifth edition. Hitting shelves in August, two limited-edition expressions will be available to mark the 5th anniversary for the brand.

The first 2022 expression is a 15-year old Kentucky Straight Bourbon, featuring a premium embossed label with a stamp border and details. Approximately 3,500 bottles will be produced with a suggested retail of $249.99. While the majority of this year’s volume will remain in Kentucky, the expression will also be available in limited quantities in Illinois and Ohio.

The second expression is a very limited 18-year old Kentucky Straight Bourbon, featuring an embossed label with a gold-foiled stamp border and gold details. Approximately 250 bottles will be produced with a suggested retail of $349.99. The 18-year-old expression will be exclusive to the Kentucky market.

King of Kentucky was established in 1881 as a Kentucky Straight Bourbon Whiskey. Brown-Forman acquired the brand in 1936 from Selected Kentucky Distillers and, by 1940, converted it to a blended whiskey until it was discontinued in 1968. In 2018, Brown-Forman revived the label paying homage to the brand’s past. “We are excited to celebrate the fifth year of the King of Kentucky brand with the return of two special expressions, ” said Master Distiller Chris Morris.. “This brand demonstrates Brown-Forman’s commitment to and expertise in the growing American Whiskey category.”

King of Kentucky is an annual release of a single barrel inventory featuring a barrel-strength, minimally-filtered proof presentation, with each release and every barrel bein unique. For this year’s iteration, Master Distiller Chris Morris chose two lots of barrels to set aside for the limited-release product; one from 2004, the second from 2006.

“This year’s releases come from two production days, two years apart,” said Morris. “This showcases what a difference two years at these extreme ages make on the color, flavor, and aroma of this wonderful whiskey.”

Due to the rarity of these barrels, there is no defined annual volume. Just like the extra time it takes for the liquid to mature, King of Kentucky’s package shows a personal craftsmanship. Every bottle comes enclosed in a decorative tin canister, and tells the story of its origin through the details on the front and back of its package. All are filled, bottled, wax-dipped, and numbered by hand with details including proof, age, warehouse location, lot number, serial number, and barrel number, all selected by Master Distiller Chris Morris.