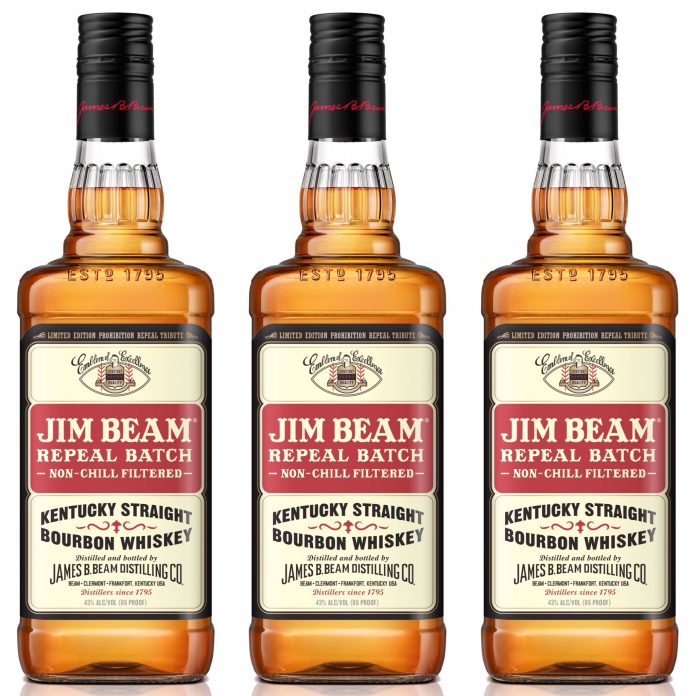 After years of setting the non-chill filtration standard with Booker’s, Jim Beam is taking non-chill filtered bourbon in a new direction with Repeal Batch.

Coming on the heels of last year’s Distiller’s Cut, Repeal Batch is a lower proof, non-chill filtered bourbon designed to reflect the approximate taste profile that Beam would have been producing in the late 1930s, post repeal.

Repeal-era products can be gimmicky, and there have been ample examples throughout the last decade of so-so products trying to approximate the taste, recipe, and quality of something that would have been served during or after Prohibition. But Beam is up to something a little different: they’ve focused in on the texture of the whiskey, and done away with the chill filtration process for this batch.

Chill filtration is a process during which the soon-to-be-bottled whiskey is cooled to an unnaturally low temperature, forcing the formation of solids and ice crystals around things like esters and proteins in whiskey coming out of the barrel. These compounds add great flavor and texture to the whiskey they’re part of, but they present a cosmetic issue: they can cause the whiskey to turn cloudy in the wrong storage conditions, like extreme heat or cold. That can turn customers off.

This is where Repeal Batch is unusual. Typically, non-chill filtered whiskeys tend to be bottled at higher proof points, because higher alcohol content helps prevent that clouding. At 86 proof, Repeal Batch could be low enough in alcohol that non-chill filtered might cause some of that dreaded clouding distilleries are always worried about (we left ours in the fridge overnight, and it came out as clear as it went in).

This bottle is definitely worth the price, if only as a tasting experiment, but if you’re used to high octane pours, this probably isn’t for you as a pleasure pour. 86 is a nice proof point for the entry-level drinker to approach non-chill filtered whiskey for the first time, and really see the difference. It’s richer, more palate coating, and while it’s not quite as good as Distiller’s Cut was months ago, it’s another praiseworthy testing of the market from the folks at Beam.

With an MSRP around $18, this is a bottle of bourbon that will give your cocktails that extra layer, and grease the wheels with you novice bourbon drinking friends. It’s available on shelves now.