Jim Beam filled its 13 millionth barrel last April. They’ll probably hit 14 million in 2016. I can’t find a number for Jack Daniel’s but I’m sure it’s more than that, so Heaven Hill is a fairly distant #3. I have to believe, however, that there is another big gap to #4, which may be Buffalo Trace.

Founded in Kentucky, still based in Kentucky, and still owned by the same Kentucky family, Heaven Hill has always believed in bourbon. During the dark days of the 1970s and 80s, Heaven Hill kept making bourbon year round, while other distilleries went dark for many months at a time. Although their Evan Williams brand is the #3 American straight whiskey (after Jack Daniel’s and Jim Beam), Heaven Hill bourbon is in many other brands, made by Heaven Hill and others.

Although bourbon and rye are hugely important for Heaven Hill, and are the only products they make from scratch, they have a full portfolio of products most of which are bottled at their Bardstown headquarters. They buy un-aged brandy from a California distillery, age it in Kentucky in used bourbon barrels, and sell it under the Christian Brothers and Coronet brand names. They buy huge quantities of grain neutral spirit to make vodka, gin, blended whiskey, and myriad liqueurs. They import and bottle rum, tequila, cognac, scotch, and Irish whiskey. Their label room contains something like four-thousand different labels. 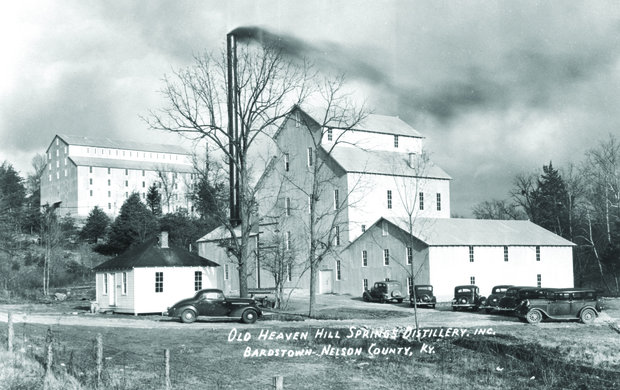 In addition to bourbon, and in much smaller quantities, Heaven Hill makes rye whiskey, wheat whiskey, and corn whiskey. The fact that a secretive company like Heaven Hill publicizes its bourbon production milestones is significant. The company’s long success as a bourbon maker is a source of pride for everyone in the organization, from the executive suite to the bottling line. And it is how the company wants to be perceived by the public. The face they turn to visitors through their Bourbon Heritage Center is that of Heaven Hill, bourbon maker; not Heaven Hill, broad portfolio distilled spirits company. No one travels to Bardstown to watch them bottle HPNOTIQ, even though that blue stuff pulls in a lot more money than the bourbon does.