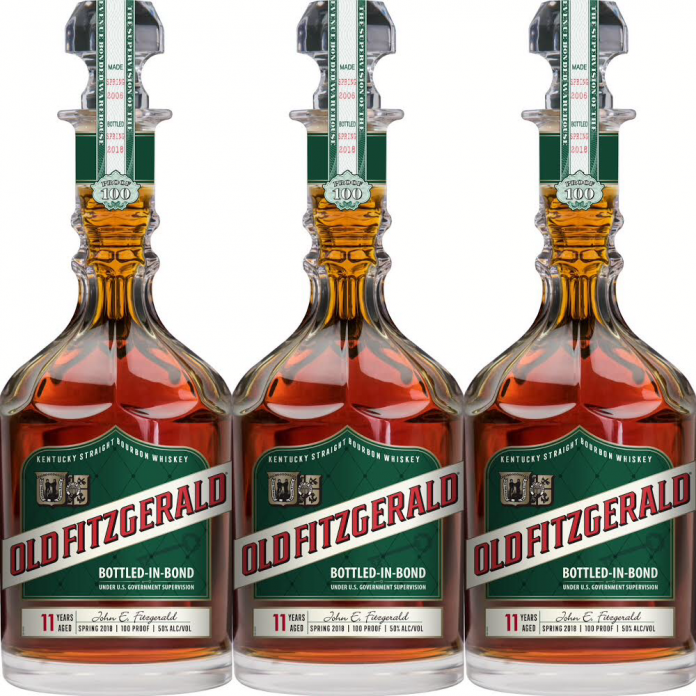 Heaven Hill Distillery announced today the release of a limited-edition series of Old Fitzgerald Bottled-in-Bond Kentucky Straight Bourbon Whiskey bottlings to be released each spring and fall. Bottled in an ornate decanter, the series reflects the traditions of both the Old Fitzgerald lineage and the bottled-in-bond designation. The newest edition of the Old Fitzgerald family will launch this spring with an 11-year-old bottling.

Heaven Hill is proud to offer a premium, allocated product within the Bottled-in-Bond class that showcases the authenticity and quality of the American Whiskey portfolio. Acquired in 1999 by Heaven Hill, the legendary Old Fitzgerald line is well-known for its distilling pedigree and intriguing story behind its namesake, John E. Fitzgerald. The first release is comprised of barrels produced from February through May of 2006, and bottled in April of 2018.

The newest bottle is inspired by an original 1950’s Old Fitzgerald diamond decanter, as the brand was traditionally bottled in artistic decanters of all shapes and sizes. The label features the time-honored graphic of a key, commemorating an important element in original labels and the brand’s slogan since the 1940’s, “Your key to hospitality.” Kentucky’s state seal and a prominent brand banner replicate a pre-Prohibition label. Spring editions will be denoted with a green label and fall editions with a black label. The age will change with each edition and will also be indicated on the bottom of the label.

Each edition’s tax strip, which has always been a signature of transparency on bottled-in-bond products, will disclose when the liquid was produced and bottled.

“For 82 years Heaven Hill Distillery has nurtured and produced historic brands of quality and heritage,” said Heaven Hill Distillery Master Distiller Denny Potter. “It is an honor to join a famous line of distillers behind the Old Fitzgerald name and to continue to uphold the tradition of the brand through its bottled-in-bond designation, which dates to the early 1900s.”

Larceny Bourbon, a descendant of the Old Fitzgerald line, tells the legend of Treasury Agent John E. Fitzgerald who held the keys to the bonded rickhouses, and helped himself from barrels containing only the finest bourbon. The agent’s selections became known around the distillery as “Fitzgerald barrels” and were used to create a soft, wheated bourbon known as “Old Fitzgerald.”

The Old Fitzgerald Bottled-in-Bond Series will be available in the 750ml size on an allocated basis each spring and fall throughout the next five years. The spring 2018 edition meets the strict requirements of a bottled-in-bond: the product of a single distillery from a single distilling season, aged a minimum of four years, and bottled at 100 proof or 50% alcohol by volume. The first edition is available at a suggested retail price of $110.00.