Home Lifestyle A chat with the founder of Bed & Bourbon 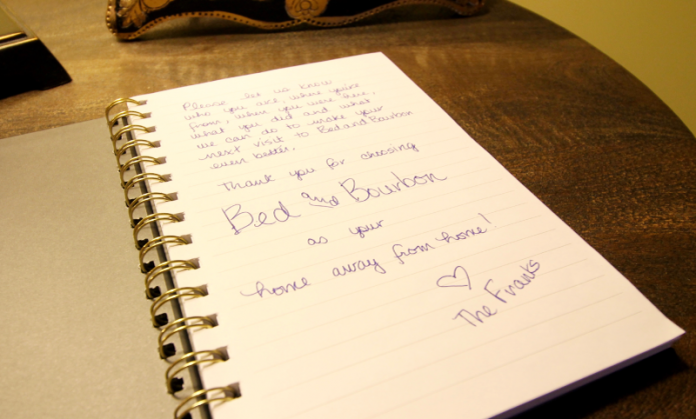 Since launching the Best Places to Stay in Bourbon Country initiative, we’ve been busy combing through the nominations (162 of them, in fact). One in particular caught our attention – it is called Bed & Bourbon – and prompted a 1×1 discussion with the founder, Jonathan Klunk. The address is 2042 Frankfort Ave, Louisville, KY 40206; which is considered to be a walkable area close to restaurants, Bourbon bars & local shopping. 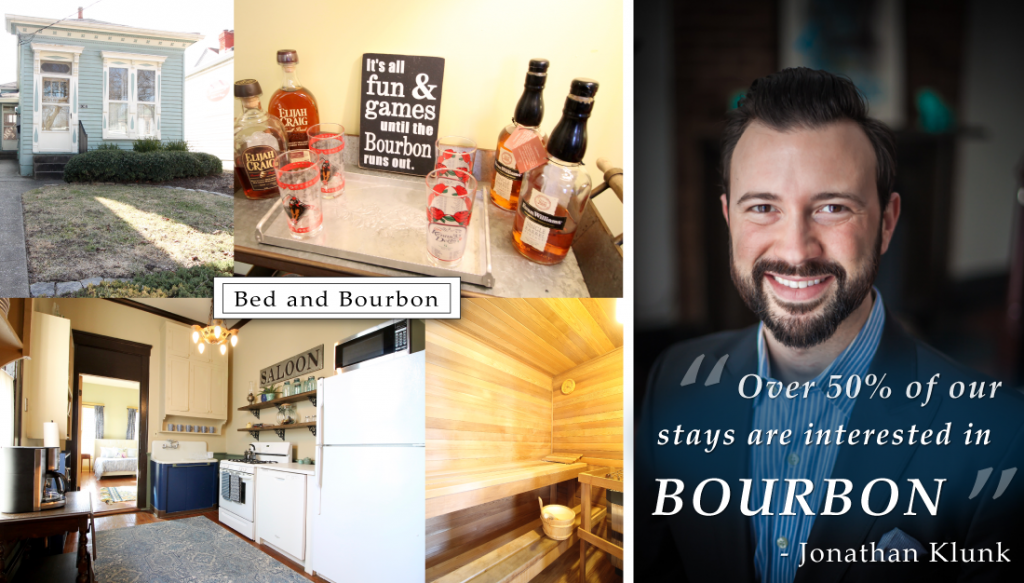 By ‘stays’, he means a single check-in and check-out for one of the 30 properties that he manages. His company, Key Source Properties, is a short-term rental management company and they are noticing a dominant theme for what guests want – Bourbon. “The interest in Bourbon is driving our focus on travel packages and curated experiences. Touring the distilleries are great, but it’s not all of it. Bourbon is a gateway for people to come enjoy Kentucky’s natural beauty.”

Back in 2014, Jonathan Klunk & his partner Justin Reid got started with their own personal property. They had purchased a duplex, moved into 1 unit and converted the other to a short-term rental. They first got the idea from an AirBnB in Nashville – it was a converted garage space in Nashville, where they were able to interact with the host. They learned some tricks of the trade, and took their first chance for Derby in 2014. “There was no data,” says Jonathan with an unabashed honesty, “this was the first of many risks in life & business. Derby was successful, and May/June booked up solid.”  Their first unit fetched $1100/night for the Derby weekend.

At some point, the pair gained recognition for their level of service and the eye they had for staging a short-term rental. So they decided to expand. “We were confident in the model, it was taking great care of us. People started asking us for help, and we started with consulting and eventually worked our way into managing the units themselves.” In April 2017 they formed the business, and Jonathan left his technology sales career behind for a path of entrepreneurship. “We realized early on that this is a job that needs to be done at scale. We paused, and asked ourself if this was worth doing. Because we were dsigning it from the ground up. It was an investment of time into building scale; we had to ask if a few hundred dollars/month was worth the pain of building scale.”

After 2 months they grew from 5 to 30 properties and their current annual projected number of stays is 4500. So you could say they have their pulse to what it is the consumer wants. “The personal nature of the short-term rental service lends itself to a connection, they tell us why their coming. From the beginning, we’ve been a concierge to the city. We have the ability to send a lot of traffic to restaurants and distilleries.”

Some common questions include, “how far is your home from the Evan Williams Visitor Experience?” Or, “Where do I go for a great Bourbon Bar?” Sometimes Bourbon is the primary reason for their stay, while other times it’s an auxillary component to a business trip. In both cases, Jonathan and Justin were surprised with how many people were inquiring how to experience Kentucky’s authentic Bourbon experiences. So they are now creating custom-curated Bourbon experiences at restaurants and bars, throughout Louisville. “How about a curated 4-course Bourbon Culinary experience? Start with a drink at this place, an appetizier at another, and dinner somewhere else. We realized, we didn’t need to craft the experience; just curate the experience.” The artisans & experts were already there, and their role lay in connecting the two and curating the experience, based on time and budget.

Capitalizing on the opportunity to help Bourbon tourists to plan their trip from the start, Jonathan and Justin recently launched LouisvilleBourbonTravel.com – a resource for planning your stay while you’re in Bourbon Country. There one can find examples of well-curated rentals sprinkled throughout some of Louisville’s famed neighborhoods (Downtown, NuLu, Preston). When asked about the stylized look that the short term rentals project, Jonathan quips: “very early in my career, I had the opportunity to work on some homes in Manhattan, Key West, and other marquis locations. It comes down to trying to live the most glamorous life possible, on a budget of course!” Being somewhat coy, he’s quick to point out that Justin’s background in photography and digital media help to visually tell the story of their rentals.

Recent article on the Bed & Bourbon from Louisville Business First:

“How this Frankfort Avenue house became a bourbon-themed rental home“