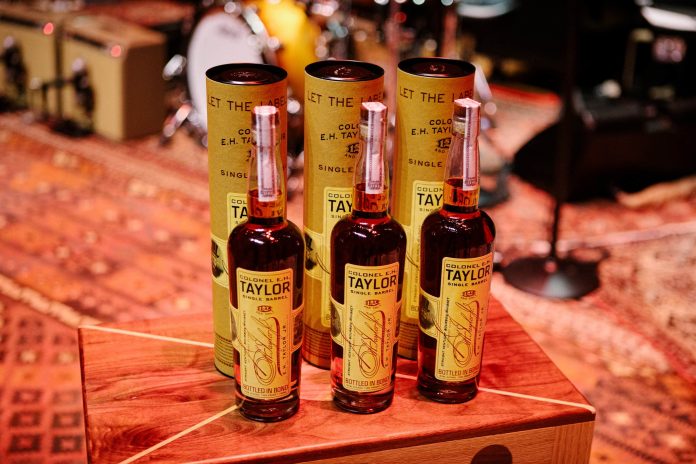 The Bottled in Bond Act, which was passed on March 3,1897, guaranteed the integrity of the whiskey to the American consumer, and among other things, guarantees only water can be added to the whiskey.

This is the second year for the partnership between E. H. Taylor, Jr. Bourbon and Chris Stapleton’s charitable fund.  Two prize packs are available for bidding now through March 17, 2022 on charitybuzz:

“The first glass of E.H. Taylor, Jr. I ever had was in the studio. Vance Powell, engineer of both music and good times, brought a bottle to the session for inspiration. That week we recorded an entire album, and that album was ‘Traveller.’ We’ve made it a point to keep a bottle around ever since. We’re proud to celebrate the 125th anniversary of Bottled in Bond Day with this special Single Barrel bottling. All proceeds raised by these bottles will benefit Outlaw State of Kind, our charitable fund that is dedicated to giving back to the people and communities that continue to play a vital role in our journey,” said Chris Stapleton.

“We’ve very excited to be able to partner once again with Chris Stapleton and Outlaw State of Kind,” said Sara Saunders, vice president, American whiskey.  “We were lucky enough to partner with Chris last year, and we are very pleased his charitable fund was able to raise so much money over the past year for so many different causes.  We’re excited to kick off this second year of partnership on the 125th anniversary of Bottled in Bond Day, and with two great prizes going live today, we hope fans of both his music and our bourbon can help out even more needy causes.”

The E. H. Taylor, Jr. Single Barrel was distilled at Buffalo Trace Distillery and put in the barrel on June 3, 2009.  Bottled in mid February, this bourbon is over 12 years of age, and like the act its namesake fought so hard to pass, is Bottled in Bond at 100 proof.

Like the other E. H. Taylor, Jr. releases, this Single Barrel is packaged with elements of Taylor’s original bottlings from the turn of the 20th century, a vintage label bearing his signature and a distinct canister reminiscent of Taylor’s whiskey package from over one hundred years ago.  The canister gives a nod to this unique bottling with a commemorative sticker noting the 125th anniversary of Bottled in Bond Day and the partnership with Chris Stapleton.

Buffalo Trace Distillery is celebrating Bottled in Bond Day in various other happenings as well, including expanded offerings of its Old Taylor Tour and activations in various markets across the United States.

E. H. Taylor, Jr. was instrumental in getting the Bottled in Bond Act passed.  Prior to its passing, disreputable sellers would put items like tobacco juice, turpentine, iodine or other unsavory and potentially poisonous additives to a barrel of whiskey to fill it back up, and/or to give the liquid color.  Back in those days, whiskey was usually delivered by the barrel to a local saloon, general store or pharmacy where customers could fill up their own jug directly from the barrel, or retailers could bottle it up for resale on the spot. The Bottled in Bond Act was the first consumer protection law passed, pre-dating the Pure Food and Drug Act by nine years To learn more about E. H. Taylor, Jr., click here.

About Outlaw State of Kind

Outlaw State of Kind is Chris and Morgane Stapleton’s charitable fund that supports a variety of causes that are close to their heart.  The Outlaw State of Kind Fund was founded in 2016 and is administered by the Community Foundation of Middle Tennessee.