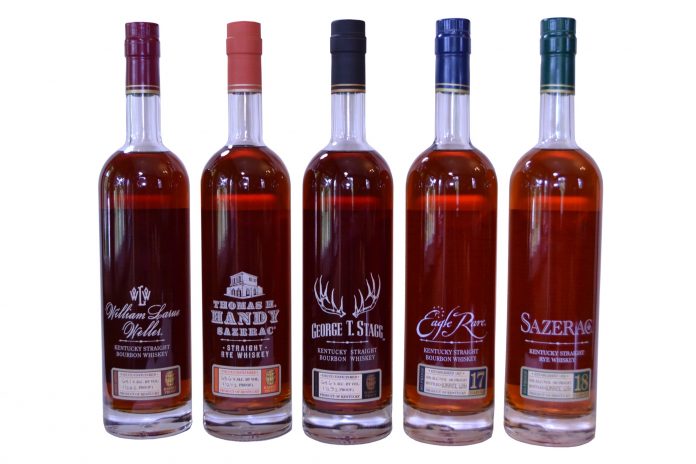 Buffalo Trace Distillery is releasing its 2017 Antique Collection. The collection will once again feature five limited-release whiskeys of various ages, recipes and proofs.

Master Distiller Harlen Wheatley notes, “The team had another great year with the Antique Collection. From distillation, to barrel selection, to bottling, this year’s collection showed very well. I was particularly excited about the William Larue Weller with its extra richness, and the Eagle Rare 17 seemed more rounded and full of flavor. None of these disappointed.”

The Antique Collection was introduced more than a decade ago. It’s 2017 bottlings will be available in limited quantities this October for a suggested retail price of $90 per bottle. For more information click here.

Here’s what fans can expect this year:

George T. Stagg – The uncut and unfiltered powerhouse favorite of the Antique Collection, George T. Stagg weighs in at 129.2 proof this year. This year’s release contains bourbon from barrels filled in the spring of 2002. This batch contained 309 barrels full of Buffalo Trace Mashbill #1, a few more than last year. Storage location of these barrels varied across warehouses C, K, M and Q.

William Larue Weller – The Antique Collection’s uncut, unfiltered, wheated recipe bourbon is William Larue Weller. The 2017 offering was distilled in the winter of 2005 and aged in Warehouses D, I, and P. This bourbon registers in at 128.2 proof.

Thomas H. Handy Sazerac Rye – Thomas H. Handy is uncut and unfiltered straight rye whiskey. This year’s Handy was distilled in the spring of 2011; aged on the third, fourth and fifth floors of Warehouses K, L, and Q, and weighs in at 127.2 proof.

Eagle Rare 17 Year Old – The 2017 edition of this Buffalo Trace Mashbill #1 has been aging on the first, second and third floors of Warehouses C, K and P. This 90 proof bourbon was aged for seventeen years.

Sazerac Rye 18 Year Old – This 2017 straight rye whiskey release was barreled in the spring of 1998, and then put into a stainless steel tank in 2016 to stop further aging and evaporation. It is bottled at 90 proof.