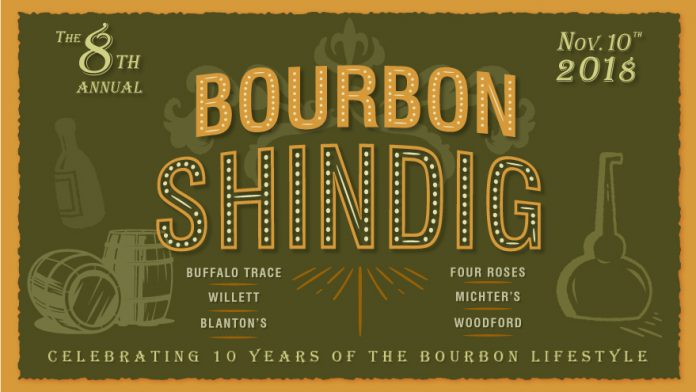 The Bourbon Shindig is back – and with big name bottles, more distilleries, and a swanky new spot to stay, you wont want to miss out. Click here for earlybird pricing on tickets!

Land in Lexington on Thursday, November 8th, and check into the trendy 21C Museum Hotel in Downtown Lexington. Rest up – your weekend is about to get wild.

On Friday the 9th, we’re off to behind the scenes tours at two of Kentucky’s best loved distilleries. First up, the famous Freddie Johnson, a 2018 Bourbon Hall of Fame Inductee, will give us a special hard hat tour and tasting at Buffalo Trace Distillery. Brands like Pappy Van Winkle, Blantons, and the Buffalo Trace Antique Collection all call this place home – see where they’re distilled, barreled, and bottled, then enjoy lunch on the grounds.

Next we’ll head to Four Roses, where we’ll learn about ten unique recipes they make from 5 mash bills and 2 proprietary yeast strains. We’ll wander through the Spanish Mission architecture and taste through a specially curated session, then head back to Lexington, where you’ll be free to explore downtown for dinner.

On Saturday the 10th, we’ll pick you up for a VIP tour of one of the world’s most celebrated horse farms, Coolmore’s Ashford Stud. You’ll get a chance to get up close and personal with some of the greatest living thoroughbreds and see their lavish way of living once they retire from racing and go on to a career in breeding. This isn’t open to the public, but we’ll get to stroll through the stallion barns and get a glimpse into the opulence that these Triple Crown winners enjoy. If we’re lucky, we’ll get to share a moment with Justify, who won the 2018 Triple Crown. After that, we’ll all rest up for the Bourbon Shindig later that day.

Just a short walk from the 21c Hotel, we’ll gather at Belle’s Cocktail House (one of America’s Best Bourbon Bars) for this Bourbon-immersion experience. The “Shindig” tradition invokes a social gathering that is both genteel and casual. The Bourbon Shindig brings together dozens of rare Bourbons and great Southern-style food under one roof. You’ll taste multiple rare & exclusive Bourbons, as you stroll throughout the 3 floors of Belle’s Cocktail House.

Participating Bourbons include selections from the Buffalo Trace Antique Collection (including Pappy), and Four Roses expressions. Dozens of other Bourbons will be available as well, including Michter’s, Blanton’s, & Woodford Reserve.

[note: we’re adding more Bourbons, so be sure to follow our social media for updates]

We’d love to have you join us for our 10th anniversary celebration weekend.