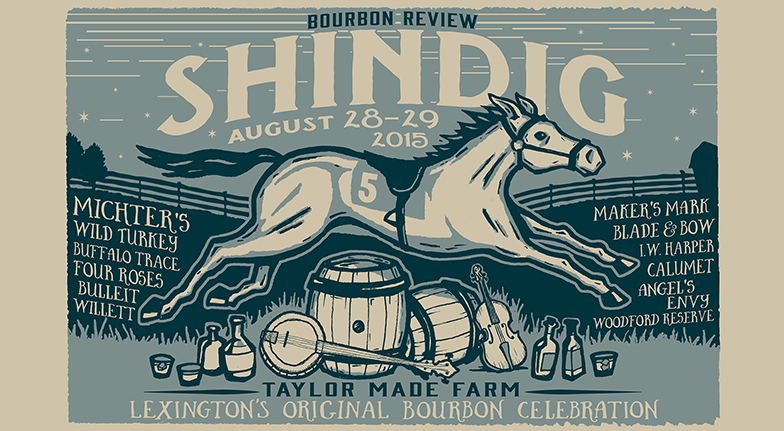 The perfect Bourbon Country Getaway. Escape to the birthplace of Bourbon, and interact with the Bourbon artists who make them, all while being surrounded by horse farms coveted by sheiks, royalty and barons of industry. The rolling hills of the Bluegrass will play home to your culinary senses, during this 3 day Bourbon Country Getaway.

Sample over 50 Bourbons at the famous Taylor Made Horse Farm while dining on food from one of Bourbon Country’s best chefs Holly Hill Inn‘s Ouita Michel and music by Billy Goat Strut Revue.

Right out of the gates on Friday night, two of Kentucky’s culinary treasures come together: small-batch Bourbon & country ham. The publishers of The Bourbon Reviewwill guide the group through a flight of Michter’s American Whiskies. This will be paired with cured hams; 3 years, in the Spanish-style, from Woodlands Pork. The tasting will be privately hosted, at Belle’s Cocktail House.

On Saturday, we’ll get started at Taylor Made Horse Farm. Family owned and operated since 1976, Taylor Made Horse Farm is located on a 1300-acre horse farm in the heart of central Kentucky. A leading sales agency, best known for helping clients market and sell their Thoroughbreds at public auction, Taylor Made is also home to an impressive roster of stallions, including Eskendereya, Northern Afleet, Old Fashioned, Graydar, and Astrology.

After that, Bourbon immersion sets in as you’ll privately tour Four Roses Distillery.Surrounded by the picturesque landscape of Anderson County (near Lawrenceburg, KY), the facility was completed in 1910. The Spanish Mission-Style architecture is unique in Bourbon Country. Jim Rutledge will lead the group through a private tasting, featuring the signature mash bills of Four Roses. Lunch will also be provided by James Beard nominated chef, Ouita Michel, from her Wallace Station restaurant.

The next stop is Wild Turkey Distillery. Home to Master Distiller Jimmy Russell, who counts 60 years of experience under his belt. We’ll taste a number of their famous Bourbons, in their iconic new tasting room.

Capping off this amazing weekend is a showcase of the best things Bourbon Country has to offer at Taylor Made Horse Farm. You’ll be whisked to & from the event, directly from the Gratz Park Inn. Music, cocktails, Bourbon tastings & a culinary cornucopia await your senses, to the background of strolling minstrels picking bluegrass. The genteel manners come naturally, to those donning their best “resort casual” attire. Sample fine bourbons and get a dose of Bourbon education from the master distillers mingling with the crowd. Tap your feet to live bluegrass. And tuck into Southern-inspired fare as the founders of The Bourbon Review show you the best of the Bourbon Lifestyle. How’s that for Saturday night in Kentucky?