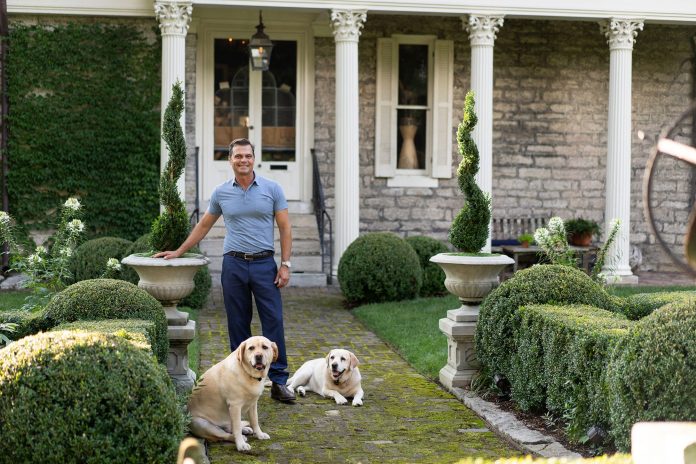 Nestled deep in downtown Lexington, Kentucky, a historic home from 1851 once sat boarded up in disrepair, surrounded by its secret gardens. That is, until Kentucky native and great American gardener, Jon Carloftis, revived it into his private oasis in Bourbon Country.

Within a year of the property’s restoration, Carloftis received the highest honor in the state for historic restoration of the home and garden, now known as Botherum. He used his decades-long career of designing and installing rooftop gardens all over Manhattan, where he had become one of America’s pioneers in rooftop and small space gathering in New York City, to resuscitate the forgotten Kentucky estate.

After restoring Botherum, the 10th generation Kentuckian narrowed in on two positions that combined his love for gardening and bourbon. Carloftis views these two ongoing projects as part of his legacy: the grounds at Maker’s Mark Distillery and Castle and Key Distillery.

“I’m proud of both of them,” said Carloftis of the two distilleries. “You have to have a legacy, and those two things are two of mine because, you know, with a private house, someone else could buy it, and they could just let the garden go to hell!”

While Carloftis has built gardens for the big names around the country such as Julianne Moore, Edward Norton, Mike Meyers, and Google, his approach is simple: First, figure out the problems that need fixing (views, noise, privacy, etc.) then work with the interior of the space to pull the same feeling outdoors for a seamless connection. Carloftis’ builds all of his gardens to entertain and enjoy the outdoors through good design and knowledge of plants.

Carloftis says he took two different approaches with the bourbon distilleries with the same goal in mind for each—having it center around experience and tourism. With Maker’s Mark Distillery, located in Loretto, Kentucky, his inspiration came from color.

“I’ll tell you what, people respond to color, and we took out anything that wasn’t the color of the bottle,” said Carloftis. “That’s what we used as our inspiration. We had a lot of burgundy leaves; we had a lot of that color of the label, that almost yellow color, and of course, the famous red. That deep red.”

This approach falls in line with Maker’s Mark mentality, which has always emphasized marketing.

“I just love certain colors, and I think its representative of what you are with your brand,” said Carloftis.

With the grounds at Castle in Key, which had sat abandoned for well over a hundred years, Carloftis’ focus was saving as much of the existing foliage as possible, reminding him a lot of his own home, Botherum.

“What I was trying to do there is retain,” said Carloftis. “It was kind of in a crumbling state, a state of decay like Botherum was when we got here.”

In 1887, Colonel Edmund Haynes Taylor Jr. built Castle and Key in Millville, Kentucky. What he constructed, featuring a castle, classical springhouse, and sunken gardens, became the birthplace of bourbon tourism. Flash forward to 2012, the vegetation was so overgrown a flashlight had to be used – in the middle of the day – to navigate.

“What I was constantly trying to do was say, ‘Hey, let’s fix it,’” said Carloftis. “We want it to work. But let’s don’t fix it too new because it’s going to lose the feeling. Before you know it, it can be gussied up so much that it not even old anymore. There’s just a fine line, and they knew how to do it down there.”

When Carloftis first started on Castle and Key, he said there were unique features that stood out to him, which he designed around. Using one of his rules of gardening: “Accentuate the positive.”

“When I went into that sunken garden and found out it was a sunken garden, I was like, ‘Who is this person?’ said Carloftis. “Just like when I went into Botherum and bartended [a party] there in 1986, I looked up, and I saw these 14-foot ceilings, and I was like, ‘Who in the hell would make a 14-foot ceiling in a hallway?’ I don’t know, but I want to know that person because they’re daring.”

Carloftis said that when designing both the gardens at Maker’s Mark and Castle and Key, he focused on creating areas for people to linger – by creating spaces where people would naturally stop to take pictures.

“It’s a photo opportunity,” said Carloftis. “You have to design the landscape to get close enough to it where people can use it as a photo opp. If you build it, they will take their picture! Having long little vistas where you have a long walkway, or you have an arch, it’s that kind of thing that people really respond to.”

Creating Your Own Bourbon Oasis

For those looking to create their own bourbon oasis, where they can enjoy America’s native spirit outdoors, Carloftis encourages people to identify problems in their spaces first, then add to it.

“What I do is, what I do with everything, I deal with the problem,” said Carloftis. “No matter where you live, it might be a 40-million-dollar penthouse in New York City, but there’s an ugly view. There’s an air conditioner, garbage cans. Some people have the driveway set up, so all you’re doing is looking at cars, so you can block it a little bit.”

Once you’ve dealt with the problems, Carloftis says you can focus on design.

“If you have a view, find it and then celebrate it,” says Carloftis. “If you have an ugly thing happening, and everybody does, its always something, you know, then you can tidy a little bit. That’s the first step, then the aesthetic and the design is after, that’s what I do after. You got to fix the problems first; then, we’re going to talk about pretty.”

When focusing on design, Carloftis suggests adding these six elements into your design.

“Think about the outside, like inside your house. You want to create a room. You want to create boundaries. So maybe putting trees around the back yard, putting containers on your back patio or deck. It creates a room where you go, ‘Oh, I’m in a space.'”

Add The Sound of Water

Have An Area of Shade

“With lighting, do the basics, do the paths, so you have a way to get from here to there, and you have to be safe. Then if you want to go a little bit more, do your trees first, and then if you have a nice architectural element on your house, whatever it is, light up the feature. I have these columns, so I do those.”

Use Local Elements for Walkways

“Were here in Lexington, so I put down big limestone because limestone is indigenous. Down on [at my family’s home] on Rockcastle River, I used brown sandstone because that’s what is there. If you use another type of stone, it just doesn’t look right; it looks like it’s from Mars. [At my home in] Buck County, [Pennsylvannia] everything was red up there, it was some kind of shell, and you crush it up and make driveways with it and everything, but it just felt right because its what’s local. It’s appropriate because it’s local.”

“What I think the most important thing is just having it comfortable. That’s what makes people feel good. You know, if my dog can’t lay in it, I don’t want it!”

To tailor your outdoor space specifically for bourbon lovers, Carloftis recommends adding herbs that can be used in your favorite cocktails; he specifically suggests lemon verbena.

“You know how, when you’re giving bourbon to somebody who thinks they don’t like bourbon, squeeze a lemon in it, and lemon verbena will do that,” said Carloftis. “It’s great to put in a sip of bourbon, put a little spring in there.”

If you make it past the breathtaking gardens surrounding Botherum’s estate and into the historic home, you’ll find Carloftis’ paradisiacal mixture of high-end designer pieces and junk store finds. When hosting, Carloftis suggests bringing indoor elements outside and to add in something special for fun.

“When you come to my house, you never feel like it’s too fancy, even though I have pretty things because I love pretty things,” said Carloftis. “I love the whole idea of barware, sterling silver straws, muddler spoon, all that stuff makes it fun. Even using old Derby glasses, I probably have a hundred of those. Every now and then it’s fun to break those things out. It’s nice to drink out of fun stuff and make it fun when you’re entertaining. Kentucky has traditions, and bourbon has so many traditions, it’s fun to introduce other people to our world.”