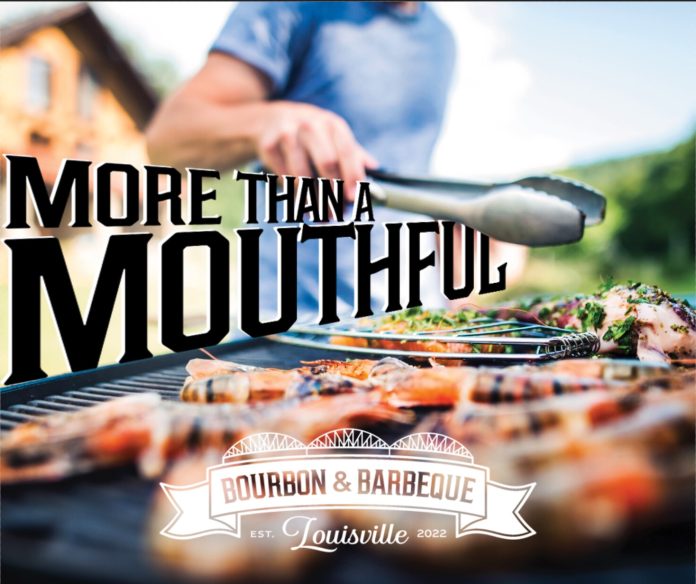 IMPORTANT NOTICE: THIS EVENT HAS BEEN POSTPONED FOR 2023.

In early November, “Bourbon & Barbeque Louisville” will feature top barbecue pitmasters and chefs from around the country for a culinary experience like no other. Bourbon from around Kentucky will be paired with an eclectic mix of barbeque, ranging from pulled pork and brisket to Caribbean, Moroccan, South African, Korean, and South American barbeque, including plant-based styles.

The event introduces 20+ pitmasters/chefs and 20+ Kentucky distilleries in one place. Each pitmaster/chef is encouraged to prepare a dish using smoke & fire and offer this in what will be called a “chef’s kiss” portion (2 – 3 oz. max). The distillers will create a bourbon-based 4-oz. cocktail to complement the “chef’s kiss.”

Bourbon & Barbeque Louisville will take place at Louisville’s Waterfront Park, at the Swing Garden and The Big Four Lawn, November 11 & 12, 2022. Tickets range from $250-$400 all-inclusive and are on sale now. People are encouraged to use the hashtag #BBLWaterfront.

The idea for this event started, fittingly, over a glass of bourbon between Mayor Greg Fischer and entrepreneur and philanthropist Brook T. Smith. This event has something for everyone, pushing the boundaries of foodie events categories.

“We’ll combine food, music, entertainment, podcasts, interactive stations, and discussions with bourbon experts and pitmasters. It will create a celebration that will become a tradition of the holiday season kickoff in Louisville and give back to the city – and the Commonwealth of Kentucky – for years to come,” observed Smith, the event’s benefactor.

“There’s no question that Louisville continues to build on its reputation as a world-class hospitality city and the addition of this new celebration will take us to the next level,” said Mayor Greg Fischer. “Thank you to Brook T. Smith for being a great citizen and for helping bring this epicurean adventure to our waterfront this fall.”

The event coincides with Louisville’s Mayor’s Week of Valor supported by the Veterans Community Alliance of Louisville (VCAL). VCAL’s mission is to promote veteran-friendly community relations in Louisville by creating an integrated support network for veterans and their families. More information on the city’s Office for Veterans and the Week of Valor can be found here.

“A special thanks to Wayne Hettinger and Visual Presentations Inc. for securing a Military Color Guard from VFW Post 1170 to present Colors for the National Anthem to take place in conjunction with a flyover presented by Smoke On Aviation,” said Smith.

The presentation and the flyover will take place on Friday, November 11 at approximately 4:30 p.m. Event organizers are also honored to welcome several pitmasters who have served in the U.S. military in different capacities.

Bourbon & Barbeque will build upon the growing Bourbonism brand crafted by the city of Louisville and Louisville Tourism and reinforce its reputation as the beating heart of bourbon craft and culture. The vibrant city is home to 10 distillery experiences and the Urban Bourbon Experience, a citywide trail that’s filled with award-winning micro-distilleries, exhibits, and craft cocktail destinations.

“The growth of culinary tourism has been extraordinary over the past decade,” said Cleo Battle, President and CEO of Louisville Tourism. “The Bourbon & Barbeque Louisville event will only serve to expand that trajectory.”